Disclaimer--I wrote this entry sometime in July, but of course, it's taken me several extra days to post. Enjoy!

This is what family, community, and love looks like: 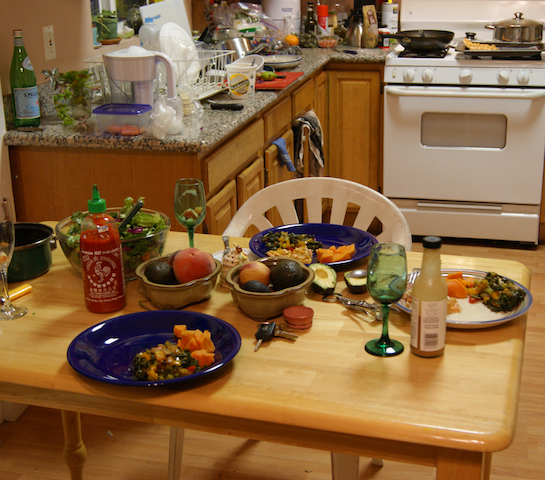 When we last left off, I was residing on the shore of Lake Merritt and spending all my free time basking in the sun and running from geese (I've got a BAD case of ornitophobia). As June started coming to a close, things were getting down to the wire and I still hadn't found a place for July. However, one day, I logged onto the 'Book of Face' and saw that some homies that I had almost lived with earlier in June were looking for a one month sublet. Voilà! July, set. And just like that, I was done looking for housing for the summer (I had already worked out August--to be revealed in a later post!).

My current home is a ten-minute bike ride from my June home/the Lake Merritt area, in an area of East Oakland called Fruitvale. Let me just say that Oberlin really promotes study abroad programs; and, while I think it's extremely important for folks to experience life in other countries, there is just as much knowledge (if not more) to be gained from living in different parts of the country, in your own country. I never had the opportunity to study abroad, but I feel extremely fulfilled by my experiences living in a different region of the US.

Why is this relevant to my home in East Oakland? I'll tell you why. By the end of this summer, I will have lived/spent substantial amount of time in five drastically different regions of the Bay Area: 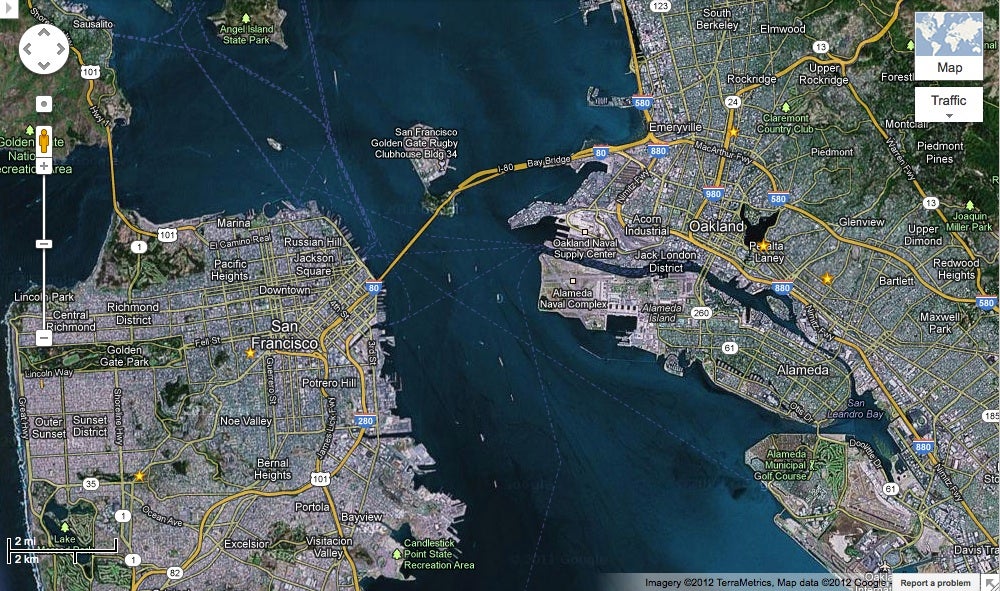 Do you see the little stars? You better believe it took me awhile to figure out a good way to do this.

1. Lower Haight, San Francisco
2. North Oakland
3. Lake Merritt Area, Oakland
4. Fruitvale/East Oakland
5. West Portal, San Francisco
(My lifelong spoon mate/dear friend, Erin, lives in West Portal and also house sat in this area, so I spent quite a few nights in this neighborhood. Let me tell you that some of the wildest parts of my summer took place in West Portal; two words, chickens and predators. The suburbs are insane. I digress.)

Since I'm a total academic, of course my natural instinct is to approach my immersion in a variety of different locations as a huge case study. While you read about it in books and know it's a fact of urban society, when you are actually existing in communities, issues like gentrification and accessibility to food and transportation become extremely real. I think my awareness was sparked by my experiences with mobility this summer. Having to constantly move, in addition to commuting to work in the city (SF), without having a car at my disposal has definitely made an impression on me. At my home right now, I live halfway between two BART stations (BART is the trans-Bay public transportation system for the area). Because I'm at such an in-between location, I've really come to depend on my bike to get to BART to commute to SF for work, in addition to utilizing biking as my main form of transportation to get around the area in general. While this block is lucky enough to have a bus that runs right on the corner, public transportation ADDS up. Vice versa, while biking is essentially free, you definitely pay for it in sweat. Cash or sweat? I always choose sweat.

Although I tend to primarily choose biking because it's more cost-effective, I also choose biking because I have to be a serious varsity athlete in three and a half weeks. Working out has been extremely, extremely hard for me this summer. Constantly moving does not allow for a consistent gym membership--which brought me to thinking about proximity to resources. To go grocery shopping, I have to bike ten minutes to the Lake Merritt area because that's where the nearest grocery stores are located. That's right, plural: storeS. When I lived in that area, I had the choice of a three-minute walk to Lucky's, a ten-minute walk to Trader Joe's, or a 25-minute walk to WholeFoods (so maybe a 5-10 minute bike ride?), as well as access to tons of restaurants and other amenities. Within walking distance from my home, there are two corner stores and two laundromats. Hmm.

Going back to my thoughts about exercising--my habitat in SF, as well as by Lake Merritt, have both had really great places to work out. In the Lower Haight, I was/will be (I'm returning for August) a skip away from Duboce Park and the Lake Merritt area has, you know, that lake. However, living in North Oakland and East Oakland has made running a nightmare. I didn't feel it so hard in North Oakland because I was only there for four days, but July has been rough. The reality of the situation is that there isn't a close, safe park (and definitely not a gym) to my home. I find this amazing, considering not two blocks away there is an elementary school. But instead of a park, on the corner of my block, there's a concrete lot with a fence around it that the neighborhood kids play in. I usually don't mind running on concrete; however, the sidewalks on this side of town are TERRIBLE (I often see older folks in motorized chairs and kids on bikes and scooters in the bike lanes on the roads because the sidewalks are the opposite of smooth). After one week, I had shin splints and could feel early-onset knee problems so I've definitely appreciated and utilized biking as an alternative (I've biked to Berkeley probably three or four times this week! Sixteen miles round-trip--but don't even get me started on Berkeley, this post will be twice as long).

Amidst all of these harsh realities, East Oakland has revitalized my sense of what the words community, family, and love mean in major, profound ways. My current home is a compilation of all of these things. Though I've only known my housemates for weeks, we definitely have formed a very real bond with each other; we're a family. Ana is a massage therapist and founder of Wild Seed Wellness, an organization that provides affordable massage therapy for queer and trans people of color. She also studied media and communications in school and is always working on a variety of projects, including photography, graphic design, and even a documentary. Additionally, she makes the most perplexing faces, makes me try any food I claim not to like, and has amazing body control because she was a gymnast and a cheerleader. Cleo is hilarious. She claims she's shy, but is the friendliest person I've probably ever met. We were instantaneous friends. She's a painter, but also plays in an adult softball league. Our relationship consists of cracking jokes and laughing like fools on an hourly basis. Also, she rides this hilarious little bike that has been dubbed her "pony" and literally I can't imagine her riding anything else. 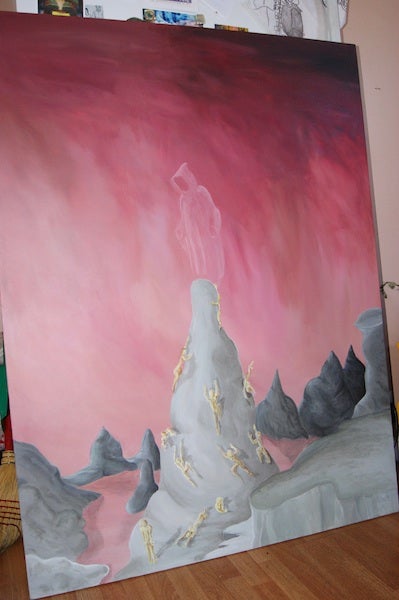 I'm cataloging Cleo's art for her, so she agreed to let me use a photo for this baby. This is definitely one of my favorites of all her work.

Probably my first or second day in the house, Ana and I ran after the tamale man (every Thursday and Sunday morning, a man drives his truck down the street honking a bicycle horn selling tamales. He tells me my Spanish is bonita and thinks Ana and I are sisters because we both have piercings in our faces), painted her bookshelf, walked down to the corner store and got popsicles, and sat on our back porch/roof. That day was the beginning of the quasi summer camp that has become our home. We have a huge book collection, as well as an extensive shelf of just art supplies. Our doors to our rooms are rarely closed, music is always playing, and we do an abundance of things together; from cooking dinner to hanging Cleo's paintings to going out dancing to sunbathing on the back porch. Being in this space has really opened my eyes to the ways in which we can queer, or redefine for ourselves outside of societal 'norms,' the concept of family. Giving care and receiving care from folks that aren't your blood or romantic partners is very real, and very possible. When you share space like this with folks, lines of what's 'mine' and what's 'yours' become blurred; eating 'someone else's food' and 'owing someone money' aren't issues because we are all simultaneously giving and receiving nourishment in some way to each other.

I'll admit, I'm very sad to go, but I'll be indefinitely grateful for the way the stars aligned this July. Postscript - Foods I now like that Ana shoved down my throat (well not all of them, but her forcefulness has made me branch out and try things of my own accord):

- Nutella (I know, I KNOW)
- roasted red peppers
- blueberries
- mango EVERYTHING (Disclaimer: this link involves a combination of profanity and lesbianism, and is in no way affiliated with Oberlin College. But it's all too relevant. Also, there's nothing wrong with profanity or lesbianism, I find myself fond of both, thank you very much.)
- Paneer
- Sriracha
- soy milk creamer
- mushrooms
- coconut water
- almond butter
- walnuts
- figs