Friday was the last day of classes. Sunday was the start of reading period, when everyone puts sleep on a back burner to relearn everything from the past semester in a 72-hour period before exams begin. As a cinema studies major, I don't have exams. If you're in a more traditional cinema class (think English, but your texts are films), you have final papers, but if you're in production classes, you're spending all your time editing, shooting (god help you if this is the case), editing more, printing to tape, and attending your class and other production class screenings. And this is all before the exam period starts. If you need a distraction, watch student films. It's educational.

Monday night, having spent all of Sunday night and Monday before 2.30pm finishing the movie, I decided to finish my grant writing portfolio and reflection that was due the next morning. I sadly had to miss Brett Kashmere's Sound and Image Workshop screening. I heard good things, and I'm sure I'll see some of them on Youtube sometime soon.

Tuesday night was the big day... but less stressful than I expected. Because I had finalized the video the day before, I didn't have to worry about anything except if the people I had invited would show up. Most of them did, but some decided on Aries' senior recital instead (truthfully, I really wanted to go, too, but I almost missed my own film screening last year because of a senior recital).

Personally, I love film screenings. It's like a movie premiere when you're still in college. I used to get all spiffed up for it, but I've become a bit tired as the semester wears on, so I went in jeans this time. Oh well. Remember this story when I win an Oscar later.

On my left side, Cary Foster and Ben Jones, who commissioned the project. On my right side, Daniel, who starred in a section, and Chris, one of my classmates (and housemate for next year) and she helped me shoot the introduction. Further down the row were other members of our Advanced Media Production class, the creators of a space sci-fi thriller, a witty High-Fidelity-meets-college romantic comedy, and a poignant film noir about virtual reality and getting lost on the internet.

And now my movie, and my cinema class, are done. It was screened Tuesday night, sandwiched between a 17-minute raw and gritty story of male desolation and loneliness called Smashcan (I can give a more complete review after I turn in my final paper for my cinema class; I'm to write a review of this movie) and a 2-minute trailer for a modern take on the slasher film (it had the coolest credit sequence ever, playing with 3-dimensional type, which was intercut with classic handheld garishly lit camera work reminiscent of slasher films). 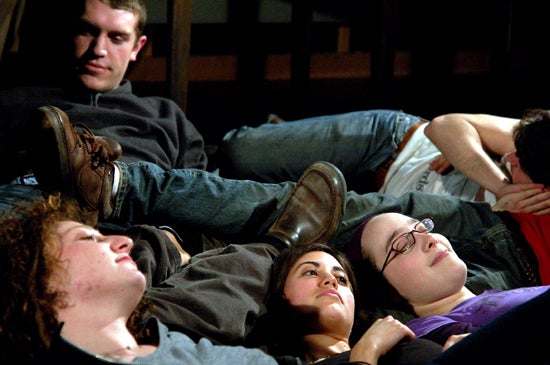 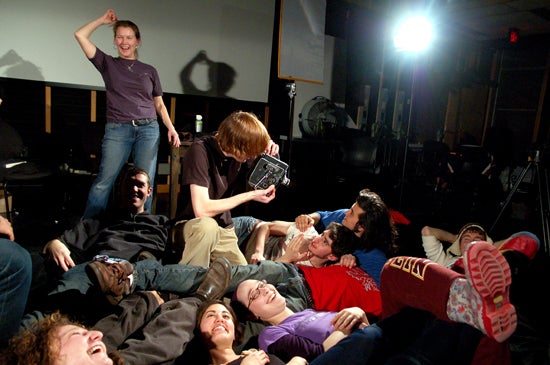 The moment you've all been waiting for: The Tall and Short of Oberlin, starring Aries and many other fine folks. The title is partially inspired by the hilarious height difference between the lovely Aries and myself. Don't believe me? Here's a teaser for the video... 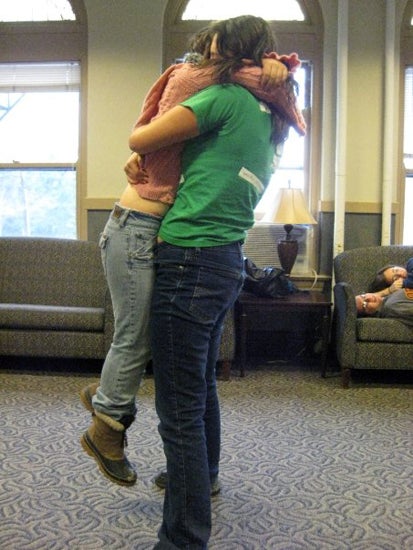 But watch the movie and there is even more adorable. I promise.

(Hey guys, comments are always appreciated, both on the blog and on the video!)

Hooray! I got a mention!

Also, I love that picture where Micha has the Bolex and I'm in the bottom making a heart. That was his profile picture for the longest time (still is, I think).

Our house is going to be fantastic next year. You'll take over the kitchen to make stop-motion soup, and I'll... well, I'm not sure yet whether I'll use our house for location shots... I have to write my script first, I guess.

I love you! I forwarded the movie to most of the cool admissions folks here and they like it. Especially the beginning. I have plans for more....

So cute! I loved it guys. Thanks for your hard work. I want to go to Oberlin...again. :)

The movie is awesome, of course. I giggled at the visit to Mieko and Sanjana's room. Yay, neighbors!

the video is WONDERFUL. (:

Yay! We spent so much time on this... Especially Ma'ayan. She did the hard parts. I just emailed people and talked about stuff.

(Ma'ayan is the best of all people combined.)