One of the biggest things on my American College bucket list: Spend time in New York City.

I was luckily invited by my friend's family in New Jersey to spend Christmas with them, as I was not going to be able to go home for winter break to see my family. I greatly appreciate their hospitality and I greatly enjoyed my time with them. I went into New York twice, and I really enjoyed both trips in! 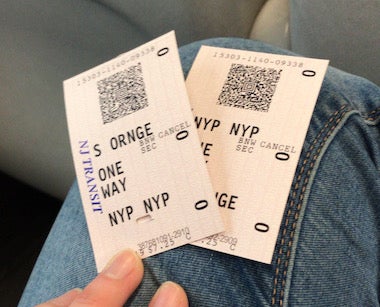 Both of my journeys into the 'Big Apple' began with me getting onto a New Jersey Transit train from the station in her town. The train went through Jersey into Penn Station, New York. I really enjoyed the train ride, it was really nice to get to see the Jersey countryside. Trains in Australia are also a lot more like New York subway trains (although not really) than the Jersey Transit trains. I've never been on a train where they collect your ticket on the train, so that was an interesting experience as well!

Once I got to Penn station on the first day, I'll be honest, I kinda freaked out. The friend I was staying with had warned me that New York was dangerous. I was told not to look too much like a tourist and I would be fine. But that's what I was, a tourist. I struggled to figure out which subway train I needed to get on to get to Times Square, but once I did, that is where I headed.

Times Square was not really as impressive as I expected. That may have been because I was so nervous to stop and look around, and the fact that the city was starting to get ready for the ball drop. I did enjoy getting to see one of the most famous street corners in the world though!

I got a text from a friend back in Australia who happened to be in New York at the same time as me. I met her and her family for a little bit to say hello. It was so weird to hear an Australian accent once I had adjusted to hearing American accents all the time. I really enjoyed catching up with my friend, but soon her family had to leave to move hotels, and I continued my trip. We ended our walk at the New York Public Library, and once her family left I decided I wanted to explore inside a little. It is such a beautiful place and I am very glad I got to explore inside that historic institution. Everything inside is so grand and amazing to look at, its really an awe-inspiring place. 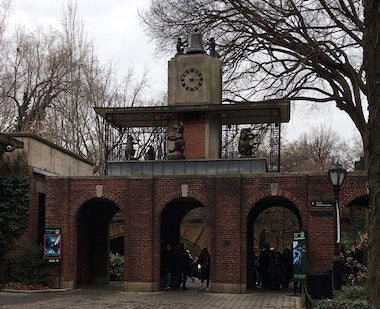 I decided the next place I wanted to go to was Central Park. I walked the few blocks from the New York Public Library to the south side of Central Park. I started at the Central Park Zoo. I picked up a hot dog from the food store (I was a little scared of getting food from a street vendor, I have a friend who told me they got food poisoning from one) and I walked through the main walkway, which reminded me very much of Madagascar (the movie not the place), as the movie is set in the very same zoo. If I had more time I would have paid to go inside and wander around, but I wanted to see more of Central Park itself.

I felt that if I wanted to do Central Park properly, I had to walk all the way up to the top, as it didn't look like an incredibly long walk on Google Maps (a naive thought, I now know) so I began my walk hoping I would make it before sunset. It was really nice to get to walk around the lake and see the ice skating rink at the top. I also really liked the Bethesda fountain and walking through the main walkway of Central park (you know the one you see in the movies). My photos of those parts of Central Park weren't great, so here is a photo of the main lake in Central Park, which I walked halfway around while trying to get to the subway station on the north end.

I made it to the subway station just before the sun began to set, and I got back to Penn station without a hitch. I got back on my New Jersey Transit train and headed back to South Orange. I really enjoyed my day and I was really excited to take another trip back into the city.

A couple of days later, on New Year's Eve, I decided to journey back into New York City to explore further. I hopped on another NJ Transit train, and once I reached Penn station I found my way to the correct subway station and headed down to the 9/11 memorial. The memorial was such a surreal experience. Being in a place of such importance for the world and society in general is a feeling that really doesn't have words to explain. I wandered around the memorial for a while, taking in the emotions of such a historic location. Once I was done, I continued on to my next stop, the Statue of Liberty.

I continued my journey by walking up to Wall Street. I honestly don't know what I was expecting from Wall Street, but it really was just a bunch of buildings. I saw the entrance to the New York Stock Exchange, which again, really was just a door, but I suppose it is one of the most powerful doors in America.

I then caught the subway back to Penn and headed to the Empire State Building. I decided I wanted to walk around Madison Square Gardens on my way. Fun Fact: there is no garden at Madison Square Gardens. That's kind of an important piece of information. So I went to Madison Square, and wandered around, trying to find this mystical 'gardens', before asking a security guard where the gardens were, to have him laugh in my face and tell me there weren't any. Honestly, with a name like that, I expected he would have gotten that question more often, but anyways, such is life.

I then wandered down the busy street to the Empire State Building, with the intention of being able to travel up to the top. However, once I got closer I saw the large New Year's Eve crowd and decided that I did not have the patience nor the time to wait for that line. It went the complete length of a city block and started to turn the corner of the block, so I thought it best to leave that one be and continue on my journey. It would have been fun to get to see the city from high up, but alas, a journey for another time.

I continued my walk through the city and decided I wanted to head to Grand Central Station, so I walked the 15-minute walk to Grand Central and wandered around one of the most famous train stations in the world. That place was so busy that it was a little overwhelming, but then again that's kinda New York everywhere. I wandered around the food court downstairs and wandered through the food market as well. I discovered there are also stores inside the station, which is not something I was expecting.

I then travelled to see the Chrysler building, which was just down the street. I couldn't work out if there was a way to get up to the top of the building, and the doormen in the lobby scared me so I didn't ask them, so that trip didn't last long but it was a very pretty building. I also discovered that the Australian Embassy was directly across the street, so I tried to get upstairs to be 'on' Australian soil again, but they wouldn't let me up without an appointment.

I decided to then venture to the United Nations building, to have a look around there. It was a really cool place with all the flags of the world outside. I tried to go inside for a tour, but you had to have a state-issued ID, and I was not carrying my passport, only my student ID, so I couldn't go inside. It was nice to get to walk along all the flags though and try to find the countries that are important to me.

I then decided that I wanted to go and see broadway. I managed to find my way to broadway but because of the ball drop, most of the streets around there had been closed off, so I was unable to go far from the subway station and essentially ended up getting back on the subway without seeing much.

I really enjoyed my trip to New York and I loved getting to see as many of the sights of the city as I could. I hope I can visit again one day, maybe with a friend so that I can have someone to enjoy it with. I definitely think that travelling with a friend is way more fun than travelling alone. I would love to spend a few days in New York, getting to explore downtown at night and really get to absorb everything the city has to offer.