I recently heard the news that Fairchild Co-op is permanently closing down. The contract between OSCA and Oberlin College was renegotiated, and one of the things that the College would not budge on was getting rid of my co-op. Naturally, I feel a lot of emotions about this. I’m angry that the College thinks my co-op is expendable. I’m disappointed that all it took to end Fairkid’s 43-year history was the success of a sushi dining hall that was only open for two months, and was undoubtedly more popular than it will be in the future because OSCA isn’t operating this year, and all students are forced to have a meal plan. I mostly feel sad, because my last semester in Fairkid was cut short due to the pandemic, and now I never get to return there again. Lots of emotions. But instead of ranting about the College, I want to take this blog post to celebrate the time I had in Fairkid, and remember what a good experience it was.

I first joined Fairkid in October of my sophomore year after the college made changes to the meal plans that I didn’t like. I didn’t join for the sense of community, or because I had dietary restrictions, which are common motivations that lead people to join OSCA. I joined for the very simple reason that things changed and I thought OSCA would suit me better than Campus Dining; I got on the waitlist for several co-ops, and got an email soon after saying there was a space for me in Fairkid.

My first semester in Fairkid, I laid low. I didn’t know many people, and didn’t really go out of my way to try and meet anyone. I learned the ropes of how discussions worked, food safety procedures, and how to maneuver everything in the kitchen. At the end of my first semester, I was elected Food Safety Coordinator (FSC). It’s not the most coveted position, I suppose, but every co-op has two FSCs, and I thought I would try contributing to Fairkid in a new way than when I started. Being an FSC involves training all of the members of the co-op in food and kitchen safety, doing walkthroughs of cook and crew shifts to make sure people are adhering to the rules, and sending emails about our weekly inspections and other things we notice on walkthroughs. It’s a really important job, but it’s a largely thankless position. A co-op is 70+ 18-23-year-olds having fun making food for each other, and a lot of them don’t particularly care about the health guidelines set by the state of Ohio that OSCA follows.

In spite of the rough moments, I loved being an FSC. There’s a certain satisfaction that comes from seeing everything go right, and that’s what made being an FSC one of my favorite jobs I ever had in the co-op. I liked walking through the empty co-op before meal times to see that all of the fridge temperature logs were up to date, we had enough soap and gloves in the supply closet, and there were no expired items in the fridges. I also loved leading crew trainings at the start of every semester; I remember being confused about everything in the kitchen when I first entered the co-op, and it was nice to be able to alleviate some of those worries for newcomers when I was an FSC. It’s something special to watch new co-opers go from not knowing what fluid goes in which pot sink to volunteering to sub as the head of a crew.

Fall and spring of my junior year was the start of a new golden age in Fairchild. We got a lot of new members who were really enthusiastic about contributing, all of our positions were filled by people who took their jobs seriously and did them well, and, perhaps most importantly, there was really good food. It was my second year in Fairkid, and I was an experienced co-oper; I felt more comfortable participating in discussions and subbing on shifts where I didn’t know people. After completing my two semesters as FSC, I got to try my hand at being a granola maker and a KitchCo, which meant I made sure our co-op was always supplied with non-foods materials and all of our kitchen appliances were operating correctly. On a more personal note, a lot of my friends from the Conservatory joined the co-op that fall, and it was nice to spend time with them at meals. My reliable table was me, several other lady brass players, a couple string players, and one organist. Some of them were people I knew before the co-op, but others were people I got to know better from having a meal with them twice a day. That year was a good year for Fairkid, and it’s devastating that it was the last.

Fairkid is a special place; it’s been one of the most constant things in my life at Oberlin ever since joining, and I’m really sad that it’s gone. Fairkid was my happiest place, and the home of some of my best moments in college so far. Pictured below is me at supercommando on my last day as an FSC. Supercommando is where we clean the co-op space really thoroughly before locking it up for break, and in this picture I’m trying to retrieve a pot lid that fell behind the sink with a pair of tongs. It’s silly things like this that made me happy, and it’s one of the things I’ll miss the most. 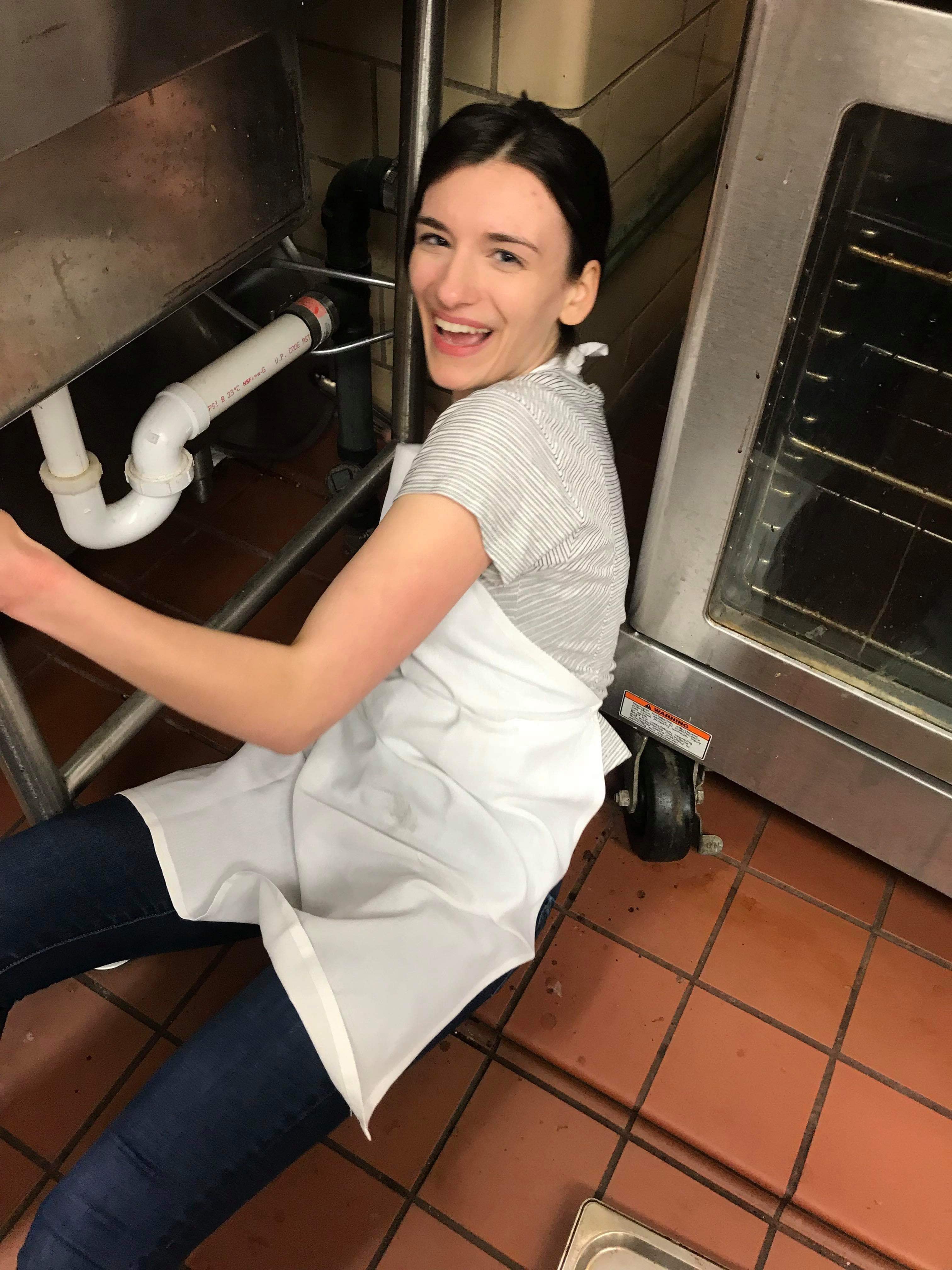 P.S. Oberlin College, our fry cutter is new as of last year and I spent a lot of time as KitchCo making sure it was working and none of the pieces got lost. You took my co-op away, please give the fry cutter back.