My mood at the beginning of this evening was on the 'bad' to 'toilet bowl' side of the spectrum. While cleaning up after the high school track meet on the indoor track (one of the glamorous perks of being an athlete), I hurt my knee pulling a cart loaded with track detritus. My non-union labor was rewarded further when I went to leave and found that my black wool coat had been taken from its spot by the door where I had left it. Where the coat had been only my red hat, which had been in the pocket of the coat, remained. Great. I spent the next half hour looking for the coat, finally gave up and walked home in a stocking cap and a T-shirt. Grand.

Once home, I spent some time moping about. I called my girlfriend to complain about what had happened, then got more mopey because she hadn't made me feel immediately better (her fault, of course; she was in the bathroom when I called. I did not have all of her attention). I started to get a tummyache, which was well-deserved, since I ate long-leftover Olive Garden pasta for lunch. It had been sitting in our fridge for about a week, and I really should have known better. Wonderful.

I figured getting out of the house would do me some good. I headed to Good Ole Stevie. If being around people didn't get me out of my funk, at least I could complain. It was dark out, but as soon as I left the house I saw that the skies had completely cleared. The sky was dark; velvety and close-looking. There were hundreds of bright pinprick stars, but hovering around the crescent moon were two of the brightest spots (Jupiter and Venus, as it turns out). These three, making the corners of a sharp triangle, were striking. I kept looking to them as I walked to dinner, and saw many other people doing the same. 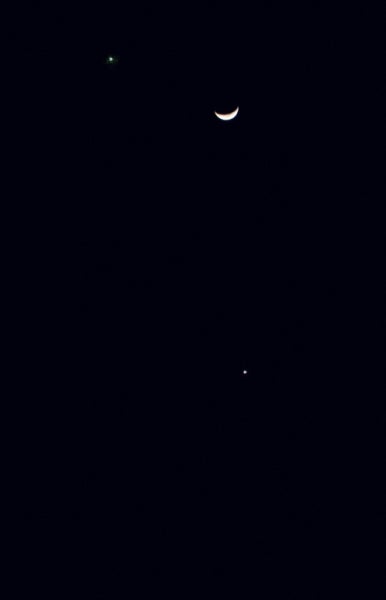 I got to dinner right as my friend Matt was leaving, and ate alone for a few minutes. Being out of the house and seeing the pretty sky had done me some good, and I was feeling better by the time Kristina and Hannah, two teammates of mine, came to my table with their food. My girlfriend called to see if I was doing better, and I forgave her for her bodily functions. After some good conversation, I left Stevie to do work in the Science Library, and was faced again by the moon and its two companions. This time, a group of about twenty Obies were stopped on the sidewalk in front of Stevie to look at the light show.

It was pretty cool to see people who would normally be trying to get from one heated building to another as quickly as possible stopping to stare at the points of light in the abnormally clear, blue-black sky. All those people had their own unique set of problems, some I assume much worse than mine, but everybody had time to forget whatever was stressing them out and appreciate a cosmic coincidence that happened on one of the rare cloudless nights in Oberlin. Not miraculous, but pretty cool.

You've no doubt read a piece like this before that talks about putting things in perspective, about how all of us are really connected if we take the time to realize it, how we could really change how things get done around here if we all just kept that in mind a little more often. That's probably bullshit, though. It's hard to keep it in mind. It's the kind of thing you realize in seconds-long flashes. Certainly if everyone in the world could keep the same mindset you get when watching a meteor shower there would be less ugliness in the world, but it can't last. The things that distract you in life are important, have a real impact on you. In the pocket of the coat I lost was a scarf that I had had for a decade. My mom bought a scarf for both me and my sister for Christmas when I was half as old as I am now, a blue one for me and a red one for her. They were from Mexico, and in the last few years I've really taken to wearing mine in Oberlin winters. That scarf was important to me; not having it is going to bum me out whenever I think about it. The best I can do now that I'm not outside, looking at the moon and planets in the sky, is bask in some kind of afterglow for maybe an hour or two. Maybe I can recall it when I'm thinking about the a-hole who took my coat and get a little peace from it.

I remember the moon that night. It was beautiful. I almost crashed my bike because I was looking up most of my ride home that evening.

I lost my favorite scarf, which used to be my grandfather's scarf, sometime last year. It still breaks my heart every time I think about it not being in my presence anymore, but hopefully our scarves are hanging out together in some land with fabric softener and no moths.

I forgive you for your bodily functions, too.

Dang it, dude! Has anyone returned that scarf yet? This is bothering me.

Also, thanks for the warning about the Olive Garden. I was actually about to eat some, and I guess it's been in there two weeks now...

Jacob-
I got a hot tip from a head coach about an assistant coach named Alyssa or something who put a coat in the closet after the meet last week. The pasta's gone, but there will be some amazing homemade ravioli waiting for you tomorrow night.

Was the coach's tip legit?