I took "Intro to Musics of the World" on a whim last term with visiting professor Katherine Meizel and realized that I have a true love and it is ethnomusicology, so obviously I had no choice but to take "Music and Politics of Identity" this term. It's mad fun. We sit in a circle and discuss how different components of identity are linked to music, and how music is related to politics, and how basically everything is related to everything in this one big confusing anthropological web. Whee!

One of our readings early on1 discussed the use of ringtones to assert membership in a certain subculture, specifically the ringtone version of rapper 50 Cent's "Candy Shop" as a part of ghetto fabulousness. And I quote: "The floating subculture of which this ringtone marks the cultural memory is that of gangsta rap, and by unpacking his mobile music library its carrier stages a cultural performance of what in a paraphrastic manner could be called 'floating fabulousness.'" I love that I am reading serious academic texts and they are coining serious academic phrases like "floating fabulousness."

This class also includes a final project on identity in American Idol2, which means I have to be intimately familiar with the parts of this season relevant to whatever facet of identity I choose (that'd be race and/or ethnicity). So yes, my homework has been to watch American Idol. I won't lie, I started the semester a hater and I still wouldn't watch it for entertainment value, but analyzing songs and song choices and judge comments has grown on me. For example, what does it say about one contestant if her idea of expressing her African-American heritage is breaking into African dance during one of her numbers on the show? What about if you contrast this with her peer, whose idea of expressing his African-American heritage is being backed up by a gospel choir in stereotypical robes? What does it say about us when we as a society don't make distinctions between those two ideas of what it means to be black? That's not even scratching the surface. 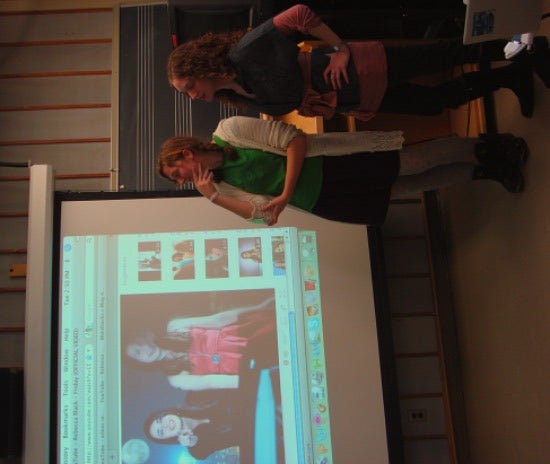 Professor Meizel and I are contemplating the "Friday" music video, which we had just discussed in class. If you are not familiar with Rebecca Black's single, that's completely okay. As serious art/entertainment, it ranks slightly below "Attack of the Killer Tomatoes."

Finally, there's "Environment and Society," a 101 class that is a requirement for the Environmental Studies major but not a prerequisite for many classes. Subsequently, the students are a nice blend of total newbie treehuggers (me) and crunchy, grassroots movers and shakers who just hadn't gotten around to taking the class yet. It makes for interesting discussions. Our professor, Camille Washington-Ottombre, has only been teaching since last semester so there are some rough spots in her lesson style that haven't been worn smooth by experience yet, but she more than makes up for it with a super perky enthusiasm for all things environmental studies and a Dan-Styer-esque determination to take our feedback to heart. (She also has this charming French accent that reminds me of my relatives every time I step in the classroom, so she gets +5 awesome points without even having to try!) 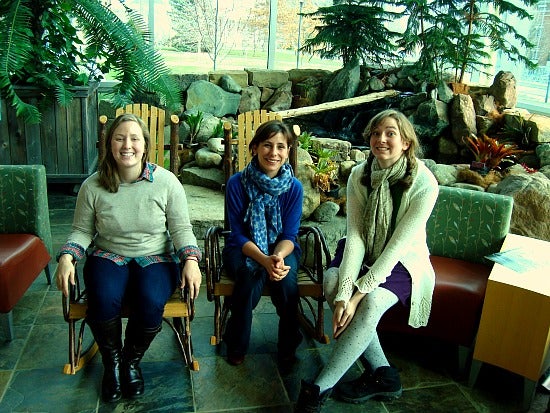 From left to right: Kelley Roberson (our lovely TA), Professor Washington-Ottombre, and me. They're both sitting in the rocking chairs in the Environmental Studies building's atrium. I'm grinning excitedly.

What really makes the class worth taking, though, is the mandatory community outreach project that spans the entire semester and forces you to put what you're learning into action. Three other girls from the class have teamed up with me to carry out what we've dubbed "Eden in Oberlin" - Professor Washington-Ottombre scribbled "Ambitious!" with a smiley face on our project proposal when we turned it in with that title. The goal is twofold, or possibly threefold, depending on how ambitious we really turn out to be: research how to build an organic garden on a small plot of land in Ohio that will not only look pretty but also feed you; implement what we find; possibly get involved with Earth Week and show the garden off to elementary school kids and the like to educate the Oberlin community. The four of us have split up the research into areas like what plants grow well in which seasons in this part of the country and animal-proofing/using animals in plant cultivation - chickens eat bugs and fertilize! - and soon, we will work with Marco Wilkinson3 to set up the ideal garden in his backyard.

The four of us meet at Marco's house once a week to get our hands dirty and go over plans for his property. He serves us tea and tries to keep his two cats locked away, and we listen to his garden-guru speeches and try not to kill his kale when we plant it in little boxes. I think I'm the only person in the group who has ever done so much as pull weeds before (thanks, Mom). Once the snow stops surprise-bombing us4, we'll prep his yard, probably do some digging and landscaping, and then make green things grow! A large part of my spring break so far has actually been spent catching up on research so that I'll be prepared when my (theoretical) knowledge of intensive gardening techniques is put to the test.

My twenty-odd classmates are working on similarly neat projects in the community. One group has been wrestling with the more bureaucratic side of things, working with the Office of Environmental Sustainability, Student Senate, and the Department of Finance and Facilities & Operations to better our Green Purchasing Policy. It was crafted to put purchasing guidelines in place that take into account things like potential for reuse and recycling, maintenance needs, and even manufacturing and packaging of products Oberlin buys - we are, after all, "committed to the use and purchase of environmentally and socially responsible materials and products." Unfortunately, the policy isn't implemented terribly well, so the group tackling this behemoth of a project is aiming to change that by doing things like taking inventory of what we're buying right now and proposing more sustainable options.

Other projects include research into the feasibility and efficiency of using cattails (which grow in wetlands near Oberlin) as an alternative food and fuel source. I hear they're planning to harvest some cattails themselves later in the term to get a sense of how devilishly difficult it really is to get them out of the ground. There's also a group reaching out to the Oberlin Early Childhood Center to restore a greenhouse on their property and develop guidelines for little kids to actually be able to grow things themselves, which I think sounds like a really worthwhile endeavor. I'm all for giving tykes the opportunity to get outside and get dirty, and if they learn about stewardship of living things in the process, so much the better! Anything but a childhood in front of a screen, really.

Thus closes my summary of a first-year, second-semester schedule! It includes a nice spread of subjects, interesting work, and some seriously rockin' professors - in other words, it's completely typical of Oberlin.

2. I'm fairly certain the reason we've been assigned this project is that our professor would marry this show if she could - she literally wrote the book on it. It's called Idolized: Music, Media, and Identity in American Idol. She's going to be thrilled to pieces when she finds out that I'm actually taking an interest in it.

3. Marco Wilkinson managed the George Jones Farm recently, so he knows what's up with making sure plant matter is healthy. George Jones is a super nifty organic farm down the road from Oberlin where students often work, I'm told. Oberlin also buys a lot of tasty food things from George Jones, which makes me very happy because I care about eating locally.

4. As I write this, it is the end of spring break and mid-forties outside. Not two days ago, the sky spent all afternoon dumping the heaviest snowfall I have seen this year on us. Maybe I am just a naïve first-year, but I did not see that coming.

What an honor to make your blog, Ida! Keep up the excellent work!

oops! Didn't mean to be "anonymous" in the above comment!

You have only yourself to blame/thank! Keep up the excellent teaching!

Oh my god. Friday. We so excited? About your blog post?

You are so well-rounded! Such an exploratory Oberlin student :D

Of course the "Friday" video is just below "Attack of the Killer Tomatoes". _Everything_ is just below AotKT. The music of that film is a flawless example of the semiotic impact of music often interpreted as so frothy as to be epicultural, namely, the teenybopper angst ballad. But look what it did to them 'maters!

Ma'ayan: Yep, that's me. So indecisive about what I want to study that I end up 'well-rounded!'

Dad: I'm actually pretty certain "Friday" would have much the same effect on killer tomatoes. Possibly even on every sentient being within earshot.