If you read my post on how I am the Queen of Registering for Classes, then you know that I only see my professors on Tuesdays and Thursdays. Yes, I have four-day weekends. Yes, I don't actually get dressed until lunch most days. Yes, the two days when I do have class are killer.

No but seriously, the only reason I'm able to survive having class from 10:00 to 4:15 (with a break for lunch) and actually contribute coherently in discussions is the material. It is so fascinating that I pay attention like a raptor. I was going to say "pay attention like a hawk," but raptors are more intense, so we're going with that. Without a doubt, my professors deserve all of the credit for making me fall in love with my classes this hardcore. Take, for example, "Einstein and Relativity," a one-module, one-credit Natural Sciences course for kids who don't particularly have an interest in Natural Sciences. It sounds like it would be super easy and probably super lame, but it is in fact the most brilliantly taught science course I have ever taken, and I had four semesters of practical physics with two different teachers in high school. I am well versed in poorly taught physics.

The thing is, Dan Styer loves to teach. It's a big class, held in a big lecture hall, and he does crazy things like require every single one of his gazillion students to write a pertinent question on a slip of paper and hand it in at the end of every single class. And then he reads every single question and answers the best ones either personally via email or publicly the next time we have class. I've had several long chains of emails spawn from a particularly interesting question I posed over the last two months, and I can tell you that I have never seen someone get so genuinely excited over an astute question as Dan Styer. He reminds me of John Nash1 in A Beautiful Mind, except less of the legit mental insanity - although he is notorious for producing some quality quotes2. 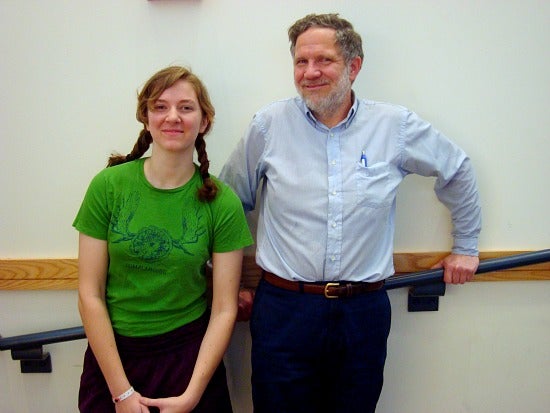 Dan Styer is the one on the right.

The other astoundingly good thing about his course is the textbook. It's called Relativity for the Questioning Mind and I'm sending it home for my mom to read because that's how clearly he explains special and general relativity. He makes it fascinating. It honestly reads almost like a novel, except for a few logic problems at the end of every chapter for you to test your comprehension (for my final, I wrote a song that worked out one such problem in its lyrics). Next module, I will be taking "The Strange World of Quantum Mechanics" and I have heard that the textbook for that class is just as excellent. Judging by my surprisingly solid grasp of relativity (which I can promise you involves a significant amount of mind-bending thought processes), that's no small feat, so I'm looking forward to it.

I was talking to my godmother recently about courses like this one, and she said that she'd found professors tended to adopt one of two mindsets about them: either the one that goes "they'll never take another class in this field again, why bother," or the one that goes "they might never take another class in this field, so what do I need to make sure they know that is essential to this subject?" I'd like to add a third, namely the one Dan Styer uses: "I might never get another chance to teach an individual who thinks so uniquely about my field; what can I learn from this individual and how can I get them to pose questions that will challenge my understanding?"

My other three professors are similarly engaged and engaging; Steve Huff (who teaches my German literature course and also happens to be my advisor) somehow manages to keep even his rambling tangents relevant and entertaining. It's magic. I was so incensed by one lesson that I rant-posted on a personal 365 project blog of mine about how this one jerk, Gottsched, ruined German theater for a while. In retrospect, I am a nerd. But this is okay! It just means I love what I do. 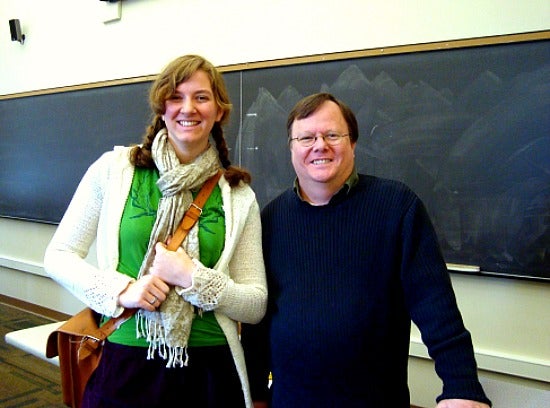 Me! Steve Huff! A blackboard! Yes!

"What I do" in German 311 is mostly reading great literature in its original language, so I suppose it's not surprising that I love it. That said, I've had some great literature torn apart into tiny bloody shreds of boredom by teachers before, so I think it's telling that this class can make me slog my way through centuries-old works with centuries-old words and come out the other end convinced that it's relevant to me here and now. It helps that the dramas we've read have dealt with matters easily relevant across centuries and continents; love, honor, class divisions, pranking people, bureaucracy, war, etc. The extremely well-developed characters also make it easier to relate the story. (To any German fanatics out there: Lessing was so far ahead of his time that his Minna von Barnhelm has one of the strongest female characters I think I've ever read, and it was written in the 1760s. Worth the read.)

I've come to really appreciate Oberlin's policy of reading whole works and not just excerpts. I hadn't even thought about the matter until my professor apologized that we wouldn't be able to read more than just a few pieces this term, but I realized I would much prefer getting to study a drama in its entirety - including the context it was written in - than just looking at a snippet of it. Apparently, most colleges want their literature courses to offer a broad view of whatever subject they're focusing on, but I'd rather study deeper and narrower in my courses than shallower and wider. As a liberal arts student, I'm not afraid that I won't get enough breadth in my education.

Finally, to round off this post: shoutout to Steve Huff's brand new baby Lydia! The day he brought pictures to class was real cute. Stay tuned for the next installment of super amazing professors and the super amazing classes they lead!

1. The Nash equilibria were discovered by John Nash, and he was awarded the 1994 Nobel Memorial Prize in Economic Sciences for his work in game theory. Of course, he holds numerous honorary degrees and is a prolific guest speaker (he ain't dead yet!). He was also diagnosed with paranoid schizophrenia.

2. From his Oberwiki: "I have a magical cure for all diseases. It's hot sulfuric acid!" Zoë has also written a post with some lovely quotes of his.

I took a chemistry class for non-science majors class my freshmen year entitled Chemistry and Crime, and I found that Professor Thompson also falls under the third mindset. I had taken two chemistry classes in high school, but never with practical application (like forensic science) to get the concepts into my mind. It sounds like he and Dan Styer must have secret meetings to make sure that everyone in their classes learn something good in an interesting way.

Also, ADORABLE that you managed to get photos with your professors! My parents used to wander the halls of my schools on graduation with a camera to get shots of me with my instructors. It makes for wonderful memories :)

Hmm... I swore off chemistry after high school, but who knows? I thought I'd also sworn off physics.

I'm thinking of making the pictures a habit. They were actually a lot of fun to do.