A few weeks ago I met up with Sophie, a member of the class of 2018 and fellow graduate of Niskayuna High School. I had a really nice time chatting about a shared favorite teacher from our high school, her areas of interest at Oberlin, and what I've chosen to do with my three years here. I tried to answer her questions honestly and interestingly but at one point, she asked me what my orientation was like and I'm pretty sure I gave an awful answer, something along the lines of "it was a blur." I think I answered her question so non-informatively because until that moment I hadn't really thought about my orientation since it ended three years ago. But because the class of 2018's orientation is only a few days away and I'm about to begin my last year at Oberlin I've decided to try remember what orientation week was really like.

The first thing I remember about orientation is the excitement that came from constantly introducing myself to other people, telling them about my passions and interests and hearing about theirs in turn. Everyone seemed to have such big plans about what they wanted to do and who they wanted to become. It was pretty invigorating. On the other hand I had the following interaction an astounding number of times:

Person from Westchester/New York City/Connecticut: Where are you from?
Me: Upstate New York.
Same Person: Oh, my parents have a house on Lake George!
Me: ........

Normally that sort of thing would've driven me insane but everything around me was so new and fresh that I don't remember being annoyed at the time.

I remember going to every mandatory orientation event since I've never been the type to skip out on things. I don't remember most of them, but I do remember that Finney Chapel gets very hot and uncomfortable when it's filled to the brim with first-years. 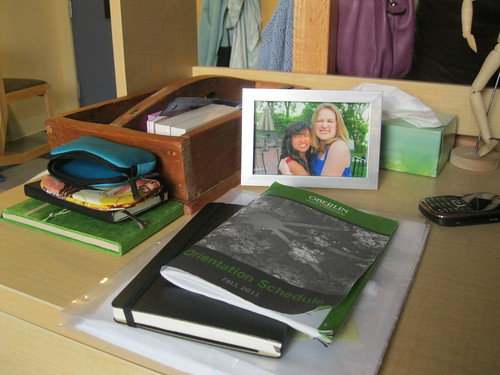 Apparently I felt the need to document my orientation schedule. Only my first-year self can say why.

I remember my hall beginning to turn into a community. On my first night in Oberlin my floor played a name game in which we each chose an adjective that began with the same letter of our first name, leading to new, temporary nicknames: Gracious Greg, Nimble Nat, Rad Ronni, and the two Julias, Jubilant and Cute. A few days later someone painted a weird statue of a pig brown and named it "Kahnfucius" and we all made up lists of Kahn-related puns. We referred to orientation as "Camp Oberlin," which, in retrospect, was a pretty accurate way to describe that week. 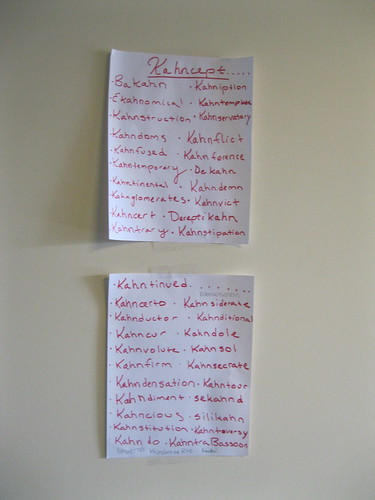 I remember meeting my roommate and eating a very quiet meal with her and her parents at Tooo Chinoise. She was quiet and kept to herself so I spent a decent amount of time by myself, mostly decorating my new room and exploring my new campus. 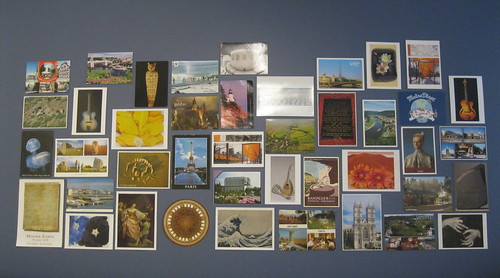 The first of many postcard collages to grace my various rooms - ah, the memories!

I remember the Day of Service, but not the parts of it you might expect. For example, I've forgotten the name and aims of the project I was helping with. I just remember digging in a garden somewhere on south campus and listening to two guys talking about lucid dreaming. Well, that and getting to know the person who is now my best friend at Oberlin.

So go forth, new Obies! Introduce yourself 824 times and listen so intently to the other person that you lose track of where you're walking. Go to the events you need to go to but make sure to break free from the first-year pack and do some exploring on your own or with a new friend. Make memories, and don't fret when they start to blur together because no matter what you first think, chances are you'll be able to remember what was important.

Oh, and is is still ok for me to call you guys Obies? Please advise.