Some people come to college knowing exactly what they want to major in. I was not one of those people.

When I started at Oberlin, I was confident that I had no idea what I wanted to study, and so I decided to try all kinds of new things. My plans have changed several times so far, but my experiences ultimately led me to declare a major in English.

When I arrived at Oberlin, I was considering majoring in French. French was always my favorite class in high school, and I thought I could see myself as a translator or an interpreter. I took a French class during my first semester, but I didn’t just love it like I did in high school. I realized that I was more interested in language learning in general than I was in French specifically, and so I decided to move on from the idea of majoring in French.

I also took my first psychology course that semester, which I loved. The class was incredibly interesting, and I decided it was a topic that I wanted to pursue further, so I made a tentative plan to major in psychology. My second semester I took two more psych courses, Research Methods and Clinical and Counseling Psychology. Through those classes, I realized that the major would be more STEM-y than I wanted, and I found that I couldn’t really picture myself having a career in psychology.

During my second semester, I also took my first college English course: Arthurian Fictions, with Jennifer Bryan. I sat in on the class during Add/Drop on a whim and decided to take it because I was so impressed by the professor and so (surprisingly) interested in the material. That course was very personally fulfilling, and I found myself wanting to take more English courses. Later that semester, I went to an interest meeting for the Oberlin-in-London program where you could take classes in English or politics. I had wanted to study abroad in London ever since traveling there in high school, and this program looked incredible. Since I had only taken one English class at this point, I was a little unsure if I should commit to a whole semester of English. But the courses looked so exciting, I decided to apply—and I got in.

The first semester of my sophomore year, I took two literature classes to be prepared for my spring semester abroad. One was British and Irish Modernism with David Walker—the professor who would be teaching in London—and the other was a Russian Lit class. While I have always loved reading, through those courses I discovered how much I enjoyed discussing novels and stories. I learned so much from my classmates and my professors in every conversation we had.

I was also surprised by how interdisciplinary the courses were. My interests in psychology and language were fulfilled, as we discussed the human psyche and literary form. We read about social and political issues and learned about the historical setting of different texts. I realized that I would never get bored taking English classes because every course would be multifaceted and unique.

When I had to declare my major before I left to study away, I decided to go with my gut and pick English. A few years ago, I never would have predicted that, but so far, I have found the major to be an excellent fit for both my academic goals and my personal interests.

So, here’s my advice to those of you who are feeling intimidated by the idea of choosing a major:

1. Take a variety of classes, and don’t put all your eggs in one basket.
In my first year, I took courses in French, psychology, computer science, anthropology, and English. When I decided against majoring in French and psych, I felt comfortable changing my plans because I knew that I had other options. This also meant that I fulfilled Oberlin’s course requirements with no problems.

2. Try new things and take risks.
I would never have thought I would be interested in a class about Arthurian Fiction, but I decided to sit in on a lecture because a friend recommended the professor. If I hadn’t done that, I wouldn’t have taken the course, and I wouldn’t have rediscovered my love of English. So surprise yourself, and step out of your comfort zone!

3. Don’t stress yourself out!
I’ve come to the conclusion that your major doesn’t actually matter as much as you think it might. Take classes that you are genuinely interested in and just see what happens! Also, if you choose a major and later realize it actually isn’t for you, it’s totally possible to change it. So you shouldn’t feel like it’s absolutely set in stone.

And even though I declared my English major, I’m still figuring things out! Next semester I’m taking Developmental Psychology and Language Pedagogy, and if I like those, I may look into an Education concentration. I’m also considering a minor in book studies since I’m thinking about going into library science.

I’m excited to try new things, gain new skills, and take advantage of the opportunities that Oberlin has to offer. 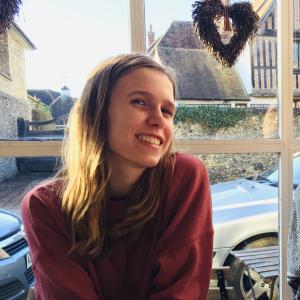