Yesterday was the Lunar New Year Banquet that I may have mentioned a couple times before. I also may have mentioned that this year CSA collaborated with the Oberlin Korean Students Association and the Vietnamese Students Association to hold the event. This meant more people helping out, more (varied) performances, and more (awesome) food. Overall, it was an awesome evening, though it all passed in something of a blur, at least for me.

As usual, the day began with everyone decorating the Root Room in Carnegie. I actually spent most of my time bringing over decorations from our room in Wilder and then bringing over a projector from A/V, located in Mudd. I did have time, though, to stuff paper bags with candy to give out to the children from the Westlake Chinese Cultural Association who were coming to perform. 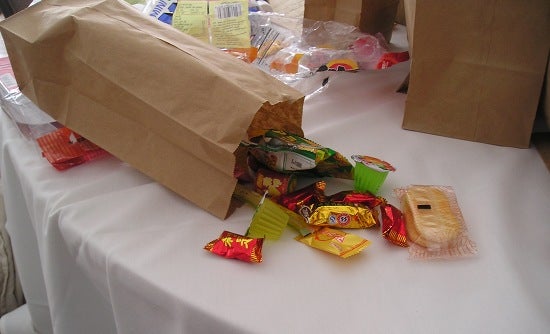 I also put little candies on plates for each of the tables. I'm not sure how much the people who came liked the candies, but they certainly looked pretty with the clementines.

Once everything was set up, we rehearsed for the Lion Dance. I was Buddha this time around, with a new mask (that I unfortunately don't have a photo of). This mask, though, was a lot less scary than any mask that came before. Besides the people in the lions and me, there were also three people playing percussion, including our very own Sophia on the drum. 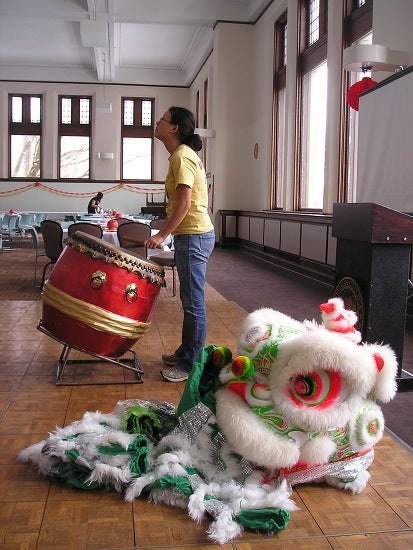 Excitingly enough, this year we purchased a second lion, so this year we were able to do really cool things like have the lions jump over one another. Plus, if you have more lions, everything just looks cooler. Please enjoy these gratuitous photos of the lion dance because I am in love with our new lion.

Besides the lion dance, there was also a hilarious movie about some of the traditions associated with Chinese New Year along with several other performances:

I spent most of my time running around, serving food, and changing into and out of my Buddha costume, but what I saw of the performances was great. The Westlake kids, just like last year, were adorable both when they were dancing and when they weren't, the music sounded good, and the skit was hilarious. Therefore, I must say that my last New Year's banquet was a success. It certainly wasn't relaxing, but that's not what I would have wanted at all.