I promised a post about classes a little while back, and here it is (if slightly overdue, despite the fact that I did not have to weed my schedule over add/drop at all)! For unknown reasons, this semester has turned out to be remarkably poetry- and translation-centered, considering the owner of the schedule in question is a neuroscience major. To add to the irony, there is also no NSCI course in the mix. Instead, I am taking bio-organic chemistry (three textbooks stacked about a half-foot high), bio research lab (weekly games of opossum vs. human hide-and-seek), statistics (after a crash course via intro neuro lab last semester, I am now going back and laying the foundations for fun times with MS Excel), introduction to comparative literature (evidently one version of Wild Ass's Skin translates Balzac's "caprice" as "freak", which engendered some interesting sentences), and translation workshop (otherwise known as basking in the cadences of languages I do not command).

Because my own poetry is graceless and grating to the ear - and because the latter half of the poetry/prose creative writing gateway terrified me - translation workshop is like a gift. Although I studied in Taiwan during high school, I have fallen out of practice with both Taiwanese and Mandarin, and now I have the chance to study the poetry of both languages for class. Moreover, in each workshop I get to hear classmates reciting poems in their respective original languages, and the fluency with which they speak is astounding, particularly considering that many are not native speakers. (One student speaks Latin like she was born and raised in the Vatican, as far as I can tell. Which is, incidentally, not very far at all, but it sounds very good.)

Maybe in another semester, someone will be admitted to the workshop who will work primarily in Quenya (Elvish of the Tolkien breed, for those who have not read The Lord of the Rings - yes, I know that sounds like travesty to some of you). If I have already graduated by then, I think I'll come back and visit just to attend that poetry reading.

The beauty of the semester is that translation workshop is not the only class in which I am being exposed to the theories behind translation, or to literature originally written in Mandarin, or to poetry (as I'm auditing One Hundred Poems). Translation theory is never far from the discussion table in Intro to Comparative Lit, especially in last Monday's class, when we had just finished reading (in English) Honore de Balzac's Wild Ass's Skin. I had never read Balzac before, although a translation of Le Pere Goriot into Mandarin (probably a secondary translation, from the English from the French) is sitting on my shelf at home, and the first chapter felt like being in those red shoes that compel one to dance until exhaustion or death. Hopefully I'm not making up that allusion, but I'm not sure where the title of the story has flitted off to in the recesses of my brain. In any case, I would read a short passage, run smack into a word like "chibouk*", look it up, go back to the text, have no idea who Julia and Tibellus were, look that up, and then go on. Perhaps this is the inevitable literary effort produced of writers who dose themselves on fifty to a hundred cups of coffee each day. 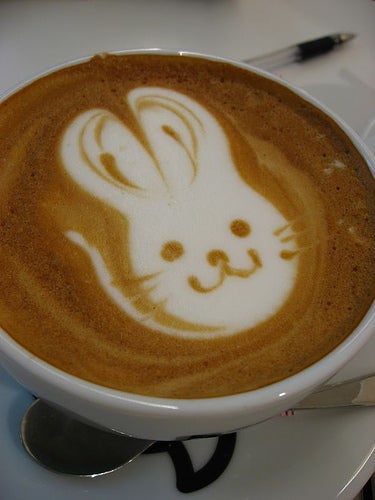 Balzac might have written happier stories had his coffees been thus adorned. that, or the dilution with milk might have kept him from caffeine overdose.

Also on the comparative literature syllabus is Eileen Chang's Love in a Fallen City, which I'm looking forward to since I've read a few of her stories in Mandarin before, and I'm curious to see how the translation renders those stories. Even without reading the original languages, I've noticed that there seems to be a trend among language families, wherein the more obscure roots in one language can be seen as common words in its cousin languages: for example, the English "escalade" shares traits with the French "escalier" (stairs, or so I am told), but only one of those is in everyday usage. I suppose there is "escalator", though. Similarly, certain words in Mandarin that have died out of common usage by now, but that can still be seen in the older poems, surface in the modern usages of Japanese kanji, unchanged. I doubt that this is historically true, but I like to think that with each linguistic molt, certain words have to stay behind in a discrete language, sloughed off but still viable, as though a back-up file for the latest language under production.

This leads to problems in translation. (See above; in context, Balzac's 1908 translator had rendered: "I only wanted to surprise you, to sleep beside you. Forgive me for my freak.") Recently, I found a translation of a Chinese poet whose author seemed to favor the services of Google Translate, and subsequently translated "gongs and drums" as "gold drums", and "fish and dragons" as "Dragon-Fish".

perhaps she was suffering withdrawal symptoms waiting for the next Pokemon game installment to come out?

For my part, I'm sure my translation efforts have their comic moments as well, though hopefully I will avoid an overabundance of them. So far, I love that I can work with a set framework of ideas, if not specific words, and play around with the words and phrasing in English. This circumvents the anxiety over finding fitting poetic content that would otherwise torment me, were I writing my own poems. Also, translation workshop has steeled my determination to learn Spanish one day, if only to actually understand Spanish language poems without the translation barrier - as skintight as a translator can fashion it, it's still like trying to taste-test food with a paraffin coat on your tongue.

*according to the dictionary widget, this is a long Turkish tobacco pipe.

This is fantastic! What department is this translation workshop in? And have you had anyone bring up "Shakespeare in the original Klingon" yet? ;)

Translation is CMPL/CRWR 350 (crosslisted). And I haven't, but you should go for it!

Golly gee, I had no idea this class existed. This is one of the most awesome hidden treasures in the course catalog... then again, most comparative lit classes elude(d) me and I hear about their wonders later.

Will there be readings of the poems later this semester? I'd love to hear some of them!

There was a reading at Slow Train last semester, so maybe!

Great blog! By the way, how do you feel about the "poetic license" by Witter Bynner on his translation of "The way of life according to Laotzu : an American version"?