In my previous post I called this time in my life "the in-between summer." I came up with that name off-hand, but the more I think about it, the more apt it seems. So much of this summer seems neither here nor there. It's not quite like the summers between semesters at Oberlin, but it's not different enough from them to belong entirely to my adult, post-grad life. I'm living in my childhood home, but I'm looking for an apartment in a foreign country. I'm still writing on this blog, but it's my last post. I'm in-between, and I find myself constantly looking forward and back.

What am I looking forward to? That much is obvious. Exactly a month from today I'm moving to Germany! After a short stay with friends in Munich and an orientation in Wermerlskirchen, I'll start working as a Fulbright English teaching assistant at the Gymnasium in Burgdorf, Germany. As an ETA, I'll be working in English classes for students ages 10-18, wielding the authority of a native speaker. I can hardly wait to get back to Germany and try my hand at teaching, especially through such a prestigious program.

Of course, there are a lot of challenges that come with that. For example, I have no idea where I'll be living next year. Right now I'm hoping to stay with a family with children at the Gymnasium, but I'm also looking at apartments in Burgdorf and in the nearby city of Hannover. One of the many lessons I've learned in the last year is how important having a backup plan is, so I'm basically trying to pursue every option available to me.

I've also applied to and been accepted at the Leibniz University of Hannover as a guest student. I'm not quite sure how taking classes will fit into my teaching schedule, I doubt I'll figure that out until I get to Burgdorf, but being a student in Germany again seemed like too good an opportunity to pass up - not only because I like taking classes, but because being a student entitles you to a statewide rail pass and a variety of perks and discounts that pretty much make up for the cost of attendance.

What am I looking back at? You'd think I'd be reminiscing about my four years at Oberlin, but mostly I've been thinking about the summer before I left for college. Like I told a friend from high school the other day, I can't help but compare that summer of transition to this one. Then I was moving away from home for the first time, heading west towards the big sky like I had always dreamed of doing as a kid. Now I'm going in the opposite direction, back east and over the sea, chasing a much newer dream. Then, as now, I was emerging from a period of sadness and uncertainty and feeling hopeful about the next step. I sensed that I was on the brink of something that would change my life in ways I couldn't yet understand. But while I looked to the experiences ahead with excitement, I wasn't at all sure that I was up to them.

Until my senior year of high school, I considered myself a confident person, but the college application process essentially tore my self-confidence to shreds. I had put so much of myself into my applications that each rejection felt intensely personal. And when I got into Oberlin off the waitlist, I accepted the offer thinking I was unworthy to do so, fearing that my classmates would be smarter and more talented than me. I was able to fake my old confidence pretty well, but deep down, these thoughts stayed with me throughout my first year and a half at Oberlin. It wasn't until my fourth semester, when I had declared my major, started singing with Collegium, began pursuing my interest in translation, and finished my study abroad applications, that my old, confident self came back in earnest.

If my 18-year-old self could see me now, I think she'd be surprised, but pleased. Back then I hoped I'd end up with a music degree and maybe an English major, but that's clearly not how things turned out. Sometimes I wonder how that version of me would be like and what her plans for next year would be, just like how I wonder about how I'd be different if I hadn't studied abroad or I'd done an internship during some winter term or if I hadn't gone to Oberlin at all. The question at the heart of all of these wonderings - if I had done one thing differently, changed my mind on one major decision, could I still have ended up here?

I'm reminded of a passage from Eva Hoffman's Lost In Translation, a book recommended to me by a fellow Oberlin blogger that I only got around to reading this summer. In it Hoffman reflects on a decision she might have had to make had her life transpired differently and decides that

"[n]o, one can't create a real out of a conditional history; in the light of the simple declarative statement of actual existence, "would have been" or "as if" loses its ontological status. In a way, it doesn't count, though without it, we would have no imagination: we would be truly prisoners of our selves. But the shadow that this conjectural history casts over my real one is not a shadow of regret, but of the knowledge - to which we must all reconcile ourselves - that one is only given one life, even though so many others might have been."

Like Hoffman, I can look at my life and my choices, even the ones that were arguably bad or ill-advised, without wishing I had chosen differently, or at least I try to. Most of the time I'm pretty successful, and I can look back at my "real history" with satisfaction, perhaps especially because the next chapter is so exciting. That's not to say I think my life was "meant to happen" this way, I don't really think that's how life works, I just think I'm lucky to have made decisions that led me to the life I've got.

Lately I've been thinking a lot about how lucky I am. I'm lucky to have had the opportunity to a good high school and a good college and to study abroad. Lucky to have family members who support me in every way possible. Lucky to have had teachers and professors and bosses who believe in me. Lucky to have friends who are there for me even when I'm bitchy or sad or constantly leaving them behind. Lucky to have had my post-grad Plan A work out; so many of my peers who are just as qualified, competent, and hard-working as me, if not more so, have seen their Plan A's fail and needed to return to the drawing board. Lucky because I already know what it feels like to watch my Plan A go up in smoke, and I know I can survive that feeling and move on from it. 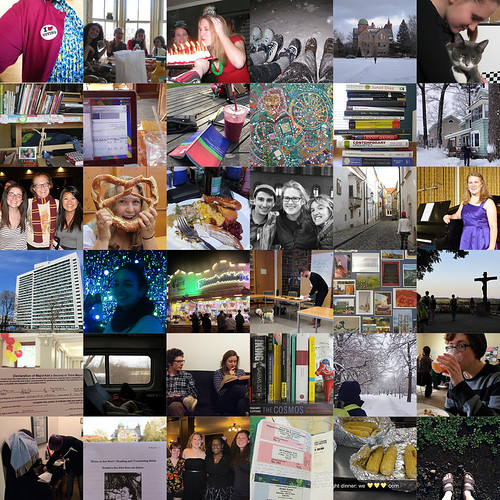 Thanks to the magic of InDesign, one photo from every single one of my posts that included a photo (so actually about two thirds of my posts) all in one place.

I've also been lucky to have this blog for the last four years. Not all of my posts are great pieces of writing, in fact most aren't. Some actually make me cringe, but the 56 posts that comprise my blog are arguably the best record of my time at Oberlin. As this blog shows, that time wasn't always entirely happy. Sometimes I was deeply sad, anxious or lonely, but often I was just the opposite: inspired, excited, joyful even. I tried to emphasize those latter feelings without ignoring the former and still remaining honest - I hope I managed to do that more often than not.

After pressing "publish" on this post, I will continue to write and take photos to document those highs and lows, maybe on my personal blog, maybe somewhere else, but I likely won't have access to this platform again. So before I go, I'd like to thank everyone who read even one of my posts. Blogging for Oberlin has been one of my most valuable college experiences and I can only hope that future bloggers will get as much out of it as I have.