I recently wrote about my first major (here), and after a semester of fighting for it, I've now been approved to declare a second one: Linguistics!1 Oberlin doesn't have an official Linguistics major, but students do have the option to write Individual Majors in pretty much anything, so long as it's legit. All you have to do is get a proposal passed by the IM Committee, and you can major in the field of your dreams! Sounds good, no? But IMs are, shall we say, not for the faint of heart. Most Oberliners don't have the time and energy to spare for the forms and meetings and signatures and revisions and other frustrations involved in the process (which by the way doesn't ever end, not even after you declare), so only a handful of us do it. I didn't have the time either but I tend to make damn-the-torpedoes decisions when I get excited about things, and I find Linguistics quite exciting indeed. 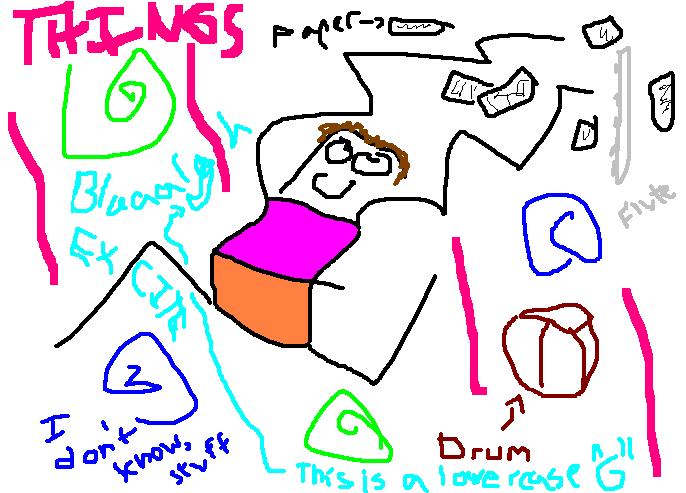 "All The Things Ida," by Moritz Hoequist. It is a beautifully accurate illustration of me when I am excited about something.

Somewhere around the middle of last year, I was running into things related to Linguistics with astounding frequency, and, without really noticing, I became breathlessly fascinated by what I found. I latched on to Obies who said they'd studied some Linguistics and pumped them for information. I got on the internet. I talked to my friend Clay, who is majoring in Linguistics elsewhere. The more seriously I considered studying Linguistics myself, the more my excitement snowballed. It became thrilling enough that I trooped to Peters one day early last term and got myself permission to look at past Linguistics Individual Major Proposals, and that half hour pretty much sealed the deal: I very clearly remember standing in front of the filing cabinets, leafing through the proposals, thinking to myself, "I want to take these classes. I want this to be my curriculum. I could write this stuff. I could do this," and being so overwhelmed by the prospect of actually majoring in Linguistics that I laughed and cried the entire way home from Peters. I immediately wrote my advisor an email that read, "I had the most joyous and enormous revelation today. It is as follows: I am majoring in Linguistics and nothing can stop me anymore. I am done waffling. I've thought about it a lot, I've slept on it a lot, it's been in the back of my head since before college. I've tried everything else I wanted to try, in terms of classes. This is what I've been searching for my entire academic life."

I was ecstatic for a long time. People would ask me how I was doing and, instead of answering, I would involuntarily start to laugh because I had no better description of my state of mind. Anyone who stood still long enough for me to talk to them got to hear about my decision, and, to my surprise, I got a great deal of hearty support in return - a friendly acquaintance of mine told me that she felt strongly that I should do Linguistics, simply because the one time she saw me talk about such things was by far the happiest she had ever seen me look. Other people who knew me better told me they were glad I'd finally taken the plunge, because I obviously loved it. After a while of being perpetually pleasantly surprised, I stopped questioning the ubiquitous approval my decision was garnering and just accepted that the universe seemed pretty into this idea of me doing Linguistics. 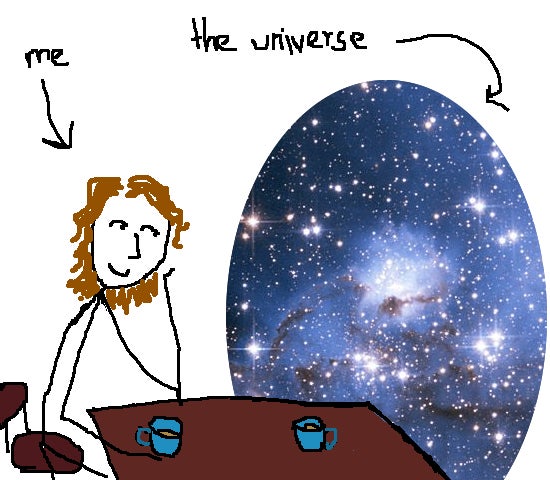 Life is rather nice when the two of us are on good terms.

As it turned out, it's a good thing I was given that initial momentum, because my quest got very grueling very fast. I didn't have time to draft the proposal until Spring Break (a month after my decision), but after that, I spent every free moment on it. I began to see why my advisors had taken such care to make sure I knew the process would be an arduous one. Essentially, the task is one that, under normal circumstances, is done over a long period of time, collaboratively, by multiple trained experts in the field in question. There is much to consider. (Specific requirements for Oberlin IMs can be found here, if you like.) Not least: you have to provisionally lay out the entire rest of your Oberlin career, justify every single class you want to take, and develop what is basically a capstone. If you're like me and haven't had much proper training in the field yet, that last bit can be fiendishly difficult - I spent a lot of time buttonmashing my keyboard in frustration and howling "How am I supposed to know what I want to specialize in two years from now?!"

And drafting the proposal is only the beginning. Each of your advisors will have intelligent, critical, sorry-now-you-have-to-rewrite-this-entire-section things to say about it, as will the chair of the IM Committee, as will anyone else you ask for advice, probably.2 And finally, when your huge, beautiful baby is all typed up and formatted to specifications, you turn it over to the Committee. . . and they get to tell you everything that's still wrong with it! (Fun fact: the IM Committee almost never approves a major on the first go-round, and they have no qualms about telling you that in advance so that you don't get your hopes up.)

So yes, writing a major is a formidable task. But it does fulfill its purpose, which is to make sure you've thought thoroughly about why you want this, what you want it to be, and what you want to do with it after it's over. It is definitely a refiner's fire.

Thankfully, even having come out the other end of the IM proposal process, I still burn for Linguistics. The most grandiose-sounding but also truest part of my proposal reads, "I wish to pursue Linguistics because it is the one field I love for its own sake; it is the one field I simply can't not do. I am drawn to its methods, goals, and conundrums, and believe that all of these fit well within the liberal arts education I hope to complete - namely, one that equips me to approach problem-solving openly, fairly, and from unexpected angles." This is true not in the sense that the rest of my proposal is false, but in the sense that when I read those sentences (especially the first one), I feel something in me go "YES. CORRECT. THIS IS GOOD. PROCEED."

I can't wait for school to start again.

1. The reason this post is called "Llamas" and not "Linguists" is that there's an excellent meme template called Linguist Llama that I thoroughly enjoy these days. (Props to you if you got that.) When I first saw Linguist Llamas two or three years ago, I didn't understand most of them, but a friend reminded me of their existence recently, and I was proud to find that I now think most of them are hilarious. I understand linguist inside jokes! Here, have one: 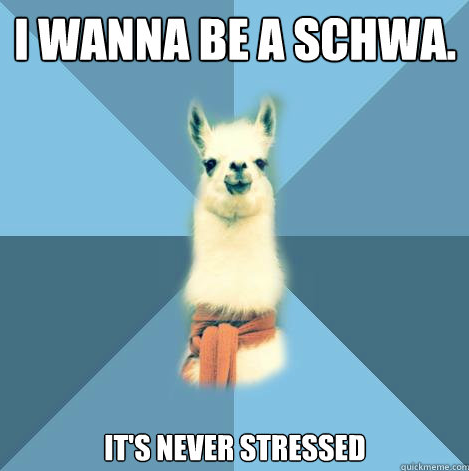 This is the first Linguist Llama I ever understood. It still makes me chuckle.

2. I am hereby extending a giant thank-you to everyone who helped me with my IM proposal, whether via constructive criticism or moral support. I am indebted to all of you. This is not a task I could have undertaken in isolation.

And, here, I thought that it was called "Llamas" because it was about your proposal. Proposal llama? What, no, that's just me? Okay.
I am so, so happy for you, not only that you completed this arduous process, but that you found something to be so passionate about in the first place.
And I love your picture of you being on good terms with the universe.

And to think it all started with Llamas With Hats!

Congratulations on doing the work necessary to pursue this passion. I admire you and am excited that you are excited. I cannot wait to hear about what you have been learning about words, and sounds, and so many things.

Discovering Llama memes everywhere now. Thanks for the suggestion.

2) "Damn-the-torpedoes" made me belly laugh.

From one lover of linguistics lover to another, congrats on having your major approved! That is really exciting.
Also, I'm loving Linguist Llama. I don't get all of the jokes, but I'll probably get more of them by the end of next semester (I'm signed up for Intro to Linguistics).

I had two thoughts on reading this:
- Kaaaarrrlllll......

- I want to be a student and feel like that again.

I'm just going to record for posterity that none of these llamas had anything to do with each other whatsoever, but that the convergence of llamas in this post pleases me greatly.