The summer before I came to Oberlin I was very excited to be attending such a prestigious college. I could not wait to get on campus and meet all of my classmates and sign up for my classes. One thing that stayed on my mind was what would the coursework be like. I had always heard legendary stories about ten-page research papers and long nights in the library throughout the years, but I had never seen any examples of work done by college students. With that said, this blog will give you a peek into what my coursework for American Studies & Popular Culture was like during COVID-19. Since school moved to distance learning my professor felt it was best to make changes to the syllabus and decided to implement a project where students could post blogs that focus on the social aspects of COVID-19. Below are a few of the blogs I did for the class. I hope you enjoy!

Social distancing has led to people staying in their homes and driven the unemployment rate up. Social distancing has challenged how we interact socially as Americans and changed what we look at as an "American space." Before, gathering to protest was an activity inherently American, thanks to freedom of speech. Now, if you gather to protest, you are looked at as ignorant and in some cases a traitor. On social media, I have seen people describe those that are congregating in large groups as unloyal and untrustworthy. Social media has become an insubordinate space as people from coast to coast join popular artists’ live streams to listen to them perform their music instead of attending a concert. It seems like Instagram Live has become to the black community what Reddit is to the LGBTQ community, as discussed in our readings for class. While digital platforms have been reconfigured to fit the needs of our life in quarantine, so have physical places. In New York, the rooftops have become insubordinate spaces. People have been singing from the rooftops, holding conversations from the rooftops, and most recently, crying out for help from the rooftops. Americans are reconfiguring the way we protest, moving away from picket fences and more to rooftop signs. While I do acknowledge there has been some picketing going on, even that has been reconfigured as many picket fencers have attempted to maintain a six-foot distance the entire time. Americans can't pay their rent, so they move to the rooftop to let the world know.

Pictured is an Instagram post of NFL players Stefon Diggs and Jerry Jeudy handing out meals to Coronavirus first responders. It is great to see two individuals in the NFL 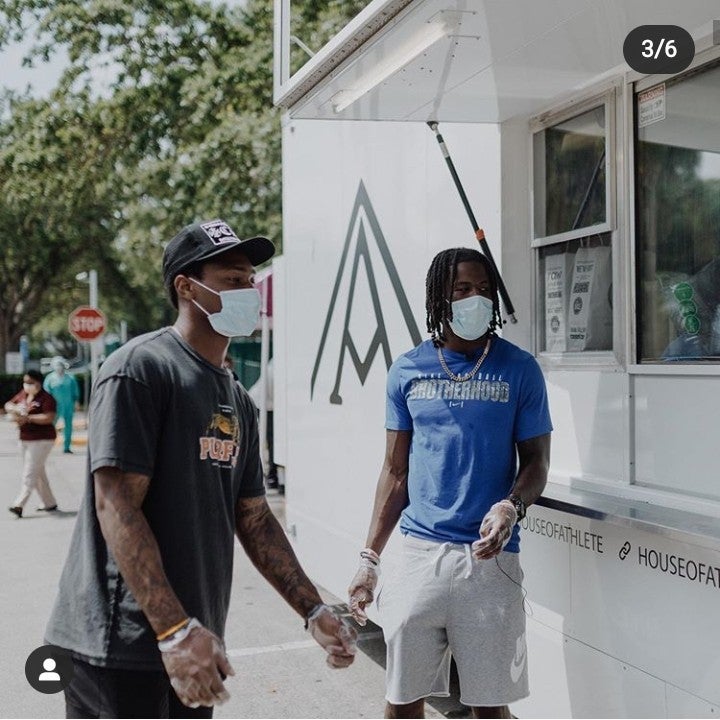 brightening the day and supporting the healthcare workers that are crucial to fighting the coronavirus. The NFL as a whole has done a great job of improvising to help the fight against Covid-19. As recently as today the NFL used the yearly draft to raise $100 million dollars for Coronavirus relief. On top of that, the NFL managed to do it in a way that complied with the rules of social distancing, as the commissioner of the NFL Draft announced the picks from his basement, and the broadcasters were filmed in the ESPN headquarters. Not only were the three days of the NFL Draft something excellent to raise the spirits of those watching, but it was also great to see how the NFL has improvised to help provide relief in these troubling times.

Pictured is a meme that was posted on the popular Instagram account Daquan. The joke is that cops say that they do not fear the Coronavirus because they are used to danger, but this lack of fear does not apply to black males. By putting a durag on the image of the 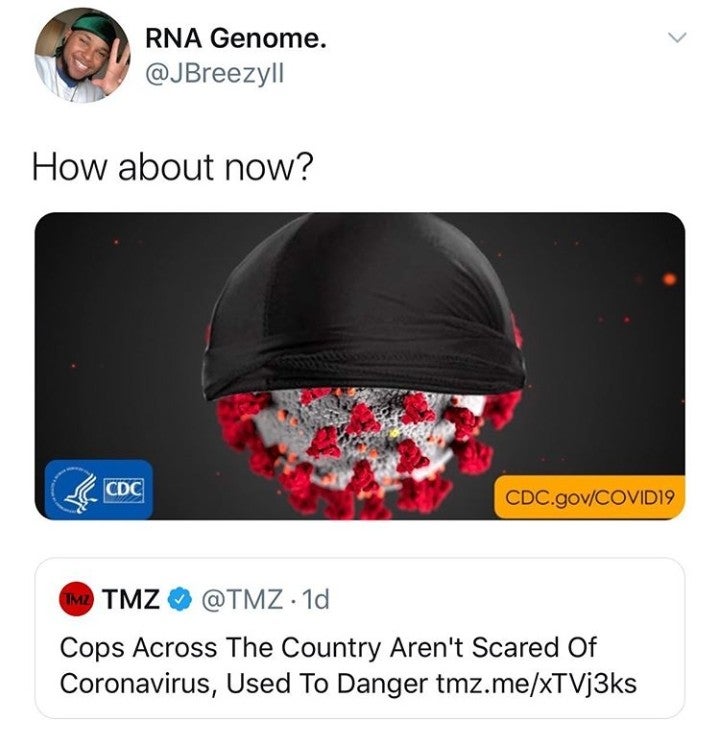 Coronavirus, one is blackifying it, as durags are typically worn by black people. The Coronavirus has revealed lies that were repeatedly told to black people in the United States. Cops repeatedly use the excuse that they were in a pressurized situation which led to them shooting innocent black males. The United States told black people that they don't have the money to solve the Flint water crisis but suddenly can send two trillion dollars out when the economy is about to crash. Impoverished black people across the nation were told giving everyone free internet is unrealistic. It was all a lie. Black people across the nation must push for the changes that the Coronavirus revealed to the world were possible.

If you liked seeing an inside look on what classwork I was doing this semester make sure you comment below! In the future, I will look to spotlight other classes from a variety of different departments.