This is my bike. Her name is Chelsea. She is old. She has a ton of rust. She clanks with every rotation. The brakes screech. But I love her anyways. (Excuse me for writing that paragraph with kindergarten grammar.) 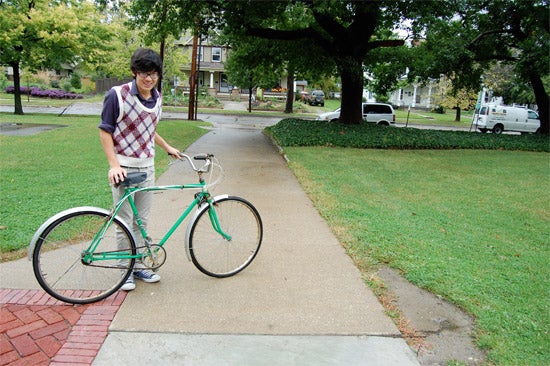 I feel a sort of exhilaration from something as simple as biking around Oberlin well past midnight with the cold wind whipping my face. Most of this could be attributed to the fact that I was never really much of a biker when I was younger. I learned how to ride a bike in the 4th grade and never really got comfortable biking around cars. As a result, when my friends would bike over to the nearest basketball courts, I would be the one lagging behind on foot.

To be honest, I am not very comfortable with many forms of transportation other than walking. I only recently learned how to tread water and my parents seldom let me drive, despite the fact that I have a fully functional, non-expired driver's license. For most of my life I have been regulated to merely walking from point A to point B or bumming a ride from my gracious high school friends. (Or driving a friend's car when he or she is too tired to drive. This information is confidential, by the way.)

Consequently, I love finding little reasons to hop on my bike and get away from my dorm room. It makes me feel independent... even more independent than being a college freshman away from home for an extended period of time with no adults telling you what to do. I'll look for any excuse to ride Chelsea through Tappan Square, to the Art Building, downtown... anywhere! Thus, I present to you some evidence:

Exhibit B:
---
Lizzie: Hey Karl I'm here at CVS and I don't have enough space to bring back these orange juice--
Karl: I'LL BE RIGHT THERE!
---

I know, I probably sound pathetic for getting riled up at the thought of touching cold handlebars, pressing brakes and slithering through sidewalks. Make fun of me. Go ahead. We'll see who's laughing when I run you over next time I run a silly errand for a friend. (Kidding!)

In all seriousness, I have certainly gotten my money's worth out of Chelsea... considering she was FREE! That's right. You heard me. F-R-E-E! This is the part of my blog where I incessantly brag about how I snagged this deal.

Several weeks ago, I heard from a friend that there was a man a couple miles outside of town that gave away bikes for free. I thought the whole situation was incredibly sketchy at first, but then she told me that the man gave everyone a free Bible as well. It's funny how free Bibles can make anything questionable instantly sound reputable.

Thus, a few friends and I set out for this mystical Narnia of free bikes. After a long, half-hour trek through 25 mph winds and menacing silver clouds, we reached a barn with a sign outside reading "Trespassers Welcome." Cute, but also kind of creepy. Next to the sign was a bicycle wheel, reassuring use that this was the pot of gold at the end of the rainbow.

We wandered towards the backyard and met Bryce, who deserves one of those cheap, cheesy ribbons at Ben Franklin that say "Nice!" in shiny gold lettering. Bryce enlightened us with the story of how he ended up in Oberlin, Ohio. In another realm, Bryce used to be a hotshot CEO living in Avon, Ohio, with his wife and kids. One day he realized that everything he was living for meant nothing to him. Bryce then gave away all of his worldly possessions to those more needy. He and his family moved out to Oberlin, taking only what was necessary, and started collecting and fixing up throwaway bikes.

Bryce directed us to a barn filled with bikes, with their conditions ranging from ones that were fairly new with minimal damage to bikes that were slightly dented with missing wheels. There were even tricycles and pogo sticks, which admittedly caught my eye until I reasoned that a pogo stick would not be a smart form of transportation. I set my eyes on the most beautiful, olive green Schwinn Speedster that sparkled amongst a cloud of dusty bikes. Sadly, this bangin' bicycle beauty was a wee bit tall and the seat jabbed my genitals every time I tried to force myself on. I was disappointed to say the least.

Still, there was an overabundance of bikes that were begging to be claimed. I happily settled for Chelsea, who has proven worthy of my love. My eyes met her wheels and it was almost too perfect. After polishing off some specks of dirt and scrubbing away the rust from her handlebars, I was more than pleased with my choice of bike. Equally pleasing was the pad thai I ordered at The Mandarin a couple hours later. Mmmmmmm... noodles....

If I wasn't clear enough, get a bike. Seriously, it helps. And if you're looking to save money, take up this offer and head down West Lorain.

Wow! That's fantastic! I think everyone I know names their bike. I like getting introduced.

karl, you so talented. now go get me crackers and hummus please.

Your bike story is wonderful... and I love having a bike. I have no idea how I survived the last three years without one.

I need to name my bike! It's spray painted and awesome and I love it too!

I LOVE YOU KARL

I, too found a bike that I love this past summer. She is yet to be named, but I'm taking suggestions. She's a blue 3-speed from England, probably about 50 years old, and her saddlebag baskets carry almost anything I could need. I didn't ever bike much as a kid (who wants to bike on rural gravel roads up and down hills? Not a bookworm of a girl like me.), so our love is all the more precious for its late blooming.

aww karl, you're adorable! i've been meaning to go to the bike minister for a while now...i guess it's definitely worth it!

And once again, another Oberlin freshman becomes one with mother nature in form of rebellious transportation!