This year for Winter Term, I am on campus at Oberlin working on a documentary about campus architecture, a topic I have discussed previously. When I've spoken to some of my peers and friends about my project, I've been happy to see that they've shown excitement in hearing about it, because that means that this documentary will have significance to people outside of myself! I do think it's a shame that Oberlin doesn't have a larger architecture program (which I think is still a generous way to describe it), because in my opinion, Oberlin would be a great place to study architecture in a liberal arts environment because we have buildings designed by some of the most iconic architects in American architecture on our campus (A FRANK LLOYD WRIGHT BUILDING, PEOPLE! FRANK. LLOYD. WRIGHT.). But fear not, my mother (who is an architect herself) has actually worked with a youngish architect who graduated from Oberlin some time ago, so it's still a possibility for those who want it!

I apologize for my digression, I'll get back to the purpose of this post now, which is Winter Term at Oberlin. Initially, it startled me how quiet campus was, and how rarely I saw the friends that I know are also on campus. In all honesty, the first night I was here, I made the mistake of thinking that Dascomb would be open for dinner, so I just sat in the Dascomb lounge for twenty minutes in complete silence while not a single soul passed by, and it had an eerie Twilight Zone quality to it (I was preparing myself to hear Rod Serling's voice come out of nowhere). But I've become used to the mostly solitary life, and the experience of living in a double alone without my roommate and good friend from high school, Maya, though I miss having someone to send cat/dog videos to in the middle of the night.

A useful item that's helped me fill the void of my roommate-less open double has been my bluetooth speaker, which I connect to my laptop whenever I'm listening to music, but also when I'm watching movies or tv shows, too (sound design is something I strongly prioritize wherever I can). It's made the room seem less cavernous simply by enhancing the sounds I listen to. I've also found that it's been handy for me when I'm editing recordings of my voice for my documentary, because while headphones are fine, I've never completely trusted them to give me a clear idea of what my movie is going to sound like when it's played through speakers.

Being on campus has also allowed me to do a Winter Term radio show on WOBC! This show is different from the one I've been doing since my first semester (Sounds of the Silver Screen) in that it's called Jules's Diner and it's comprised of me speaking in both French and English and playing music that I think would fit the ambiance of a diner. It's silly, but I'm glad I've gotten the chance to do something different from what I usually do on the airwaves. It is on Wednesdays at 6PM, and you can listen in on wobc.org!

There's a couple things I haven't been a huge fan of since I've been on campus, though, and I'm not much of a complainer. I was enormously bummed to find out that the dining halls don't serve breakfast during Winter Term. Like, colossally disheartened to the point where I had an existential crisis over the meaning of having scrambled eggs and breakfast potatoes every single morning. However, I have resolved this issue by getting breakfast at places in town, and getting to stretch my legs early in the morning on the way over.

I breathed a huge sigh of relief when I learned that Philips Gym stays open until 10pm weekdays, because I was absolutely not going to plan on sacrificing my running schedule over Winter Term. However, I endured a baptism by fire when I showed up outside on a Sunday morning, only to learn that Philips is closed on Sundays during January (it was also like 25 degrees Fahrenheit out). With little to no prudence, I went back to my room in Burton, put on some slightly warmer running clothes that still left me underdressed, and dashed across campus to South Hall, which I knew has a gym in its basement. I realized on my way over to South that the clothes I was wearing would only keep me warm for when I was continuously running outside, and wouldn't insulate me at all if I wanted to walk back to my dorm from the gym in South. At this I angrily hurled Shakespearean insults at myself as I continued to run in almost a full sprint across campus, knowing that I would have to run quickly again back to my dorm after my workout to stay warm. Lesson learned!

Aside from these new ways of how to Oberlin, I've also learned how to brave an Ohio winter more effectively for my project. My number one enemy has been the weather, specifically, the wind and lack of hills. Since I am shooting this documentary all by myself, I decided that I didn't want to carry around a lot of excess bulk for the sake of mobility and my shoulders. Only to a certain extent have I accomplished this, because the super strong Midwestern wind is not to be underestimated. I'm glad that I remembered to take a fleece balaclava with me, because I'm pretty sure my face would've cracked off otherwise, even if I looked like a Medieval knight crossed with a ninja. The secret to being outside for a while and not freezing is just wearing a ton of warm layers (your warmest pair of pants with a pair of warm leggings underneath and two pairs of socks), and always, ALWAYS having a scarf handy. 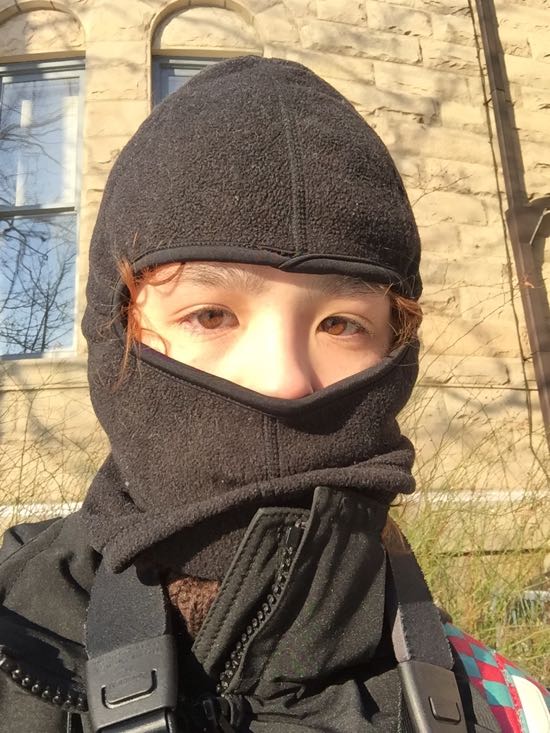 Me trying to stay warm on a ridiculously windy day... Note the fleece balaclava and the camera strap around my neck.

Unfortunately, I forgot my main pair of winter gloves at home, and thought I'd be able to get by with the ones that I left in my drawer in my dorm. I have not, and it's hurt my productivity while I was filming because I'd only be able to stand outside for about fifteen minutes at a time on the harsher winter days before my fingertips would go completely numb through my gloves, and I'd have to go inside somewhere. If anyone on campus saw a lady standing in Peters commons aggressively breathing warm air onto her hands, it was probably me. So always remember to bring warm gloves.

Weather problems aside, it's been lovely to get the chance to really explore Oberlin's campus with this project. During the stages of pre-production, I mapped out all the buildings that I wanted to include in my documentary, which included some buildings I had never personally stepped inside of, along with those that I felt I knew really well. I've found that when I had the time to take my time and really look carefully at my surroundings, there's a quiet beauty to many of Oberlin's buildings (if you don't believe me, go to Carnegie and stand in the entrance vestibule for at least ten seconds and look upwards) that I knew was always there, but never in such detail.

I do wish I had gotten a buddy to hang out with me during shoots sometimes, especially when I'm in residence halls that I've never been to before. Before my project, I had never been inside Talcott, Baldwin, Old B[arrows], Allencroft, or Johnson, and the last thing I wanted to do was freak out anyone who actually lived there by appearing in the form of a wind-disheveled, rosy-cheeked pile of layers going around taking pictures and videos of the place where they live. It's common for me to become nervous when I'm shooting somewhere by myself, and so I think in retrospect, having a friend to vocalize my fears to in between recordings would have minimized the adrenaline rush I felt every time a floorboard creaked underneath my foot. In the majority of these instances, I stayed mostly on the first floor of the building, away from where people may have been sleeping (as I began shooting early in the morning). I sincerely hope that no one was confused or irked by my presence, if they even noticed I was there.

Overall, I'm very thankful to have the experience of just being able to pursue something I've always had an interest in since I got here, but never got the chance to seriously look into because of my classwork. I appreciate the freedom that comes with Winter Term, because I've been able to keep a disciplined schedule for myself of getting up at 8:30, and being done with breakfast at 9:45 at the latest. I am glad though that Winter Term is only a month long, because the lack of regular contact with my friends is something I wouldn't want to become a regular thing. Still, being in the town of Oberlin hasn't felt very isolated, aside from the creepy twenty minutes of uninterrupted silence in the Dascomb lounge my first night, which for a New Yorker going to school in the Midwest, is always comforting.