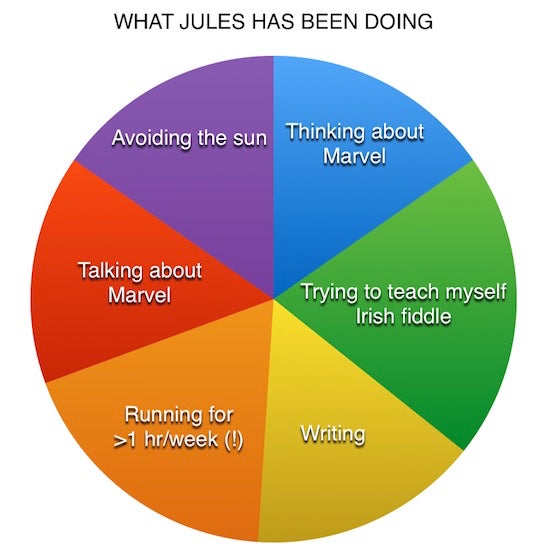 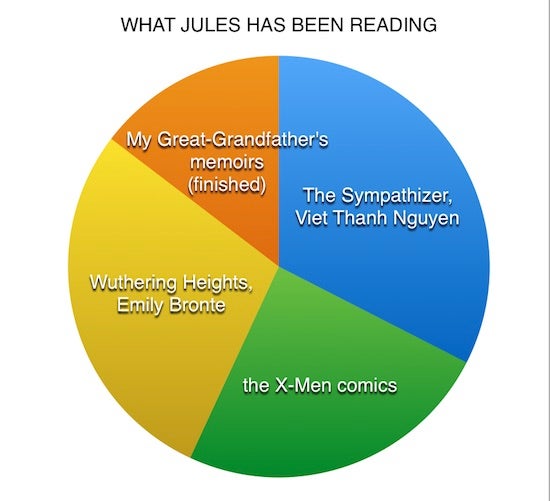 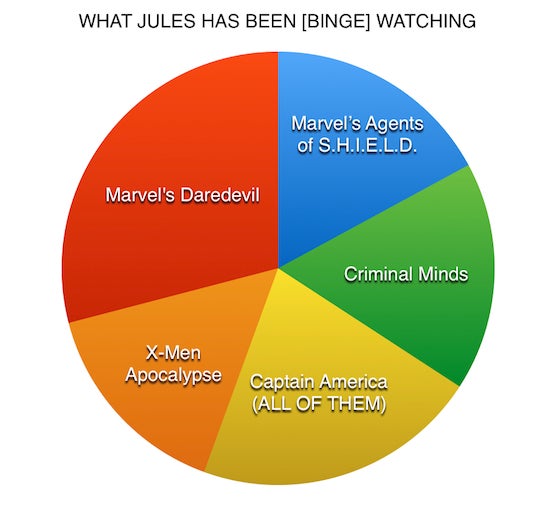 It's summer! I got my hat on backwards, and it's time to frickin' party.

OR, do everything that I've listed in my piecharts provided for y'all, plus a little more. Either way, I'm going to brush up on both and talk about my feelings for a bit, like I normally do.

To be frank, the last few weeks of being home have been the strangest few weeks I've ever spent in my neighborhood, likely due to the transformation I underwent in my freshman year at Oberlin. On a few occasions, I crossed paths with people I've known since I was a kid, and when they re-introduced themselves to me, I became confused. I've been aware for a while now that I tend to switch up my appearance semi-frequently by changing my hair once or twice a year, sometimes more depending on my angst level. However, I wasn't expecting the addition of bangs and red hair to make me that unrecognizable by those who have known me a long time, so I've accredited this vague je ne sais quoi to be the product of Oberlin. These changes I've found upon closer reflection to be both physical and perhaps in the muddier realm of maturation. (*cue "Changes" by David Bowie*)

At the moment, I feel a lot like Steve Rogers (you know, Captain America), in that I've returned home from elsewhere in this completely new form, both physical and psychological, that no one else is quite used to yet. In case you haven't read the comics or seen any of the movies, Steve Rogers starts out as this five foot four, ninety-five pound stick of a Brooklyn boy (in the comics he's from the Lower East Side in Manhattan, but I'll stick to the movie version) who genuinely wants to serve his country in World War II. But because he's so frail, the Army isn't too keen on having him there, except for a German scientist who recruits him for an experimental drug he's developed. The scientist gives Steve the drug serum, and boom, like the expandable water figurines I had when I was a kid, he grows into a muscular six foot two frame and the rest is history for the greatest soldier of all time.

I strongly identify with Steve's sense of disorientation that he experiences post-serum, now that I'm back home for the summer. I haven't exactly gone through an extreme body transformation, though my new running hobby has restored the existence of my leg muscles, yet there's something else that's indicated that a major change has occurred in the time that I've been away from home. In my mind, I totally feel the difference between pre-serum/pre-Oberlin Jules and post-serum/post-Oberlin Jules, and I'm not exactly sure how that's played out in my physical demeanor, but I get the impression that it has. You could say that I'm bigger and stronger now because I guess I'm armed with all these new concepts and facts I've learned over the year. And additionally, in terms of the acquisition of general life experience, I've grown immensely during my first year of college, as I'm sure many others have too, in a way that I never really have before because I was faced with problems and situations that I hadn't previously encountered. So in surmounting the aforementioned things that I detailed in my previous blog post, my mind and body were challenged in ways that only made them stronger, the same way that an athlete goes through a period of training.

Whew. That was the heavy, deep stuff, and I hope it made sense.

So what have I been doing this summer, besides obviously thinking really hard about Captain America? I've been holding down two internships, one at a local art museum where I've been doing a vast array of tasks from all disciplines (mostly photography, video, and communications things), and another at an architecture firm, where I've been doing tasks that don't require an architecture degree. I've found both internships to be valuable, and I've honed lots of skills pertinent to communications at the museum that I wouldn't have been able to imagine beforehand. Plus, I've gotten the chance to interact with the artists whose work is going to be in our upcoming exhibition, and even helped them install their pieces! That exclamation point wouldn't be there if I wasn't really excited about that, it's been great.

Writing-wise, I've challenged myself to write either a short play or a short screenplay every day. I have a book of writing prompts that I've had for years, so I've been pulling ones from there to get something out onto the page. The highlights have been a short screenplay I wrote about a woman who is part of the 10% of the American population (apparently, according to my writing prompt book) that has claimed to have encountered Satan, and a play about a radio DJ that receives a call from a listener who says they're in love with them.

Besides writing, I've gotten much enjoyment from a new hobby I mentioned earlier, running. I don't know exactly what inspired me to think a few weeks ago, "hmm, I should go on a run soon," because if you had said this to me a year ago or even a month ago, I would've laughed. I had this preconceived notion that running was going to bring pain and suffering, which was dumb because on my very first run, I ran comfortably for a full hour. So now I run about three times a week, and it's something I look forward to at the end of the day (endorphins don't lie). I've started feeling physically stronger like I did when I was a serious athlete in middle school, plus I've become more disciplined about my weekly schedule because I've had to plan which days I'm going to run on. Ultimately, it's a win-win situation.

In addition to finding new things to do, I've done a good amount of rediscovering old things that now impact me differently, and perhaps more significantly, than when I was younger. I've been trying to teach myself how to play Irish fiddle music, because I figured that since I've been listening to it since birth and I'm already a classically-trained violinist, I'd be able to bust out a Chieftains arrangement in two seconds. Well, turns out I was dead wrong about that, and it's been a difficult journey with more than its fair share of frustrations. However, when I was ranting about this to my sister, she said, "it wouldn't sound awesome if it was easy to play," which has reminded me to stop being so hard on myself. I've always relied on my skills as a violinist to act as a sort of base for all of the other instruments I play, so for me to feel like I'm really bad at playing something on it is extremely humbling. So for now, I'm going to keep chipping away, and I plan on bringing my violin back to Oberlin with me so I can continue practicing.

I've also read my great-grandfather's memoirs, which I was always knew existed in my house, but never actually bothered reading because he died before I was born. That sounds terrible to say, I know, but I'm really glad I decided to read them, because it has humanized this very stoic man I had always envisioned. I was really surprised to see how much I had in common with him, and it made me wonder if I was just a smaller version of him. I knew he had a tragic early life, that he lost his mother, sister, and stepmother, but I didn't know that he had a voracious love of theatre, literature, teaching, and journalism. I had only seen him as a man struck by enormous tragedy before I read his book, and never considered what his personality and interests were. Even if I'll never get to meet him, it's been wonderful to learn where some of my passions originate. I'm sure my position as a staff photographer on The Oberlin Review would've made him very proud.

I now think about where I was this time last year, when I was fresh off the tails of high school and pretty darn directionless with how I was going to spend my summer, and yeah, I can totally see why some people have not been able to recognize me. Oberlin has pushed out a more focused, concretely ambitious version of myself with a better understanding of how to divvy up my free time into productive blocks. I hope that I can continue to strengthen these skills when I return back to Oberlin in the fall, but for now, I say to my old self, "ON YOUR LEFT."