It all began almost a year and a half ago, when I decided I wanted to come all the way to the United States of America for my tertiary education, rather than staying home in New Zealand. The decision seemed to make sense at the time — see, my extended family is all American, and American Universities are generally better than those in NZ, especially if you're unsure about what you want to study. Or so I thought.

And then it was done.

Months passed; I graduated high school and completed my exams in November (my academic calendar being six months different to match the seasons down under), worked part time a little, but mostly enjoyed my New Zealand summer. It was the summer before we went off to University! There was just something inexplicably special about it; being finally graduated, knowing we were all about to go off to a better place. That's the summer they make stupid movies about.

Well, I finally found out which colleges I got into. I was waitlisted for a few top schools, and after much deliberation, Oberlin seemed to be the right choice if I didn't get in off those waitlists. It's funny; Oberlin wasn't even on my initial list for the college applications — it was a late addition. Obviously, I didn't get in off any waitlist, which I was secretly glad for, as Oberlin somehow grew on me. Still — more doubts, more niggling.

Just as it started to get colder, I flew to the states in May to see my brother graduate from CSU, then stayed with my grandparents in Louisville and worked full time to save some money. It was like living in a dream — every day indistinguishable from another. When you work a physical labour job full time, you fall into a zombified state of existence. Wake up, eat, go to work, eat again, come home, eat again, go to sleep. Wake up... When you're a zombie, you don't think much at all; especially about going to University. Have you ever seen a zombie at Uni?

Out of nowhere, the day finally came.

I arrived at Oberlin College.

I had waited so long that I didn't even know what to expect anymore. The niggling doubts were nowhere to be found. And you know what? That made it so much easier.

I walked in with no expectations. No pre-conceived ideas of what Uni would be like. No idea of how my life was going to change. While I've only been here six weeks (that long already??), I can say with 100% certainty that those niggling doubts were 100% wrong.

See, on paper, it had sounded difficult. Travel over 13,470 kilometres to a country I have never lived in, and make a commitment to live there for the next four years of my tertiary education.

Well, maybe a little bit. Maybe I still am.

But it's funny how misleading it was to try and imagine life by what was written on paper.
It's so easy to question your decision at every stage, to compare your decision to your mates'. I stayed in New Zealand so long that they came back for midterm breaks — and you just know I was really questioning myself then. There they were, telling me of how good a time they were having; how could I not wish I was there with them?

Sometimes, you just have to make the plunge. Take a risk. Make a commitment to travel over 13,740 kilometres to a country you had never lived in for University. Decide differently from your mates.

It's worth it. Trust me. Even if you end up in Ohio. 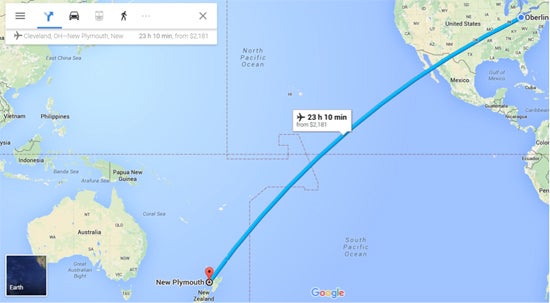 An important note: WE ARE NOT AUSTRALIA.