Last Thursday, for the third night in a row, my host sister looked up from her iPad and cheered "No school tomorrow!" For the third night in a row, my heart sank and I groaned quietly at my computer. I'd never disliked snow days before - but then, I'd never yearned for school more than I do now. This month, I'm living in Seattle with the family of a current Obie, attending the School of Acrobatics and New Circus Arts (SANCA), and it's basically a dream come true.

Oberlin, since the founding of Tumbling Club (of which I will be co-chair starting next semester!), has had a Winter Term partnership with SANCA that involves a certain number of students living in Seattle and taking all of the circus classes that SANCA is equipped to offer. To wit, that includes tumbling, acro, handbalancing, unicycle, tightwire, trampoline, German wheel, rolling globe, juggling (balls, rings, and clubs), static and flying trapeze, aerial rope, fabrics, and Chinese pole.

If you think all of that plus daily conditioning sounds exhausting, rest assured: it is. 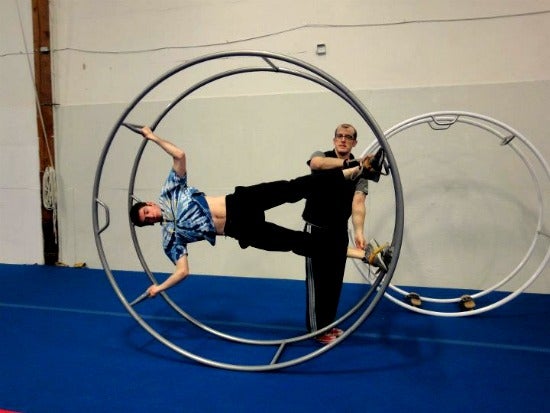 Will, trying desperately to move his German wheel. Rotating a huge steel frame around yourself using only the shifting of your weight as momentum is not as easy as you might think!

This is how it goes: we lucky devils who've been accepted to the program arrive at SANCA by eleven each morning, play our butts off until one o'clock, go on lunch break, and put in another two hours of play in the afternoon. During the last half hour of our hour-long lunch, one of our teachers comes into the room that's been put at our disposal and pops in a circus movie for us to watch - the purpose of which is to educate us about circus styles old and new, and the cozy side effect of which is to make us feel like little kids whose parent just put on an entertaining film. Our room is devoid of furniture, so we just sort of group up on the carpet and go "Oooooh!" in unison or "I want to learn that!" when the performers pull off impressive tricks. It's all very grade-school. 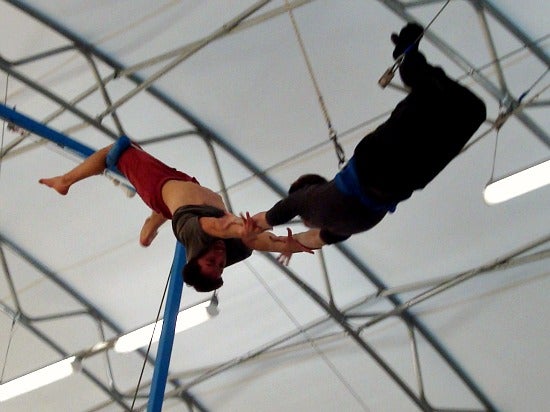 Sometimes when we're doing flying trapeze, I like to pretend that we're as awesome as the people in the videos we watch.

This five-hour cycle of class and lunch and class is the backbone of our weekdays, but often there is more happening both before and after. As part of the Winter Term program, we shadow our instructors as they teach regular SANCA classes in the morning and afternoons; my schedule, for example, is to shadow at 5 and 6 PM on Mondays, at 4 on Tuesdays, and at 4 and 5 on Wednesdays. Add the occasional meal grabbed with a friend and take into account my two-hour commute home, and suddenly the day takes a lot longer to get through. Most nights I stumble in through the back door around eleven and go straight to bed (via the shower). This week, because we have to make up the snow days we missed, I'll be out late pretty consistently. 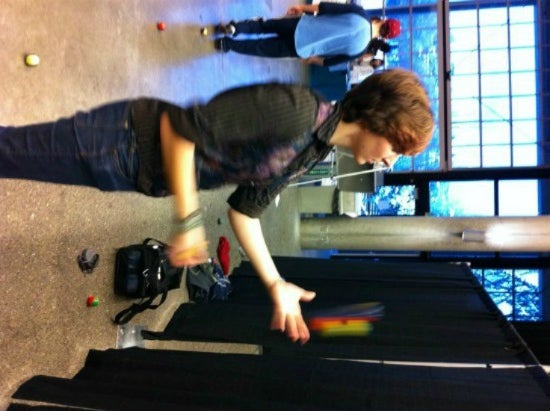 I'm out late on weekends, too. This particular picture was taken by Will; we had decided to visit a free juggling festival taking part in Seattle Center that weekend, and I was having a go at some of the toys lying around.

Not that I don't want to do extra things! Wandering around in Seattle can be great fun, and it would be a terrible shame to miss the weekend events SANCA invites us to (Friday night pizza, potlucks, parties, a renowned dinner theater circus called Teatro ZinZanni, and so on). That, and shadowing classes is invariably immensely valuable. As singular as the experience of trying something for yourself is, watching people teach or do things - and yes, the classes mostly consist of small children or older adults doing things that I can't yet - is also a legit way to learn. Not only that, and not only are the teachers literally all certified BAMFs, but SANCA's teaching strategy is intensely focused on the positive. This means, for example, that criticisms are framed as suggestions for improvement, motivation is never a question of pleasing anyone but yourself, and every class ends with obligatory high fives and some variation on "You worked hard today, and I can tell you've made progress - well done." It's an empowering environment. I, for one, am perpetually excited to be a part of a teaching strategy that lets me not only help the students progress but also foster their (and my!) genuine love for circus. In short, shadowing is something I look forward to.

Depending on the teacher, it can even be an opportunity to relax. SANCA enrolls a total of about 700 students, but classes tend to be between one and ten people, so if the students behave and the teacher doesn't need my help, I get to chill out and watch happy people play on circus toys. One of my shadowing assignments, a handbalancing class taught by SANCA's co-founder, is the exception: I asked him what I could do to be helpful, and he replied, "Participate." (So that's an extra hour of training I get to take part in. I love it, my muscles don't.) Being on friendly terms with the founders is another bonus that SANCA's size and atmosphere afford, and the conversations I've had with them have invariably been fascinating, amusing, and not a little enlightening. It takes wise people to set up such a well-run, universally liked, constantly growing school. 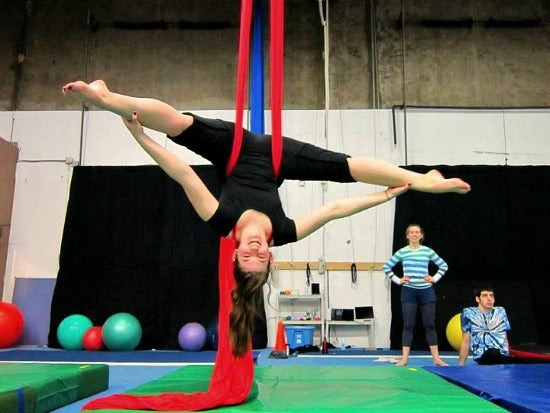 Allison, a fellow Oberliner, is sometimes also a happy person playing on circus toys. I mean, who wouldn't be, in her place?

The hired circus artists we learn from, to be fair, are also some of the most fantastic and humble teachers I have met. (And five of them are Oberlin grads! We're everywhere!) Most of them are young, some are professional performers, and all of them love to play on circus equipment - a love that translates well into the kind of teaching that SANCA encourages. I myself have been loving one particular toy a little more than the others, recently: ever since we were introduced to Chinese pole on the second day of class, I have been monstrously excited to work with it. Sometimes I almost think it's a shame that we get to sample such a broad variety of skills, because it doesn't leave nearly enough time to improve any one thing to my satisfaction.

This is a video my pole teacher posted to youtube about a year ago. In the background, you can see SANCA's main training space. In the foreground, you can see how terrifically much he's having to strain to get the tricks. Have I mentioned this stuff is mad hard?

Thankfully, since this is our third and last week of classes, we get to choose two areas of specialization and work on nothing but those two skills for about an hour a day - which, mind you, still isn't much (though my forearms seem to think that an hour of Chinese pole at a time is just plenty, thanks)! I have started getting the customary "pole kisses" on my arms, though, which I find encouraging. If I'm getting injured the way the professionals get injured, it must mean I'm doing something right, no? That's what I tell myself when I look at these bruises, anyway...

My second skill of choice is unicycle, a skill that requires mercifully little muscular input. Nevertheless, I have been told by my teachers that unicycle is the single most difficult thing taught at SANCA, and if this is not the truth, it is at least very close to it. But so what? I am determined to learn.

Ah, if only there were more time! I've only just gotten to the point where I can read on the bus and look up just as my stop approaches, and I've only seen a few places in Seattle. I've only now become comfortable enough to spend my free time exploring instead of being lost or nursing myself back to health. For all the pain SANCA has put me through and all the anguish Seattle's rain, ice, snow, and transportation system have caused me, I've begun to like it here.

But soon I'll be in Oberlin, and there's something to be said for that, too.

Ida,
I'm amazed by how completely you throw yourself into anything you love. Way to go!

David: Obies! They're everywhere! What a coincidence, and what a mind-blowing act. I wish I could do beautiful tricks for seven minutes straight.

Mom and Nora: Aw, it's like you guys are my own personal cheerleaders. I'm flattered. Thanks.

And, to any Obies considering SANCA as a winter term project - consider it wholeheartedly recommended.

We love having you all at SANCA! Even though I didn't really get to work with you all, it was fun seeing how much you were enjoying yourselves here!!

~Anna
(Coincidentally both a prospective student AND SANCA staff member)

Anna! Hope you caught a glimpse of the showcase last Friday - that was the most fun of all. And if you do end up in Oberlin, we should clearly endeavor to make up for how little we got to work together at SANCA.

I am still so incredibly jealous of your winter term. You have turned into a muscular beast. BEAST TERM.

Every term is beast term! I live a beast life, what can I say.

I am a HUGE FAN of SANCA.... Oberlin folks come visit a local circus in Cincinnati (well just across the Mason Dixon IN Ludlow KY) IDA let me know if you are interested in touring to Germany this summer with Circus Mojo to practice your German.... For the 6th year I am participating in a Circus Exchange with Circus Pimparello Learn more about this exchange here:

2011 Trip to the USA
http://www.youtube.com/watch?v=GOxBwrVkEG0

Hi, Ida!
I'll be a first-year at Oberlin this year (move-in's so soon!) and I just wanted to let you know that your posts make me even more excited about tumbling club (and I was already pretty excited so that's saying something). I was hoping I could go to SANCA for winter term this year, especially since I live near Seattle. In this post you mentioned something about being accepted to the program...could you shed some light on this? Is it likely/unlikely to be accepted as a first-year? Especially if said first-year has an extensive background in gymnastics?
Thanks!
--Molly

Molly,
Move-in IS so soon! Can't wait can't wait can't wait! I'm glad you're excited and yes, first-years can totally go to SANCA. If you come to tumbling first semester, we will let you know when SANCA passes their application forms along to us, and then you can fill one out and hope they take you - which there is a good chance they will do, since all they're looking for are healthy, circus-curious people who know what they're getting themselves into, will be safe, and will love learning circus arts.
See you soon!

Ida,
Thank you for the information! Eek! So stoked.

I'm so excited to go to SANCA myself in just a few months!! Hopefully I'll acquire half the flying skills to match your beastly basing skills :)