I've just had one of the most thrilling weekends of my life. And no, it's not because Ajax, my Amsterdam soccer team, won the Dutch league on Sunday (although that was pretty cool). What made the weekend so thrilling was something else: as chair of the board of an educational non-profit I got to hand a $100,000 Human Rights Award to the Spanish Judge Baltasar Garzón.

Garzón is a larger-than-life legend in the world of human rights and international law. It was he who, in 1998, got the former Chilean dictator Augusto Pinochet arrested and almost extradited to Spain to stand trial. (Garzón's effort helped jump-start an unprecedented persecution of Pinochet in Chile itself, led by Judge Juan Guzmán Tapia, who incidentally holds an honorary doctorate from Oberlin.)

Since then, Garzón's groundbreaking interpretation of the principle of universal jurisdiction has made life a whole lot harder for all kinds of important people with blood on their hands or stains on their conscience: politicians, heads of state, policy makers, and terrorists. Garzón himself has indicted Argentine military leaders, Osama bin Laden, but also the "Bush six": the intellectual and political architects of the torture policies at Guantánamo. (For more, see this piece in The Nation that my Oberlin colleague Geoff Pingree and I wrote last year).

Because of Garzón's pioneering work in international law and transitional justice, we thought he was the perfect recipient for this new prize, the ALBA/Puffin Award for Human Rights Activism. (David Cole agreed.) ALBA is short for the Abraham Lincoln Brigade Archives: an educational non-profit that keeps alive the legacy of the 2,800 Americans who fought against fascism in the Spanish Civil War. The Puffin Foundation has been supporting progressive causes for decades. As chair of ALBA, I get to do a lot of cool things--but nothing so far beats getting to hang with the judge for a couple of days.

The award ceremony Saturday in New York was terrific. First, Garzón was interviewed by George Washington Law Professor Jonathan Turley (who himself is a kind of American Garzón: he has insisted on a war crimes trial for members of the Bush administration, for instance). Then, there were speeches by Michael Ratner of the Center for Constitutional Rights, and Larry Cox of Amnesty International (Larry is the successor at AI-USA of William Schultz, an Obie grad). Finally Garzón himself gave a stirring address. 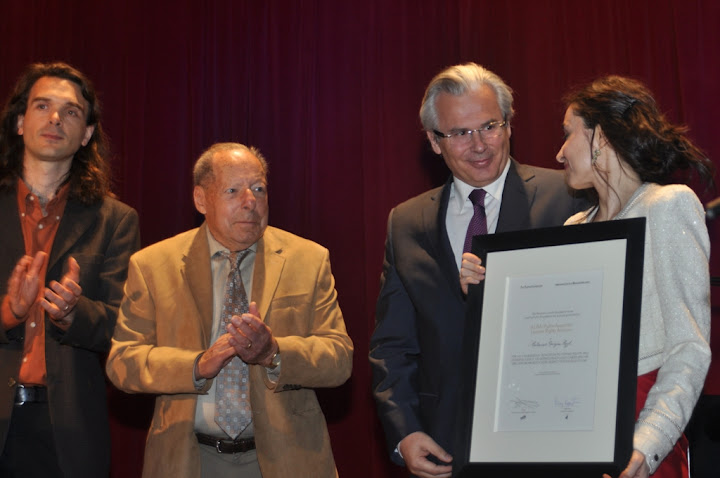 Garzón, as it turns out, is living one of the most difficult moments of his career: he has been suspended after trying to do in Spain itself what he did for Chile and Argentina: to investigate the crimes against humanity committed under the Franco dictatorship. "The real crimes in this case are the disappearances," the New York Times editorialized last year, "not Mr. Garzón's investigation. ... Spain needs an honest accounting of its troubled past, not prosecution of those who have the courage to demand it."