Six months ago I had it all figured out. For spring break, me and a group of six friends would fly out to California and spend a week in a minivan traversing the west coast from the Bay all the way up to Seattle, going on wine tours, seeing the sights, eating at nice restaurants, and crashing overnight with Oberlin students at every step along the way. The trip sounded perfect, combining three of my greatest interests: certifying my first journey to the west coast, reconnecting with long lost Obies who have since graduated, and living out a less pretentious version of the film Sideways. But in the usual indecisiveness that typifies most all of my grand schemes, it was the beginning of March and the road trip of a lifetime was looking more and more like California Dreamin'. Thankfully, there was something else looming on the horizon.

That little something was an organization called Immerse Yourself in Service, better known as IYS. Started by a group of Obies in 2006, IYS's mission is to mobilize Oberlin students to offer community service during academic breaks by participating in volunteer trips. In the past, it has focused a predominant amount of energy on New Orleans in the wake of Hurricane Katrina, but over this past spring break and others, the organization has branched out, sending students to Florida, Mississippi, Philadelphia, and Kentucky, to engage in all manner of service work. Though I had heard about IYS in the past, for one reason or another it never seemed feasible, but suddenly the prospect of all of it felt mighty enticing. No stranger to service at Oberlin, I am part of the Bonner Scholars Program, which means among other things that I do about 10 hours of community service a week. My service is focused primarily on education in the Oberlin community, split between tutoring 3rd-graders and acting as site coordinator for Prospect Elementary School (more on this in a forthcoming post).

But more than just that, IYS struck a particular chord with me precisely because it was service outside of Oberlin. It brought back memories of my first real outlet into service work at college, coming as a result of a volunteer opportunity in New Orleans during Winter Term of 2006. I came down for the first two weeks with a wonderful group of 16 then-strangers from Oberlin, and over the next two, lived and work alongside four of my friends who had also driven down to volunteer. Both halves functioned entirely differently save for the actual work we were doing (gutting houses and the like), but it was the first that really sent my world for a spin. At the start, I was extremely nervous about the prospect of traveling to a new place with people I didn't know and doing work that I wasn't particularly familiar with. But as it turned out, the whole experience was fantastic (you can read more about it in a post on my previous blog), and I owe a great debt to the trip for not only allowing me to forge a number of life-long friendships but also for jump-starting my passion for community service.

The only question that remained in my mind come March of this year was whether something that idyllic could actually happen again given similar circumstances. I decided to take the risk and apply to IYS, putting down New Orleans as my first choice because a huge part of me so desperately wanted (and still wants) the chance to go back. But after being couched with third choice, Kentucky, I was more than a little disappointed, and half-heartedly figured I'd be better off scrapping everything and bumming around at home over break instead. It took some convincing, but eventually I counted myself onboard. If someone told me six months ago that for spring break of my senior year I would be living on a farm in rural Kentucky for nine days with scarcely any internet or phone and sharing a room with eleven people I had never met before, I would have laughed in their face. All I can say is what a difference a week makes.

The trip to Kentucky was absolutely incredible, exceeding my expectations in every single way. It took about 7 hours to drive down from Oberlin in two seven-passenger minivans, including a big stop along the way for sightseeing and dinner at a kitschy café in Lexington quite reminiscent of Oberlin's hippie roots. The drive gave us all a chance to get a little better acquainted with our fellow van-mates with games like "making small talk," "sharing our life stories," and "sleeping" framing the bulk of the ride. When we finally got to Harrodsburg, about an hour west of Lexington where we were to spend our week, we were greeted by Don Boklage, the founder of Open Ground, who guided us in a miniature constellation lesson with his son Jake before taking us on a chilly evening tour of the site. Open Ground is a place that truly defies description. At once, it is a community center that offers educational programming to disenfranchised groups, a farm dedicated to upholding environmental justice, and a hub of art and creativity that stands as a cultural beacon to the hundred acres of central Kentucky that it occupies. It would also be our collective home for the next nine days.

Open Gound is made up of a few primary areas: the staff house where Don and his son live, the "Bus Barn" which functions as both a studio and gallery space, an extensively devised two-structure tool shed, a chicken coop, lots of garden plots for planting, fruit arbors, a (currently vacant) goat pen, and a central building that serves as both a dining area and a dormitory for visiting guests and volunteer groups. Appropriately named Ibu, mother in Indonesian, the central building became a comfortable common area where we spent the majority of our time together, whether that was eating, sleeping, or unwinding after a day of work.

But perhaps what was most startling about Open Ground was Don himself, the only full-time resident and staffer, who has spent the last twenty years building Open Ground from the ground up. Unassuming, gentle, intelligent, and uproarious all rolled-into-one, Don is the kind of person whose integrity and work ethic engender respect and his speech doesn't fail to captivate. On that first night he told us a lot about the mission of the place and the kinds of work we would be expected to do. We learned about some of the past events that Open Ground has sponsored, everything from Civil Rights history tours in the South, to free workshops for youth inflicted with HIV, Indigenous and Native American folk arts and culture classes, and other programming that serve marginalized peoples: the deaf, the disabled, sexual and gendered others, etc. It is no wonder that Oberlin students have been volunteering with the organization as early as 2004, though we were the first larger group from Oberlin to ever dedicate time. 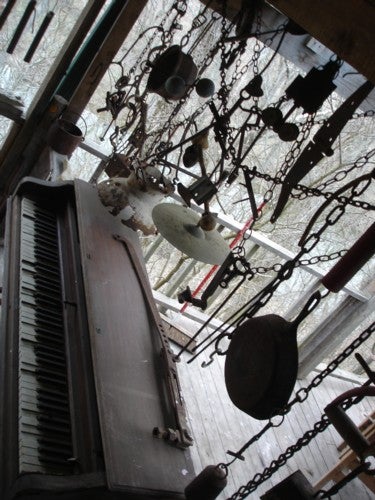 One of the many examples of the startling array of arts projects undertaken at Open Ground.

Our work at Open Ground began right away, and our schedule took on a loose routine that was oddly refreshing. Each day started at 8:30 to the soothing classical nodes of Hannah Gordon's cell phone alarm clock, one of our two group leaders. The other, Katie Thompson, slept directly adjacent, whose bed along with mine made up a three-cot faction that filled the left side of the room. The dormitory was made up of thirteen raised cots filed neatly in a rectangular shape on the second floor of Ibu. All thirteen of us slept there for at least part of the week, as there were also two private rooms on the first floor cattycorner to the kitchen where a handful of the group chose to slumber. There was one light switch, precious few outlets for cell phone chargers, and more spare linens and pillows than you could shake a stick at. Which was great, because Ibu got a little chilly at night--insulation in the house was spotty, and it was not uncommon to wake up to icy breath and frostbitten limbs.

Downstairs, we indulged in breakfast, often consisting of some combination of eggs, meat, oats, fruit, and bread, certainly a welcome change from the granola bar and water I fill up with during my 9am class at Oberlin. Open Ground was nice enough to have rotating cooks for the week of our visit--Don pulled a lot of the legwork initially, only to be replaced by Gwen, Tom, and finally, Marshall by week's end. Breakfast was always done by one of the staff, save for the few of us who got up early enough to lend a hand, but we all willingly took part in making lunch and dinner. The whole collective dining experience was like an Oberlin co-op on crack. There was the same zeal and enthusiasm for helping out, only with more gumption--here there was no work chart to sign up to cook and clean, but instead, people simply pitched in when they wanted or felt obligated to do so. There were certainly the regulars--Mary, who sometimes stopped work early so she could bake bread for the group, Peter who enjoyed assisting with the prep work, and Kelsey who was notorious for washing dishes--but everyone had the chance to take part in the meals. 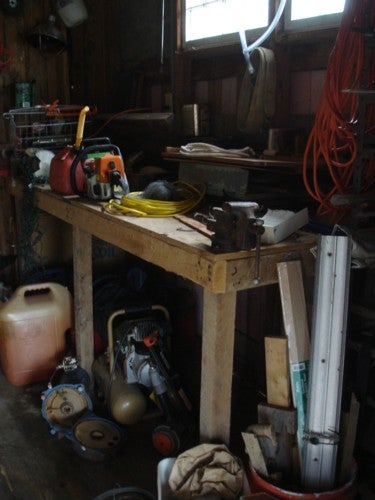 The tool shed where we borrowed most of our supplies.

Not to mention that the food was amazing. There was always enough to go around and the variety was overwhelming. Coming from a co-op where meat is not often served and cooks tend to follow a loosely prescribed food group distribution, my stomach had a veritable field day, chomping on everything from venison to Asian stir-fry to banana pudding. Early on in the week I made the mistake of eating a few more cold-cut sandwiches than average and earned a reputation for my staggering intake of food, one that I lamented to uphold. But hard work is often to blame for a big appetite, and in between meals and kitchen clean-up, we did just that. Everyone took part in a number of different projects over the week, including replanting strawberry bushes, uprooting garden beds, transplanting apple trees, repairing the goat fence, collecting eggs from the coop, shucking peas, painting various building roofs, caulking the tool shed, chipping and repainting a cabinet, and doing a lot of domestic cleaning and organizing housework.

(More on work, pottery, the inaugural Open Ground Talent Show, a trip to Shaker Village, and the shocking twist you never saw coming in Part II of this post).