Sweet freedom! This past add/drop period, I realized that I’d completed all of the required courses for my major (Comparative American Studies) and my minor (Gender, Sexuality, and Feminist Studies) save for my capstone in the spring. That basically meant I had four free slots to do whatever I wanted with.

As a Comparative American Studies major, I’ve gotten used to taking classes across many different departments. I’m part of a pretty interdisciplinary field, and I’ve been excited by classes across Environmental Studies, History, English, Politics, and more. I also love making art in many different disciplines - I’m a trombonist, and a poet, and even got into cartooning through my Graphic Anthropology class last spring. I’ve always wanted to try out new materials and forms for my practice, but most art classes actually don’t count for CAS credit. So this fall, without the constraints of major requirements or general college requirements, was the perfect opportunity for me to try something new.

I ended up enrolling in Intro to Video Production, Speculative Fiction, and Hurricane Katrina & Black Freedom Struggle. Those three classes were set for the full semester and were four credits each. Because I knew I would be planning OSLAM’s Grand Slam, our biggest (and most time-consuming) event of the semester, I opted to take two half courses to fill the rest of my schedule. I joined an Exco with Live From Studio B, WOBC - Oberlin’s awesome radio and video program, and also got credit for teaching first-years through our wonderful PAL program (more about that from Ruth in her recent post!).

I finished the semester with some of the most creative final projects I’ve ever been able to do! Here’s a taste of what I came up with for each class.

I made a personal narrative film!!! This is what I’m most proud of from the last semester. I spent probably over 60 hours in the Apollo (the production home of the Cinema Studies department, located right above the Apollo movie theater!) working on this - from animation to sound editing to the re-figuring every clip, I was able to make something I’m really proud of. It’s a piece about the connections between climate change and how we imagine the scale of Earth’s time, and fatness and how we imagine the scale of body-time (which supposedly arcs linearly towards thinness). I wanted to make a piece that sat at the meeting point of the two mythic futures: where a fat person’s life “begins” (via weight loss), and where the earth’s life “ends” due to indulgence-based climate change. I wanted to challenge my viewer to think deeper about what it means to be fully embodied on a “dying” planet. A lot of the time, I think about the concept of wasted time, and if there’s a way to calculate how much living-time is wasted by fearing fat and death. Instead, what if we let go of our bodies? What if we made room for our expansion and embraced it, or looked at it with curiosity, richness, and respect? Maybe with that reclamation of time, we’d have more minutes to think about relationship to Earth, and the abuse that exists between us and her, how to address that trauma and move towards embracing our planet with curiosity, richness, and respect too. Anyhow, that’s just a little bit of what I was thinking about as I made this movie. If you want to watch it, please let me know what you think by commenting here, or emailing me at  jwillia2@oberlin.edu!

I made a whole portfolio of short stories! This was such a cool class - we read everything from Indigenous Sci-Fi and Afrofuturism to super experimental fiction, like a story written in the form of a bank statement. The story I spent the most time writing took place in San Francisco, my home, but in the future and during a new climate crisis that’s forced the main characters underwater. In the story, the protagonist has limited access to oxygen, and so there is a limit to how many words she can speak per day. Meanwhile, the wealthy in the underwater caves can speak as much as they want! I was working on this at the same time as my narrative film, and it was really interesting to think about climate change and ideas of home and see how they manifested so differently in these disparate forms. I’m really proud of how much work I put in for this portfolio — I take the revision process really seriously, and spent a ton of time editing stories I’d written months earlier. Spec Fic was my first time writing fiction rather than poetry, and I definitely had a steep learning curve. A common critique I faced during workshop was that my stories read like “extremely long poems”...haha! In any case, I was challenged in a quite productive way in this class. Plus, I LOVED the professor, Abbey Chung, and they even asked me to TA for them next semester! Very, very excited for that. It was also really fun to be in my first class with my friend Amy, my coworker at the Cat and fellow officer from OSLAM. We both like to write very image-heavy paragraphs, so getting to read and edit each other’s work in class was super fun! It’s also just a nice feeling to get to see your friend produce work in new contexts, since I’ve only ever interacted with Amy inside our student orgs and as friends. She is amazing and has an impressive work ethic in all settings, and I learned so much from being in class with her!

This class was easily one of my favorite courses at Oberlin. I always left Ms. B.’s discussions feeling ready for a revolution!! I had a really good experience working with a group of four other students on a project about disaster capitalism and education reform in New Orleans post-Hurricane Katrina. The term ‘disaster capitalism’ refers to how private entities profit off of, and exacerbate the devastations of, natural disasters. Our research focused on how the public school system in New Orleans was basically dismantled and re-formed after the hurricane. After the storm, New Orleans' public schools were mostly transformed into highly segregated charter schools, and teachers' unions collapsed with this shift. My particular section of the project looked at the ways that non-profit organizations who hire contract teachers for short-term positions end up harming students’ social, emotional, and educational outcomes. I learned about how many people in power look at hurricanes as “opportunities” to re-form cities in ways that exploit the most vulnerable populations in those cities — in the case of Hurricane Katrina, this meant that low-income Black residents in the city were targeted from all sides, and faced simultaneous environmental, classist, and racist violence.

The class was as much about resistance as it was oppression, though — Black freedom struggle was central to our studies! I was equally challenged and invigorated by all the readings and media we engaged with in the class, especially a guest lecture from the New Orleanian historian and activist Leon Waters. In the lecture, he urged us to “Take every opportunity you can to strike a blow against injustice," and that’s what’s stuck with me most from the semester. I loved this class!

Live From Studio B!

In this exco, I learned about sound mixing, and how to record a successful audio session for the radio! It was a super fun and sweet environment, and it was great to learn from my peers. My slam team, OSLAM, was even able to do a Sunday session on the show! I’ll post the youtube links to our performances when they’re up. In the meantime, you can check out the Studio B youtube channel for some of their wonderful past acts. I recommend Mal Devisa and Mourning [A] BLKStar’s sessions as a good starting place!

Initially, I was also looking forward to a half-module course in Critical Fat Studies, which is a subject near and dear to my heart. The class was set to be taught by Elliot Director from the Multicultural Resource Center. Unfortunately, Elliot ended up unable to teach the course, but we still met a few times unofficially and I was able to meet some more fat folks at Oberlin, which felt meaningful and important. A big part of the reason I wanted to take the class was to build community with other fat people at Oberlin, and I feel so grateful I was still able to do that!

I love that Obies are so passionate about what we study here that we’ll meet and read and write about what we care about, even without getting class credit for it. At the end of the semester, Elliot was able to set up a group Skype call with Dr. Esther D. Rothblum - one of the heroes of the movement for Fat Liberation, and one of the founding scholars of Fat Studies! She was super kind, and answered a bunch of questions I had about the field and what it takes to get published in a subject that many find controversial or illegitimate. Dr. Rothblum was very encouraging of my interest in the field, even as she was honest about the barriers she’s faced in her scholarship and career. It was a pretty special opportunity to connect with someone I’d looked up to for a long time, and all of this happened despite my class not even officially meeting! (Thank you Elliot, and we’ll miss you!! The Multicultural Resource Center is amazing and necessary - it’s facing huge budget cuts right now, but it’s a space students both need and treasure, and we’re fighting for its future as I write this post. Elliot has since left the MRC and we will really miss him!)

Phew! That was a long post. Thanks for reading if you made it all the way through :) This was a really packed semester, and I’m so happy my senior year has gotten off to such a great start. I can’t believe my time at Oberlin is closing so quickly, because there’s still so much I want to do!

Stay tuned for an entry about my final-semester bucket list...there’s lots I’m cooking up.

For now, I’m gonna take a nap — winter term is a great time to reflect, but *most importantly*, snooze. TTYL! 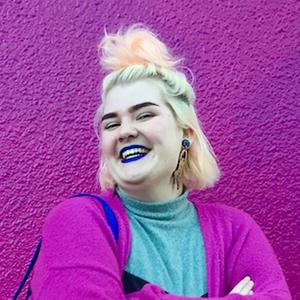