From all the blogging topics I’ve covered, this is probably my favorite one—Birthdays!!! Specifically, birthday memories, and no, not my own, but David Bowlin’s birthdays. David Bowlin is an Oberlin professor of violin, and everyone in our studio loves him very much. There is no better way to exemplify this than by describing his birthday parties. My two best friends came into my life when I joined the Bowlin Party Planning Committee (PPC) during my first year. Founded by the lovely Christine Showalter, the party planning committee was essentially an official-sounding excuse to get together and talk about David Bowlin’s upcoming birthday, regardless of the time of year.

Starting in chronological order, this photo was taken the year of his 38th birthday, which was in fact before my time at Oberlin. However, this picture captures our unquenchable studio spirit so beautifully, I felt inclined to include it. 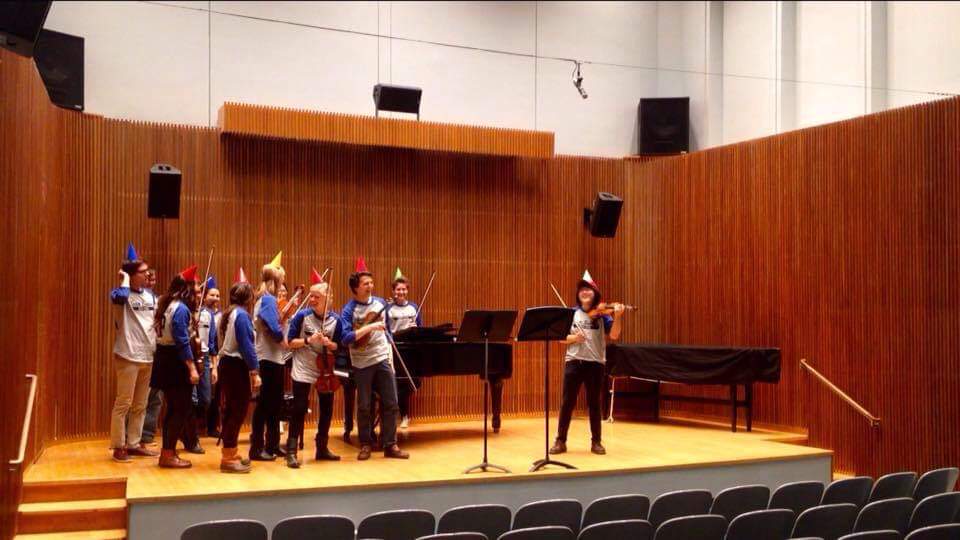 My first year was the year of his 39th birthday. Christine organized a magnificent chamber music arrangement of Happy Birthday which we rehearsed and performed at the tail end of our studio class (a weekly peer performance class). Unfortunately, Darrett Atkins' cello studio class was scheduled adjacent to ours, which meant we had to vacate Kulas midway through the performance. However, a minor disruption like that doesn't halt Team Bowlin birthday celebrations. We continued with part two in the lounge, where helpers held the music up for us seated on their knees and a crowd started gathering around us. If you’re wondering whether there is YouTube video coverage, you’re in luck. The second part in the lounge can be found here.

As soon as his 39th birthday came to a close we began planning his 40th. A double-digit birthday, the beginning of a new decade, yes! This was going to be huge, and our birthday meetings had to start early as a result. Christine started researching Professor Bowlin's favorite birthday memories, and all of us embarked on the quest of finding out his favorite type of cake. The cake topic took a few twists and turns. Some people reported findings of vanilla cake, chocolate cake, pies, and chocolate lava cake. Our first instinct was to make all of them, but then we remembered homework and practicing. Studio friend Camille ended up making a delicious chocolate cake. Meanwhile Christine was making progress with favorite birthday memories. She discovered that a memorable birthday experience of Professor Bowlin’s included a birthday party at a Chicago-based pizza place that specialized in beer-crust pizza. We looked into having some shipped but decided shipping pizza from Chicago for lots of money didn’t make sense. Aahhh (sigh) the barriers we face, so instead we decided to get our hands dirty and make it ourselves. Thankfully, I had some experience with yeast, and Christine was over 21. Staying true to our naturally rebellious souls, we bought a 6-pack of Heineken to make pizza dough. As the date started to approach, we began testing the dough-making process. As beer tends to be cold, we needed a way to warm it up and decided to stick it in the toaster oven to create a hospitable temperature for the yeast. Needless to say, the pizza turned out great, and everyone was happy with the results.

But of course, there is more. Meanwhile, studio friend Adam Jeffereys and I began writing a studio children’s book. A hidden tidbit of knowledge is that Professor Bowlin has been an avid Star Trek fan throughout his life. We decided to write a violin-studio Star Trek episode in children’s book format. What started as a children’s book soon grew to a complex 30-minute experience of comedy, ethics, principle, and loyalty. It begins with Dr. Bowlin and Lieutenant Commander Cho, who fly on the spaceship Guarneri to the planet of Oberlirium, where they are investigating former rouge space agent and villain Paganonious. During their search, Dr. Bowlin and Lieutenant Commander Cho discover every member of our studio in the form of talking trees, alumni mutineers, acclaimed scientists, and much more. Adam took the added liberty of making photoshopped Star Trek illustrations with all of our faces on the corresponding characters. We sent the manuscript and illustrations away for print at Walmart and titled it mysteriously The 24. The book is available for viewings in Professor Bowlin’s studio; feel free to stop in and take a peek next year. It would fill my graduating senior heart with joy to know future musicians will be reading it.

And then, there’s more. Christine embarked on a project collecting 40 notes of appreciation from students, former students, and colleagues, combined in an advent-calendar-like box of 40 little gifts. These gifts were, for example, two tea bags, an orange, etc. At almost every studio class we’d ask what his gift had been that day. It was a lot of fun. Plus, with 40 gifts we got to ask that question over the span of more than five weeks:)

Finally, moving forward, we’ve reached his 41st birthday. This was the first birthday where Christine had graduated, so naturally there were some administrative hiccups in the PPC. We couldn’t match the feat we had accomplished for his 40th birthday, but still wanted his 41st to be special. Imagining the process without Christine seemed unthinkable, so we made her an honorary consultant. Good friend and co-managing member of the PPC Sabine and I began planning the birthday cake. Since we’d had that chocolate/vanilla debate leading up to his 40th, we decided on a chocolate vanilla marble cake, served with both chocolate and vanilla whipped cream.

As our studio present, we decided to bring Christine in from Michigan and hide her in a giant box. The box had to be extra big, since Christine wanted to be wearing a party hat and butterfly wings, but we figured it out. There was even room for her butterfly wand. Credits must be given to UPS moving boxes that were stashed in my closet.

The 42nd year was not as exciting as the previous ones. Christine couldn’t drive up from Michigan, I was caught up in senior stress, and everyone was busy. However, I started researching birthday cakes in July because I wanted this to be my epitome of a birthday cake. While I was in Germany over the summer, I found a heart-shaped springform pan which I brought back with me to Oberlin. In this pan, I made a coconut milk rice mango torte, because mangos are among Professor Bowlin’s favorite fruits. It was very delicious; I’d highly recommend.

It makes me sad to think this was my last year of celebrating Professor Bowlin's birthday in midst of our studio, but my heart is filled with hope that his current and future students will carry this tradition into the future. Let’s hear three cheers for birthdays! 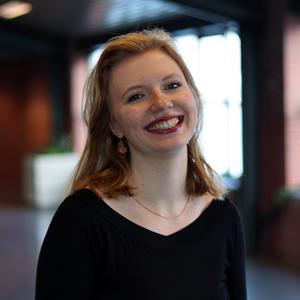