In 'goodbye Oberlin' posts, people often make lists. They are usually lists of lessons, sometimes things that people wish they had done earlier or things that made the biggest difference in their careers. Lists are cool, and I've read a number of them recently. But I don't particularly like them. I think me and my fellow graduates are all nervous, and when you get a little scared you seek out information, especially if you're a brainy person like Oberlin seniors tend to be. When life-tips are organized into a big trucking list, it makes you think that the things in the list are more important. 'Well shoot, this thing made the list! Made it to list status, better write that thing down and circle it.'

Information makes us a little better at ease. Of all the pieces of advice that I've heard, some of them did calm my nerves, but not a lot of them will actually help me, so I don't know that they should make me feel better. Hearing that 'it's a journey, not a race,' over and over again doesn't help me much next year. I do appreciate it, but I don't think I learn big picture things until I have an experience that teaches them to me. So I'm not going to make a list. I will let you know some things I've learned, but I don't even know if they'll help you much, because they're pretty personal. I like stories much more than I like lists, so here are four of them in two installments.

I had to write a paper for Biology 102. The assignment was to pick an organism and write a report about it, considering specific adaptations they have to their environments. I wrote my paper about the narwhal, and was pretty happy with what I turned in. I know I'm a decent writer (good enough for you fools to be reading my stuff, yeah?) and I had done a lot of research on narwhals, getting deep enough that I could explain the scientific controversies over what their 'horn' (actually an overgrown tooth) is used for and why they swim upside-down on the bottom of the sea. I got my first try back and got something like a B- on the paper. It wasn't what I wanted or expected, but we had another chance at it if we wanted to try to improve our grade. 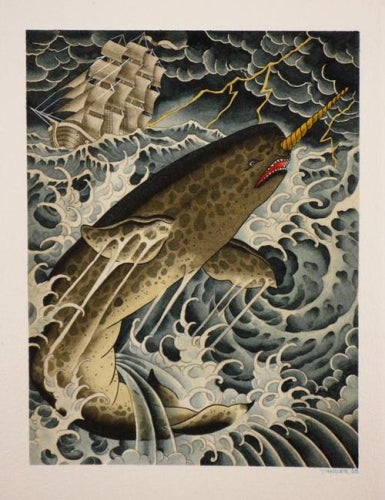 The terrible sea monster known as the narwhal. Turns out their tusks are pretty sensitive, and it probably would feel like sticking a toothpick into a cavity if they ever broke one, so they're not really into goring things.

I went to office hours and spoke with Professor Garvin, who still says 'Hi' to me in the hallway though I haven't had a class with her in three years, and took another running jump at the paper. Office hours are great, and you should go to them. My next grade was a B+. Still not what I wanted. I wasn't just obsessed about getting perfect grades, I wanted to understand the assignment well and be able to carry it out successfully.

I repeated the process one more time, and finally ended up with an A after some major revisions. A Biology professor taking three office hour sessions to help a student with a seven-page writing assignment is a little on the nose as far as the idea of a liberal arts education integrating different skillsets. Maybe Prof. Garvin was just making a point to Slighty Joe Young. The whole thing was a labor, as childbirth is labor (moms out there will certainly agree with me), but I sure did learn a lot. Here's a list of all the things I learned:

Junior year I started running consistently again. I had been injured intermittently for my first two years in college (there are about 20 meets every year, and I've been healthy and fit enough to run in 6 total track meets in college), but I strung together a few months of healthy running the summer and fall of 2010. For a while, all this meant was that I could practice every day and run meets every weekend, but not that I was running lights-out fast. Starting in October, at the All-Ohio meet, I started going a little faster. The meet started out exceptionally slow for me, and I started going even slower after the first mile. I had nothing to lose, so I picked up the pace and half-sprinted for the next thirty seconds. I figured either this would tire me out and I was going to have a crappy race (I was already having a crappy race, if you'll recall), or it would wake my legs and lungs up a bit, and maybe I could salvage something out of this trash-pile of a race. I felt good after the thirty seconds, so I sort of coasted on the momentum of my sprint. I was going faster than I thought I could maintain for 4 more miles, but again, I had little to lose by actually running fast during a race. 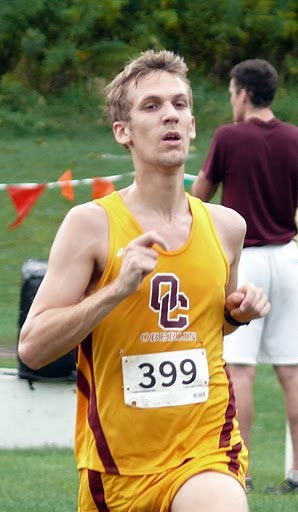 After a while, I saw a teammate of mine, Justin Warner (of Surprise Salad fame), and caught up to him. Coach saw us, and Justin usually being much faster than me, said something like "Alright Joe, just stick with Justin from here on out." I did that for a minute, then sped up a little, and Justin fell behind. From then on out, I ran each mile faster than the one before. A quarter-mile before the finish, I caught sight of DJ, a second-year who usually finished far ahead of me, and decided to go after him. 75 meters from the finish, I passed him in the 'chute,' the flag-lined corridor to the finish line. I was spent and amazed at myself when the race ended. I think I ended up as the 15th-fastest Oberlin finisher that day, which was better than I had thought I would be.

Next week, at Oberlin's own Inter-Regional Rumble, I started the race slowly (not as slowly as before) and sped up again, finishing 12th on the team. That was good enough to guarantee me a spot on the Conference team, my first foray into the postseason. To move on from Conferences, I would have to be the 8th Oberlin finisher. I figured my season would be over after that race, but I did it. I reeled in my teammates one after another during the 8-kilometer race, and lunged across the finish line with another great time. I surprised my family every time I would call home after a race, telling them how I ran another personal best in the race and moved up the line on the team. Finally, we raced at Regionals in Holland, Michigan, and although we failed to move on to Nationals from that meet, I ran the fastest time I had ever run an 8k after a blazing first mile that I thought would cook my goose for the rest of the race. The things I learned that season are almost to numerous to enumerate, but maybe just a quick bullet list--

Now, I don't have any major problem with lists, and actually don't have a great reason not to make one, except a feeling that I wanted to show you how I learned from Oberlin instead of what I learned. Hey, I've even got friends who are on blacklists. So if you should run into any lists, especially ones featured on this Oberlin blog site, give them a chance. I'll be back in a minute for the last bit.