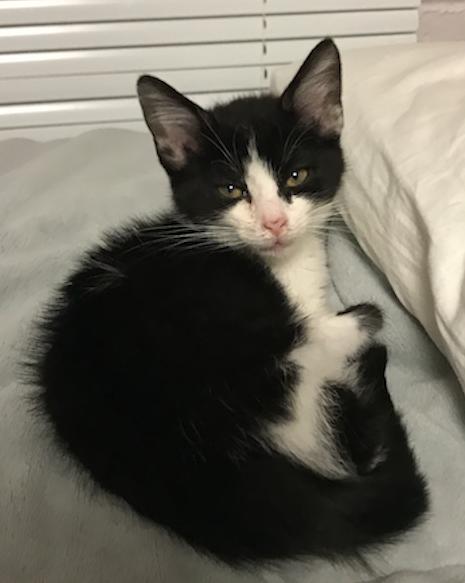 This is Isuzu, he is a 4-month-old foster kitten originally found in the engine of a truck in Oberlin. He has been my foster kitten for the past two months, and the two of us couldn't be happier together. He's a little under 3 pounds and sleeps at the end of my bed, often interrupting my classes, and is generally a great companion to have during this time of such uncertainty.

I started my process of getting an Emotional Support Animal (ESA) soon after the semester began. I started seeing a new psychologist, who I asked about the process for getting an emotional support animal. I knew of people on campus with cats and dogs in their rooms, but I was not really sure of the process to get approval to have an animal. I also wasn't sure if there was going to be any way I could get one, as I didn't think it was fair to an animal to make it fly backward and forward between Australia and the United States.

I discovered it is actually a pretty straightforward process, and there is an organisation in Oberlin that allows students to foster cats. Community Action To Save Strays (CATSS) is a local organisation that is a shelter for strays found in the greater Oberlin area. I got a letter from my psychologist detailing to the college her belief that an ESA was a good companion who would help me with my anxiety and depression.

My first step was to submit this documentation to the college, and they approved me to have an ESA. Once I had done this, I submitted my foster application to CATSS. They called me and spoke to me to make sure I knew what fostering entailed. Once I was approved to foster, I was told that a 2-month-old kitten, Isuzu, at Ginko was escaping the play area and, as a result, needed a foster home.

The next part of the process was the part that took the longest. I had to fill out a bunch of paperwork with the disability services office, registering my cat and making sure I had a plan for his care. The college really made sure that he would be looked after if something was to happen to me, having me submit a plan for an emergency situation.

I spoke to a teammate on the swim team who agreed to be his 'back up parent' if he needed someone to look after him on short notice. The main issue I had was I needed insurance, to make sure if Isuzu did damage to either my room or someone else, I would not be liable for the damage.

This took some digging, as I am insured as a foster parent but finding the part of the document that said that was difficult. I got the correct documentation and I was able to bring him home soon after. I have really enjoyed having him in my room, and even though I know it is going to be hard to say goodbye when he finally gets adopted, I will know he is going to a better home than I could give him in my dorm room.

He always makes me smile with his kitten-like antics and his constant energy. He is also often the highlight of lectures for many of the people in my classes. I am so grateful for his companionship, and I am looking forward to both his comfort and the comfort of any future foster cats I have.