I am writing this at 6:30 PM on November 6th. I am going to write a blog about Halloween sometime soon, or it won't happen, and I want it to happen. But first, a word about today.

I am very excited. This is my first opportunity to vote in a presidential election. I voted early, along with many other Oberlin students. My busload got our pictures taken and an interview done by the Elyria paper!

I am writing this at 4:40 November 7th, after less than five hours of sleep. I don't think this blog will have room to be about Halloween. Last night was an education: when Oberlin gets excited, it gets excited. There's an awful lot of energy here every day, but it's usually being directed in hundreds of different directions at once; when everyone is freaking out over the same thing, it's rather amazing.

I'm sorry I couldn't be reporting it in real time, but I got distracted from my writing last night by homework, friends, and election returns. Although I'd gone to watch the returns at Slow Train for a while, and then called a friend and talked about other races--like Puerto Rico voting to become a state--I found out when the election was called in a mini lounge in my door, during a Daily Show commercial break. (Someone wandered by a few minutes earlier to say Obama had won, but he didn't seem excited and didn't give a reference, so I figured it was his own estimate and not an professional "looking at these statistics, we are calling the election" kind of thing.) I checked Facebook at the commercial break, along with Nate Silver's blog, and saw from one of my friends that . . . well, see for yourself: 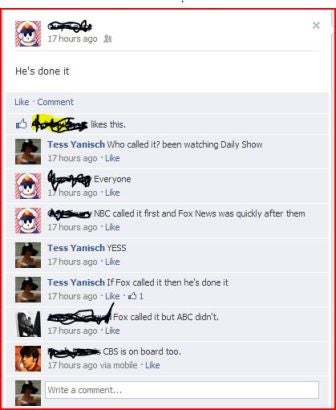 I scrambled around to the various websites I had open. NPR hadn't called anything yet. As the later Facebook responses (seen above) trickled in, the commercial break ended, so I decided to watch and see if there was any confirmation there.

Knowing something from text is not the same as hearing it out loud. The realization hit as Jon Stewart said "Barack Obama has retained control of the Presidency," and I screamed and ran around the hallway. I actually had the thrill of being the first one to relay the news to a large group of people: I stuck my head into Sci-Fi Lounge, where a large group of people were playing Cards Against Humanity. "Have you all heard the news, then?" I asked them, and received only eager looks. "They're calling the election for Obama."

I'm afraid the resulting screams might have woken some people on the next floor . . .

With a few of the people who were in the lounge, I tried to watch the rest of the Daily Show and the Colbert Report, as well as keep an eye out for Obama's acceptance speech, but it was too loud to watch anything and Romney hadn't yet conceded, having apparently failed to write anything but a victory speech. Then I checked Facebook again, to keep an eye on the chatter, and instead saw pictures of revelry in Tappan Square.

History lesson: in 2008, apparently everyone in Oberlin ran into the streets the minute Obama's victory was projected, congregating in Tappan Square, where they danced and banged spoons on pots and pans for hours. North, however, had obviously had no mass exodus--people were even continuing the game of cards--so I thought the prevailing emotion might be more relief than jubilation. The picture of someone dressed as Captain America being hoisted into the air by other Obies debunked that theory rather forcefully.

I relayed the news to the lounge at large and, with a few other people, grabbed a coat and ran outside. The night was clear and cold, the stars bright, and every now and then the sounds of celebration could be heard from some open window.

We could hear the sounds of jubilation in Tappan Square from half a block away: people cheering, laughing, clapping. There were drums competing with the sound of the Finney bells to break the crisp midnight air. People--I'm terrible at judging numbers, but it must have been well over a hundred--were clustered in the center of the square in a giant knot, hugging, dancing, hi-fiving, asking other people about state issues they cared about (gay marriage and marijuana legalization, mostly). Captain America seemed to be gone, but instead two people were holding aloft a life-sized cardboard cutout of Obama in superhero gear. I'd seen it earlier that day, once in the campaign headquarters when I went to be assigned to a canvassing squad and again at dinner, when campaign coordinators had brought it into Stevenson to remind people to vote. Now it crowd-surfed through the orange light, buoyed up by crazy excitement, students photographing it from every angle. There were a few people in trees looking down on the festivities. I circulated through the mob, recognizing many of the people there, hugging friends who suddenly appeared beside me and taking pictures. At one point, an older man--an anomaly; the crowd was almost entirely students--stepped on my toes and apologized. I just shook my head and grinned, barely stamping down the urge to quote from Harry Potter: "Don't be sorry, my dear sir, for nothing could upset me today!" 1 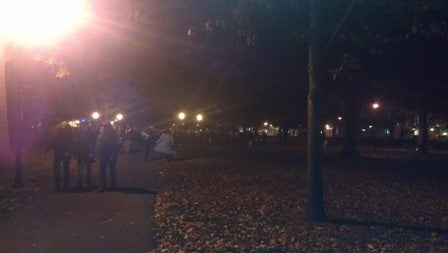 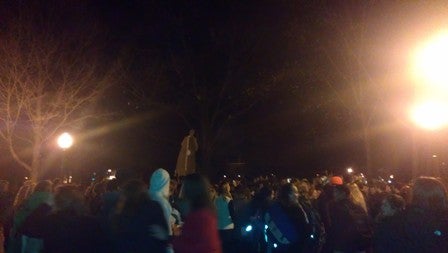 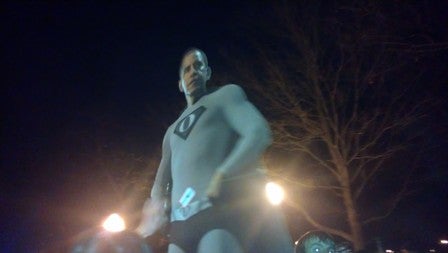 After I'd been there for a while--ten minutes? twenty? it's hard to say--the drums stopped, people hushed each other, and someone in the middle of the huddle shouted something indistinct that caused everyone to break out in renewed cheers. I waited until some of the nearer people had stopped hugging and shouted over the noise, "What'd he say?"

"Obama won Ohio by two thousand votes," the person I'd nabbed yelled back. "So about the same number as people at the college!"

(I don't hink those numbers are correct anymore, but remember, at this point votes were still being counted. States had been called, but exact margins of victory were not yet known.) 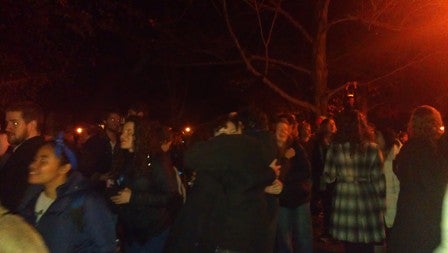 Shortly after this, people began to disperse. Some headed off toward the Feve or the 'Sco or their own dorms. The rest of the crowd, however, began to move, apparently spontaneously, to the northeast corner of the square where the giant bandstand is. I followed along in the midst of the crowd, marching along, a single drum now beating as the rest of us laughed, talked, and chanted ("Obama," "Ohio," and "Four more years" were recurring phrases). Surrounded by the excitement, relief, and pride of everyone around me, I could only feel euphoric. I think I was happier this time than when Obama won in 2008; this year, I was more involved, I knew more, I canvassed, I voted--I was able to be a part of it. This win was my win, in a tiny, tiny way. And more than that, it was everybody else's, too. I lifeguard at six in the morning on Tuesdays. One of Oberlin's polling places is in the gym. There were a few people waiting in the hallway already when I came in, even though the polls didn't open until 6:30, and volunteers were there setting up the electronic voting machines. I came skipping into the pool that morning, grinning and saying, "Yay, democracy!" And the canvassing I'd done that afternoon hadn't really been necessary, and that pleased me immensely: many people hadn't been home, but of those we talked to, three weren't registered and everyone else had either voted or were going to vote as soon as their spouse, brother, friend, etc. got off work and gave them a ride. People were on top of things, people cared, people acted, and I was ridiculously proud to be a part of it as I followed a giant snake of giddy Obies through Tappan Square in the dark. 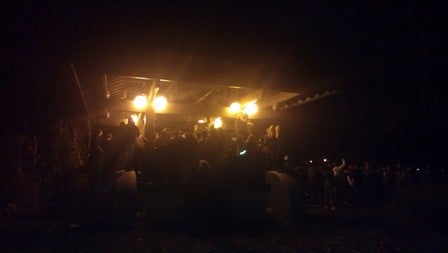 The crowd gained the bandstand; I was in the first half, so I managed to secure a spot along the railing at one edge. People were dancing all along the ramp leading up to one side, the edges of the stairs, and atop the giant concrete wheels alongside. (The bandstand is meant to "evoke the image of a carnival cart from India," according to Oberlin's website.) I ran into one of my friends, taking pictures on her very nice camera that I am sure put the grainy cell-phone ones on here to shame. Super-Obama reappeared, waved by an apparently tireless student with very strong arms, as the lone drummer continued to lay down a beat for the party. Someone went crowd-surfing. Another someone was, for no discernible reason, wearing a chicken suit. The chants and cheers went on. 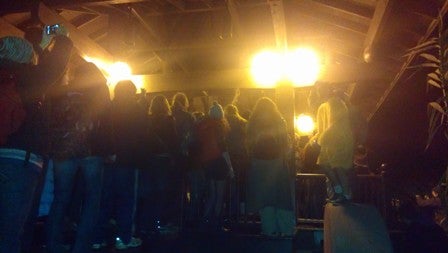 I left after a while, taking pictures as I went. The moon was yellow-gold and low in the sky. People were drifting in and out of the square. I, too, drifted, running into a few people I knew on my way back to North, where I called my mom (it was now after 1:00 in the morning, but that's only 10:00 at home) and tried to catch Obama's acceptance speech. Mom said it should be coming soon, because Romney had finally conceded, apparently having written his speech at the last minute. I watched a live newsfeed for a while, but Obama did not appear. I went to wash my hair instead, because it smelled like smoke. (Several varieties of smoke, actually: gunpowder from the bright-pink firework that someone had let off near the bandstand, startling everyone; tobacco smoke from the car of the lady who'd driven us to go canvassing; and smoke from the Tappan Square festivities, most of which had probably come from substances now legal in Washington and Colorado.) I was at that glorious state in which I could probably have chosen to stay awake all night if I'd been careful, steering between celebrating so hard I'd get exhausted and letting myself get too relaxed and sleepy. Instead, I checked over a few last websites, bantered a bit more on Facebook, and went to bed.

In the morning, I woke to the sound of my alarm and the unexpected brightness of post-daylight-saving-time morning. My first sensation was one of extreme contentment, although it took me a few seconds--the amount of time to bridge the gap between dreamless sleep and conscious thought--to remember why. And then I smiled.

It's nice to be in Oberlin right now.

That was such an amazing night and your post definitely did it justice. I watched the CNN reporting in the Sco with 100-ish people and we all erupted as soon as CNN called the election for Obama. We sang the national anthem, cheered a lot, and then everyone poured out into Tappan in the very early stages of the celebration. I know this because when we got there, the cheering wasn't centered in Tappan, instead it was echoing all over campus. I am tempted to write my own post about it, but aside from my experience at the Sco, you really covered it all, from the chanting to the smoky hair smell.

Glad you liked it!