Co-ops: a true Obie experience. This weekend, I ate in a co-op for the first time since I’ve been on campus. Granted, I’ve only been here for 3 months, but that’s not the point. For anyone reading this that doesn’t know what a co-op is, it’s essentially another way for Obies who don’t eat through Campus Dining Services to get food on campus!

The food in co-ops is made by students, for fellow students. Though there are some responsibilities that come with it such as crew shifts (cleaning) or cook shifts (cooking), it’s an amazing way to make sure your dietary restrictions are met, to meet other people, and eat some great food.

There are several co-ops on campus run through Oberlin Student Cooperative Association, but this weekend I ate at Pyle Co-op based in Asia House! Saturday night we had a special fall meal that included baked vegetables, freshmade bread, pumpkin pie, apple cider, and more. The students in the co-op lay out the food on tables so everyone can serve themselves and include ingredient lists so those with allergies or dietary restrictions can be informed. The food at Pyle was amazing; I got to meet people and say hello to familiar faces while I was there.

Although I was pleasantly surprised when I ate with the Pyle Co-op, that doesn’t take from the fact that CDS provides great food and resources too. There are several places on campus that students can eat, as well as work, through CDS which is really convenient! I know people who have a work study through CDS at Stevenson Dining Hall (or Stevie) and eat in co-ops so they get to eat a free meal at Stevie while they’re working as well as eat in their co-op.

Though co-ops have a stronger sense of community than a dining hall, the convenience of eating at Stevie, Decafe, the Skybar, or Azariah’s is always appreciated. Students who eat in co-ops aren’t barred from eating at CDS facilities either which is nice. There’s definitely a back and forth between CDS and co-ops as students who eat in co-ops can bring guests and students who eat in CDS can “swipe in” friends if they have meal swipes left, so you’re given the chance to eat through both dining systems. Co-ops can be more affordable for some students and are a pretty unique thing to find at Oberlin, which is why I’m grateful to have friends that are part of them and are willing to bring me as a guest! 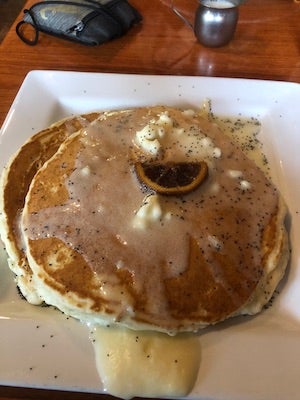 Eventually, some students want to celebrate a special occasion or can get tired of eating in the dining hall and need a change of scenery or type of food. Downtown Oberlin has several well-loved restaurants with some personal favorites including Aladdin’s, the Feve, and Blue Rooster Bakehouse.

My friends and I love to go to the Feve after work or on birthdays, and studying at Blue Rooster with some warm tea and a pastry just seems a little more enjoyable. If restaurants or cafes aren’t your thing, there’s a handful of fast food joints nearby, and most of them (as well as some restaurants) deliver through DoorDash. I’ve yet to try all of the restaurants or cafes nearby, so I’ll keep this blog updated with some new favorites as they come along!

Whether you’re going to Stevie for the night, joining some friends at their co-op, or ordering in some pizza, or even cooking for yourself, there’s enough selection around to be satisfied with your food choices every day in Oberlin, Ohio.