The current philosophy of the Border Patrol is "prevention through deterrence," which essentially means, "If we make crossing the border dangerous and dehumanizing enough, people will just stop trying." Here's what some down here think of this philosophy: 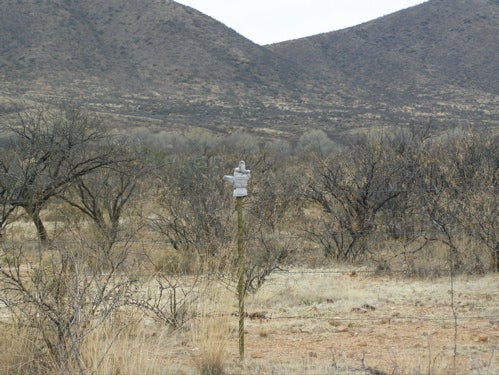 See, the thing is, the number of yearly border crossing deaths has doubled since 1995, when "prevention through deterrence" translated into the extreme border militarization we see today. Since people can no longer cross in safer, urban zones like Tijuana or Juarez/El Paso, they take to the desert, walking for days on end to reach a pick-up point, many perishing along the way. So the philosophy falls apart: because it does nothing to address the root causes of migration, people are crossing just as much if not more than before, but more are losing their lives to the cruel Sonoran desert.

I took off with Samaritans yesterday at 7 a.m., and we've gotten only 20 miles from Tucson when we find two men walking along the side of the highway. They said they'd been walking for five days, and gratefully accepted our food and water. But what they most needed was information. They were so disoriented in the desert landscape that they didn't know which way was North, and also didn't know about Operation Streamline, which would make life very unpleasant for them were they caught. They asked if we could give them a ride, just to the nearest gas station, and it was heartbreaking to have to tell them no. Though individual members have engaged in civil disobedience, Samaritans as an organization operates inside the law. We can give aid, but not a ride. In fact, two volunteers a few years ago were arrested and brought to trial for giving a dying migrant a ride to a hospital. It's all part of the current trend of characterizing humanitarian aid as a crime. Maybe soon the Department of Homeland Security will try to make giving food and water illegal too. One Samaritans volunteer is currently on trial for leaving jugs of water on a migrant trail. He's being charged with littering in a national wildlife reserve.

Anyways, another important lesson from the day is the arbitrariness of Border Patrol policy. If we come upon them detaining someone, and ask if we can give the migrant food and water, it's totally up to the individual agent. Some say sure, some say get out of here. We also noticed that there's a group mentality in the BP. When we found one agent, he was polite and answered all our questions, but when we walked up to a bunch of agents all surrounding this one man they had cuffed, they yelled at us to get back in our vehicle, all trying to out-macho each other. Talk about a system with no oversight!

Those were the highlights of the all-day patrol. In other news, the desert is just starting to bloom and is incredibly beautiful. But the rising temperatures are bad news for those crossing. I have to remind myself how lucky I am to always be able to climb back into my air-conditioned vehicle and speed away. 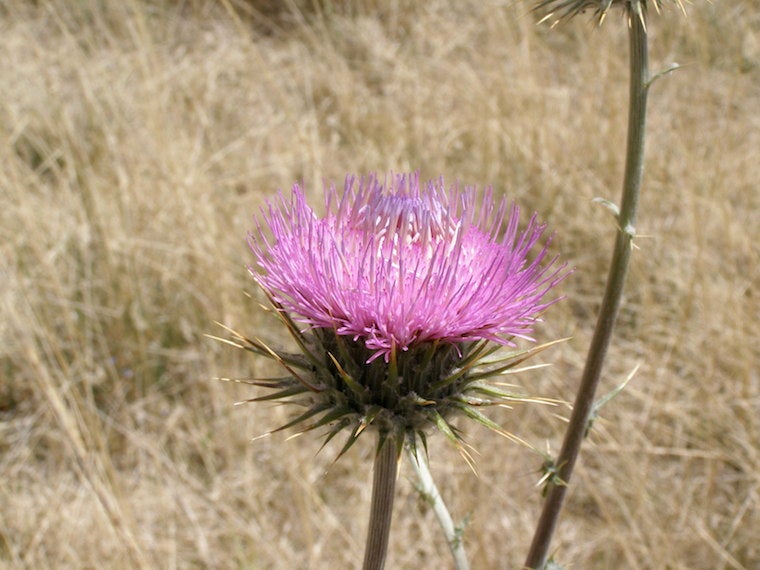 Laws have always bothered me. They take objectiveness to the point where it is completely wooden. This story may sound bizarre or irrelevant, but it illustrates the above idea...when I received my driver's license, the courthouse put a restriction on it because I was born without a left hand and they therefore assumed that I could not drive manual transmission. What bothered me was the law's refusal to give me a chance. Before I got my car, most of my family's vehicles had manual transmission. I never learned to drive stick. If I had learned, and I found that I could not...then go ahead, give me the restriction! But the law never looked beyond the surface. I can pick up objects, open doors, type, play the piano, and, I have found, handle a steering wheel with my (short) left arm...should I have showed the people at the courthouse a video of me on the piano? No, because offices are all lines and in and out and that is all. Fortunately my situation was not a life-and-death one, as the one in your story is. But it is a very similar thing happening. In your case, breaking the law might have preserved two lives...but the system would have given it dire, dire consequences. A society where people blindly do as the law tells them is a completely childish one. A person becomes an adult when he or she can choose one's own code, without having to regard whatever the books say. Is our society so immature, that we do not allow people to see humanity?

Oof, I am wary of taking America's immigration laws--which are wretched by almost any standard, as Alice's foreign correspondence has repeatedly shown--and extrapolating from them the notion that all laws should only be obeyed based on the subjective "judgment" of individuals. Laws are the foundation of civilization, the singular exponent of the idea of government as a social contract: I surrender some freedoms so that I may enjoy others. Without laws we are nothing.

That doesn't mean that we should be complacent in the face of cruel or arbitrary laws, but we have infrastructure in place for the creation, destruction, or alteration of laws, and we need to place faith in that infrastructure--Government, namely, though I'd include civil disobedience as part of this insofar as it makes an impact on lawmakers--in order to achieve progress. That the process is slow and laborious only ensures that just and fair laws are not stripped away during fleeting moments of clouded judgment. Imperfect? Yes. Broken? No.

(Alice, my apologies...I don't know what it is about your blog posts that always lead me off on weird tangents in the comments section. Probably at least partially due to my envy that you're out seeing this conflict first hand while I'm here continuing, like most of America, to have only a tenuous understanding of the myriad problems afflicting our immigration system.)

Will,
That our current laws are a product of a "social contract" is a pretty rosy view of things. Maybe I've become cynical from my experiences down here, but I would say that these laws are crafted by a few, powerful men to serve their own interests at the cost of lives and livelihoods.

Also, giving aid to a dying human being isn't, as you say, "subjective judgment," it's a firm moral belief. The Samaritans are the abolitionists of today. I bet people said exactly what you're saying about the Oberlin-Wellington rescue. Would you have wanted a "slow and laborious" process to end slavery or would you have wanted the Underground Railroad?

Finally, you say that under our system "just and fair laws are not stripped away during fleeting moments of clouded judgment," yet that's exactly what happens. Look at all the civil rights taken away under the Patriot Act, or all the environmental laws stripped and bent so that Bush could look good building a border wall.

Thanks for reading and engaging!
-Alice

"So the philosophy falls apart: because it does nothing to address the root causes of migration, people are crossing just as much if not more than before"

So, how do we address the root causes of migration?

I don't know if I'm feeling up to pushing this issue too much, but two quick points: My feelings on the PATRIOT act are that it is a huge exception here--pushed through both houses of Congress during a time of national crisis by a small group of opportunistic individuals with a perverse agenda.

And I consider the abolitionist movement to be a beacon of civil disobedience, one which was absolutely necessary and which ultimately helped contribute to the abolition of slavery. (It is interesting to note that even after the passage of the 13th, 14th, and 15th amendments following the civil war many in the south engaged in their own subjective interpretation of laws, disregarding the new amendments and continuing to make it hard for african americans to live, work, and vote in certain parts of the south.)

In response to my brother (hi josh!)
The causes of migration are so entrenched in our politics and economics that it's hard to address, mostly because so many groups benefit from the way things are. However, one of the biggest and swiftest ways to act would be to pardon Mexico's external debt to the IMF/World Bank and get rid of the "structural adjustment policies" that have forced Mexico to strip its programs that help its poorest and most vulnerable citizens. Mexico has paid its debt off eight times, and it's still more in debt than when the credit was first pushed on them in the first place back in the 80s. That's just one action to take, but there are many others!

In response to Will,
Isn't addressing any humanitarian crisis "absolutely necessary"?
Also, there is a big difference between individual acts of violence and institutionalized violence. Right now, we have both.

1) Yes. If I inadvertently implied otherwise at any point, I regret it.
2) True, but in my mind many of the indecencies of the Jim Crow era were institutionalized, just not by the US government. (By local and state governments, community leaders, etc.) We have laws in place to prevent and punish individual acts of violence, but obviously institutionalized violence is much harder to deal with.

I don't think I've made myself clear...I'm a big-government pinko spendocrat through and through. I don't object to the notion that there are some faulty laws on the books, I object to the notion that we are consequently better off with limited government than large government. So to that end I think you and I are probably in agreement. Institutionalized violence of any sort is horrendous, but--at least in the case of the US--I don't think that it constitutes grounds to disobey all laws at whim.

(There are a lot of times with these blogs where I think to myself, "Boy, if Professor __________ is reading this right now he/she probably thinks I'm a total doofus." Right now I'm putting Harlan Wilson into that blank. I paid attention in your class, I promise! Please let me cling to my tenuous interpretation of Hobbes' social contract theory!)

Laws are the foundation of civilization, the singular exponent of the idea of government as a social contract: I surrender some freedoms so that I may enjoy others. Without laws we are nothing.

Do you consider all laws so highly, or only those that benefit you?

Advocating for change isn't anarchy. It's being a thoughtful citizen instead of a mindless drone.