As I said last week, the Culture Festival was last weekend. It's an event, largely organized by international students, celebrating the diversity of Oberlin's students and presenting this to the community. Various student organizations and groups had tables set up around Tappan Square, with food and activities available from their respective cultures.

There were also performances, most of which I missed because I was putting on makeup for my Bharatanatyam performance.

I was, of course, present for CSA's lion dance, since I was appearing as a Buddha-esque creature.

As you can see, we went with just a plain mask, since I waited till the day before the performance to buy it, at which point it was raining, and so I didn't want to walk very far. I thought the mask was pretty creepy, but everyone else said that it looked like the masks from Ye Yan and that it would work.

For the lion dance, I pranced around, tormenting the lion and banging cymbals by its head when it was sleeping. It was fun, even though I think I looked a bit too balletic, or maybe like a person pretending not to be balletic and failing. I walked around on the balls of my feet a lot.

After the lion dance, I ran back to my room and spent the next forty-five minutes or so hairspraying, doing my makeup, and trying to get dressed. The last time I wore a Bharatanatyam costume, my teacher had been there to tell me what to put on next and to pin or snap or hook and eye me into it. I mostly just had to stand there. Unfortunately, this year she's abroad, and e-mailed instructions just aren't the same.

For those of you who think I shouldn't have been so challenged by getting dressed, there are five pieces to the costume and they do not go on in an order that is intuitively obvious. I repeatedly had to ask my neighbors to pin things, or if I looked strange. Once I had finally finished all of that and conquered the (slightly less) baffling jewelry, I ran back to Tappan Square. 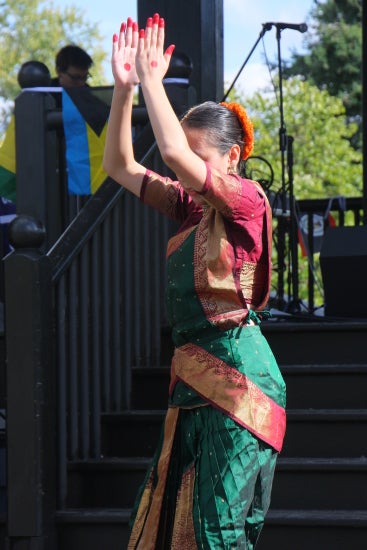 The dance went fine. I'll let you in on a secret: it was the same dance that I did last year, so it wasn't that hard to relearn it. The biggest challenge was dancing on blacktop, which can be pretty scary. Luckily, I'd done that before, in high school, so even that wasn't a big problem.