When I was designing my schedule as part of my proposal for my Linguistics major, I purposefully made this term my one easy term. It's the first time I'm not maxing out my credit hours! Plus I didn't get back into OSCA, so that's one less thing that requires my attention! And I'm not holding the club officer positions I had last term, either! I really thought, going into this semester, that I was going to have some free time now and again. (This is the part where everyone who knows me has a good laugh.) I was wrong, of course.

I did plan it well - my schedule is more flexible than it's ever been at Oberlin. I've only got about ten hours of class a week; outside of class, I spend a few hours playing my various instruments every day, my band rehearses weekly, I've got a two-hour lab on Tuesdays, and I do some form of acrobatics four days a week. It's really not much. The problem is, I'm in CS 151. 151 is the second weeder class in the intro CS sequence, which means it's the first weeder class all over again but with the knob turned up. (Learn new Java things, write code, occasionally get stuck and resist the urge to put your fist through your computer screen, debug your code, make it pretty, wash, rinse, repeat. Go to the prof regularly to vent/cry/plead as needed.) I don't think I've spent less than 10 hours on a lab so far, and most of them take me more like 15 hours - which, just for some perspective, is half again as much time as I spend in classrooms in any given week.

My partner, who took this class last term and will probably double major in physics and CS, has spent a lot of time telling me to relax and accept that the graders might find bugs in my code that I can't find. I've tried to take it to heart - really, I have - but my brain just does not know when to say 'all right, good enough, I can stop working on this now.' It doesn't even acknowledge that that's an option. So when it's faced with a complex assignment (like every CS lab ever, for example) it doesn't let me stop fiddling with it until I am literally at the deadline. 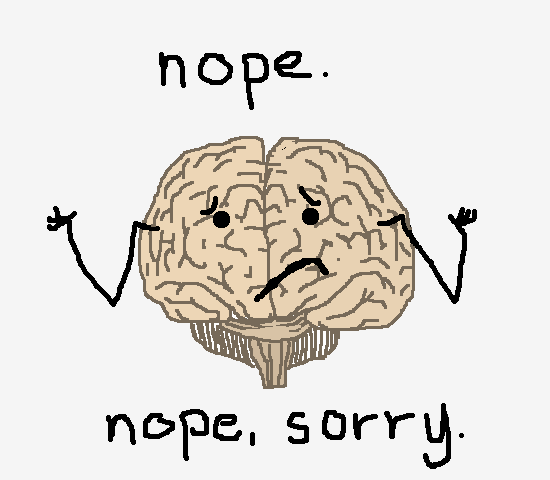 I've talked to my partner about his physics and CS courses, and from what I can tell, his chosen fields have a large, nebulous sort of space in between 'failure' and 'success' in which you've fudged the details but still get evaluated favorably. As in, his physics tests this term routinely get scaled so hard that an 80 is still an A, a B is from 60 to 80, and you only fail if you get below a 40. So, you're not expected to be able do everything that is asked of you, just sort of get the gist of it? I have such a hard time with that! I'm too much of a perfectionist to be able to relax in that sort of framework, probably because I've been conditioned by my chosen fields to have a different set of expectations of myself (edit, edit obsessively, edit ALL THE DETAILS). Or perhaps my brain always worked like this and that's why I never got into math or physics even though I've always had great love and respect for them? Either way, the CS and I are not fated to be together. 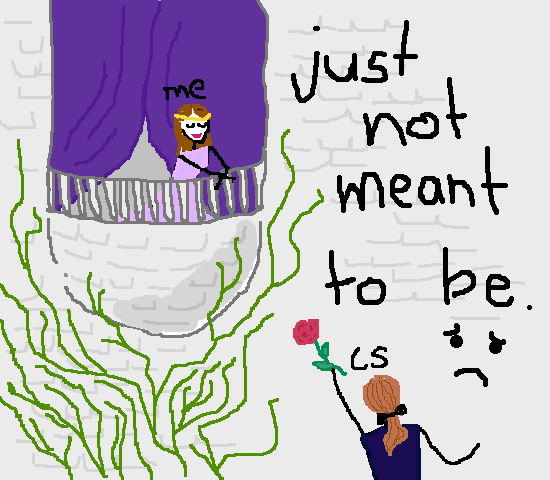 So I'm working hard. Maybe a bit too hard. Lest you get the wrong idea, though, let me pause to clarify that I have so much fun in CS 151 that I sometimes feel like I must be cheating. Alexa Sharp teaches CS 151! Alexa is adorable, strong, intelligent, kind, amusing, skilled at making complicated stuff sound easy, and, as you would expect from someone with these traits, a powerhouse professor. She makes everything better. I mean, I do also like the material for its own sake - otherwise I wouldn't be subjecting myself to a stressor this stressful - because it's pretty much just puzzles upon puzzles, and I love puzzles. (My favorite part is that moment, half an hour before the deadline, when you finally get the last bug out of your program. That moment is gold.) So yes, I am working hard, but I am often unsure, at any given moment, whether it's work or play that I'm doing.

Thankfully, my other classes are of a more comfortable format that doesn't make me work (play?) quite as intensely (otherwise I'd really be in trouble this semester). I've got a class on the representation of terror in New German Cinema, which I signed up for because Sonja Boos is teaching it and she's a delight to learn from; it's sort of an academic mashup of an in-depth analysis of a very specific period of German history and an overview of the basics of talking about film intelligently. I'm a fan.

My other German class is the writer-in-residence course that the German department offers every fall. The author this year brought along a friend who puppeteers for a living, and the two of them never fail to improvise face-bustingly funny antics in class. They're great believers in doing first and thinking second, and also in mutual teaching, which tends to make for a class in which we have no choice but to get engaged. (I'm a fan of that, too.) One time, we folded primitive hand puppets and then spent half an hour on a writing game where we wrote a line, folded the paper over to hide it, passed it to the next person in the circle, wrote another line on the new sheet of paper, etc., until we got to the end of the page, at which point we got behind the puppet stage that had come out of a suitcase at the beginning of class and read our nonsense texts out loud via our puppets. Every so often, some of the lines would coincidentally combine in a way that no sane person would have written on purpose, but that still made a brilliant kind of language-bending sense. That was a mad fun lesson.

Last on the list of my academic courses is Fundamentals of Linguistics, for which my joy knows no bounds. Derivations! Syllable trees! IPA transcriptions! Do you know how excellent the International Phonetic Alphabet is? It's so freaking excellent! I once wrote out my homework, lost it, printed it out and wrote it again, and didn't mind at all. I love this stuff. I'm going to be staying on campus this winter term to do syntax, and I CAN'T. WAIT. All the time will be linguistics party time. 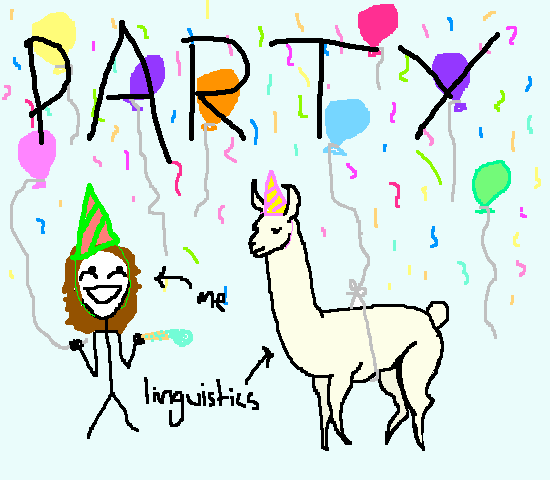 By the by, if you're sad that I'm writing the least about my most loved class, don't worry! There is a post on the way about the curriculum that I wrote for my Individual Major, and it will give Fundamentals of Linguistics a little more love. Until then, here, have this audio post whose original source I can't track down but is still worth listening to because oh man linguistics boner.

good heavens, YASAE in audio (YetAnotherSouthernAccentExplanation).
The party llama rules, by the way.

Interesting to think about how CS assignments compare to humanities/ social science writing assignments. Since I'm also a somewhat fanatical editor, I think I might face a similar reluctance to stop messing with my work if I ever tried to take CS. I'm so glad I know how llamas hold helium balloons. Also, your new photo is excellent. It looks like you, and you are excellent.

Nora: you are excellent too. Photo cred goes to Will Passannante for all of my icons and banner photos to date.

That is all. I love the party llama.

That was a very interesting audio clip, although I have to agree with you that I found the argument weak. Although to be honest I'm not really sure why anyone would assume that a Southern accent makes a person stupid anyway.

I always compulsively made my CS labs perfect, too, and couldn't imagine doing otherwise. Which perhaps explains why I got my highest grades in CS classes, and also why I decided to only do a CS minor. While I did really enjoy labs as a fun puzzle, I ultimately decided that I didn't want to spend such a big chunk of my academic time/effort on something that was so specialized and that I wasn't really intending on pursuing post-graduation.

I've now had so many people read this post and tell me they had the exact same experience with CS that I feel I should add this: being a perfectionist and deciding you can't afford to spend such a huge chunk of your time every week on just CS is apparently not uncommon here!

I think my experience may yet be a little different, though, because had I taken CS 150 earlier than second semester sophomore year, I would have majored in it in a heartbeat. Would've been an incredibly easy decision; I do love it terribly. I could happily have spent a huge chunk of my time every week on just CS! But it's too late now - I can't make time for it anymore, I've already got two majors and like five or six instruments I am learning/should practice more. And I like sleep.