Senior year has been a monumental challenge for me, in so many ways. I didn't expect it to be that way, too, and the unexpected challenges have made it even harder. I always heard that senior year of college was the best: best classes, best professors, best friends and the most fun. So when I came home from my first semester for Christmas feeling burnt-out and freaked out - burnt out from school, freaked out for my future - I felt like there was something wrong with me. Why wasn't I having as much fun as I should be? What was I afraid of?

There are a lot of answers to this question that I'm not going to delve into (in a nutshell: New Zealand withdrawal, taking hard classes, job applications, gray weather, looming graduation, problems with anxiety). But I've recently come to realize that the hardest part about senior year, for me, isn't any of these things. It's hard to explain, but at its core, I would describe it as the process of reverting away from the person I had in my mind as the person I wanted to become (a badass bilingual female scientist) and into my actual self (a writer, a dreamer, an outdoors-enthusiast with a lot of remaining uncertainties).

For my entire life, I've looked up to female scientists as the kind of person I want to be someday. It started with a Smithsonian DVD called Amazing Caves, which featured two female scientists who collected data in caves in Greenland, Utah and Mexico, and used the documentary for educational purposes. I then had teachers who would influence my desire to become a scientist: in high school, there was Ms. Harris, my super-cool chemistry teacher in high school who used M&Ms to demonstrate molarity, and Mrs. Benjamin, my physics teacher who loved Rube Goldberg devices and catapults. Then, at Oberlin, Karla Parsons-Hubbard was immediately placed as my advisor, and she has inspired me like no other. Picture an athletic, outdoorsy, chaco-wearing paleontologist-biologist who travels to the Virgin Islands to do research on coral reefs and the Gulf of Mexico to submerge in a SUBMARINE to collect data on benthic organisms near oil seeps - that's my advisor. She is so smart and so cool and I have spent much of my Oberlin career figuring out a way to be her. Finally, in Rarotonga (where I traveled for a couple weeks while studying abroad) I met Nan Hauser, an incredibly intelligent whale migration scientist who also happens to be artsy, beautiful, hilarious, and completely passionate and dedicated toward her career. She inspired me so much when I met her and made me want to become an animal migration scientist. 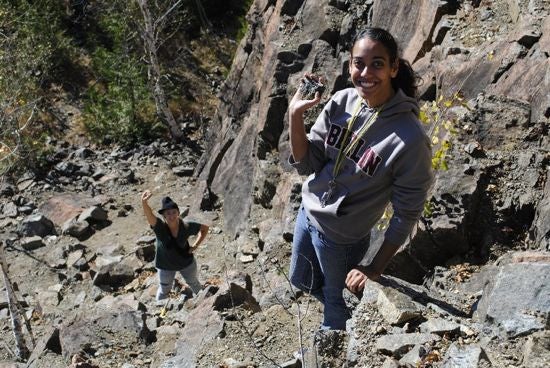 A photo of my friends Sujata and Alice on a mineralogy field trip in the Adirondacks. My geology friends inspire me just as much as my professors - they work so hard, but always have a laid-back, down-to-Earth and non-competitive attitude.

Here's the catch, though: This year I've realized I don't want to be a scientist anymore. I'm not sure when the switch happened - probably in New Zealand actually - but I know it's not for me. I find the scientific process tedious and difficult and frustrating as all get-out. I am horrible with Excel, not to mention more complex software programs like GIS or Grapher. Chemistry has been, to say the least, the hardest subject I have ever had to master. I love learning about science, but I don't love the actual process of doing science. Writing, on the other hand, is something I do compulsively and willingly.

(Note: You may be wondering if I wish I had majored in English, instead of minoring in it. The answer is no. I have loved my geology major and not regretted a second of it. Science is the lens in which I wish to view the world and incorporate into writing. Further, I find the process of raising my hand in discussions and sharing my opinion in front of my peers [such as in English classes] to be completely mortifying and I'm convinced if I had pursued an English major here, I would have been an anxious mess for four years. As it is, I've only been an anxious mess for one of them [this one] and a semi-anxious mess the rest.)

For a while, the fact that I struggled so much in my chemistry classes and select other science classes really bothered me. I felt inadequate, not smart enough. I had always believed that if you worked hard at something, you could do it. All I wanted was to be a scientist, so why was I having such a difficult time? Was there something wrong with me?

It didn't take me long to realize that this kind of thinking is incredibly backwards. My strengths may not lie in the sciences, but I have other talents, ideas, and abilities that are just as valuable; and, moreover, this kind of revelation actually poses less of a challenge than it does a solution: it's good to know more about myself, and what I can't or don't want to do with my life. The challenge that remains, though, is knowing I will never become my life-long role models, and that I will have to become a different, but truer, version of myself. The challenge is finding a way to incorporate what I admire and respect in my professors into my character, but to know where I differ from them.

Senior year is hard because you expect to know yourself and what you want to do by now (I mean, you have FOUR YEARS at college - that sounds like a long time, right?) - but for me, at least, I still find myself a little unsure of who I am and what exactly it is that I feel passionate about. It's hard because suddenly, after spending your life looking up to your role-models, you have to step up to that plate and become the role model for yourself. But I know that whoever I do end up becoming, whatever kind of role model I'll try to create, it will contain a little bit of Karla, a little bit of Nan, and all the other female scientists who inspire and teach me the ways of the world. 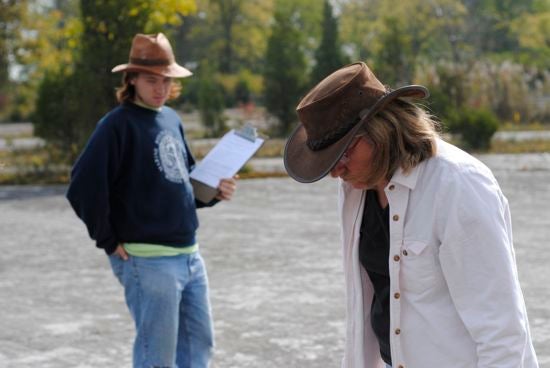 Or at least it will contain a cowboy hat, a must-have for every geologist and geology-lover.

(P.S. I don't want this post to scare everyone away from senior year! The last year of college is an absolute blast and probably involves more beer than angst for most people. In fact, if I have one piece of advice for anyone getting ready for senior year, it's to enjoy it, cherish it, and not worry too much (because worrying gets you nowhere). More fun, fewer frets. More Splitchers, fewer late-nights in Mudd. And on that note, I'm out!)

Thanks for sharing your aha moments with us. You are destined for much happiness.

Great post, Paris... I know I certainly have the same struggles with chemistry. Failing a unit test or two was, in retrospect, an important lesson for me. I realized then that although I'm not a gifted chemist, I'm not going to let that get in the way of studying what I want to study, and it has made me all the more committed to achieving my long-term goals.

I really admire you for pursuing a major in the subject that you love, and not in the subject you're naturally best at. Whatever you end up doing post-college will no doubt be a life-shaping, passion-finding experience.

If chemistry struggles ever get you down, just remember to always act like a acid, and you'll bring positivity wherever you go :)

When I graduated from Oberlin, I knew that one of the things I would miss the most would be my professors.

Keep on Trucking: Science Labs in the Time of COVID-19

Sometimes a classroom has tables, chairs, and whiteboards, and other times it has red paint, four wheels, and impressive horsepower.