At a time when my honors project, graduate school decisions, and the sadness of graduation are consuming my mind, it seems like a great opportunity to reflect on a wonderfully memorable experience I had during Spring Break this year...

This is the true story... of seven Obies... picked to stay in a hostel... work together and have their lives photographed... to find out what happens... when Obies leave the Oberlin bubble... and venture to the Big Easy... IYS: New Orleans!

IYS [the nickname for Immerse Yourself in Service] is a totally student-run organization that does service trips during Fall and Spring breaks. Interested students must fill out an application and rank the sites in order of preference, and then the student leaders choose who they would like to come on their trip.

I will only be speaking about the New Orleans trip in this post [since that's the trip I went on...duh...] but if you'd like to read the descriptions of the other trips, head over here.

Saturday, March 27, 2010 @ 4:30pm EST: OBERLIN, OHIO. Four sophomores, one junior, two seniors, and a GPS named Tina stuffed themselves in a rented mini-van to embark on what would soon become the longest car ride of my life. The 14-hour venture took us through nearly all of Ohio, and straight south through Kentucky, Tennessee, part of Alabama, Mississippi, and Louisiana. The group volunteering in Mississippi stopped halfway for the night in Nashville, but our group was too strong for that. We drove through the night, stopping only for gas, bathroom breaks, and cheap grub at one of the billions of Waffle Houses that line the highways of the South.

Sunday, March, 28, 2010 @ 8:00am CST: SOMEWHERE NEAR NEW ORLEANS, LA. This very moment marks THE most tired I have ever been. Hours upon hours of driving finally led us to the palm-tree lined highway of Somewhere near New Orleans, Louisiana--as well as two rows of sleeping Obies behind me. Myself and Scott Kjellberg [our leader/organizer of the trip] were the only two to stay awake for the entire trip [and we're also the two seniors...go figure]. Nearly falling victim to the sleep monster, we finally got to the city. As soon as we arrived, we went to IHOP, where I devoured some pancakes and eggs and coffee. After eating, we wandered the city a bit, checked into our hostel, bought groceries, and chilled [I think]... I was so tired and delirious I can't really remember. 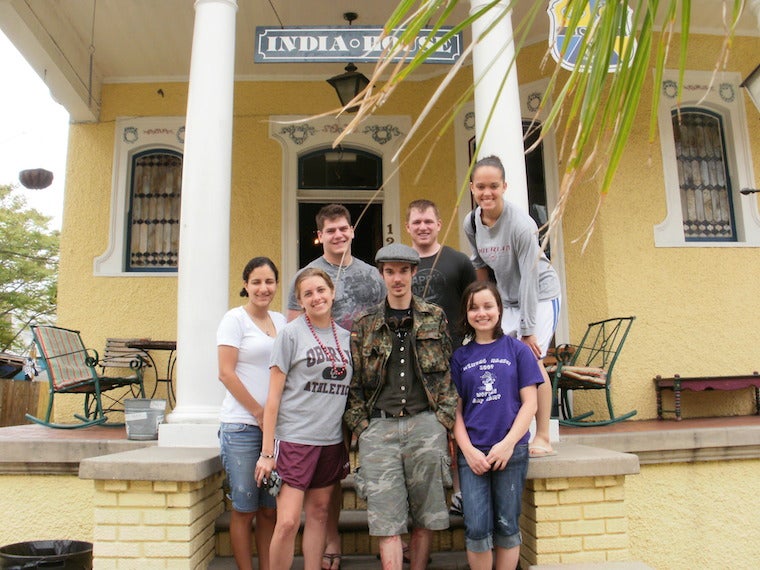 In front of the India House Hostel, our home for the week.

Okay, as much as I'd love to continue in the Diary-esque format of this entry I will probably end up writing a novel nobody will finish if I do. So onto a more condensed method:

Every day [Monday-Thursday], we woke up around 8am to get dressed, eat cereal, and pack our lunches [which almost always consisted of PB&J, string cheese, carrot sticks, chips, and cookies]. Little did we know that we would only end up eating our lunches one day during the whole week, but more on that later.

At 9am, we headed over to a house we had been assigned to paint that day for 4 hours of hardcore labor. The organization we were working with, Beacon of Hope, matched us with the homes of residents whose homes were damaged by Hurricane Katrina. We were usually accompanied by other volunteers [usually this lovely family from New Jersey, the Maloneys], and the homeowners helped us as well. While I ruined a couple pairs of shorts, I overcame my fear of ladders and re-discovered my appreciation for dogs and sunshine. Nearly all of the homeowners we worked with had adorable dogs, and sometimes adorable kids. And while I love Oberlin, the weather in late-March Oberlin doesn't quite compare to that we experienced in NOLA. On most days, the homeowner provided lunch for us. We were fortunate to get to chow down on red beans and rice, Po-boys, and pizza instead of our mushy PB&Js. 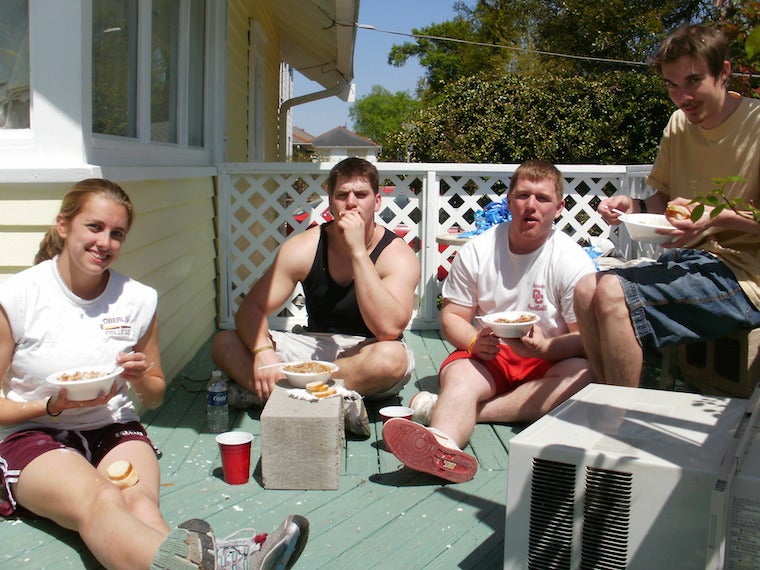 Grubbin' on red beans and rice. 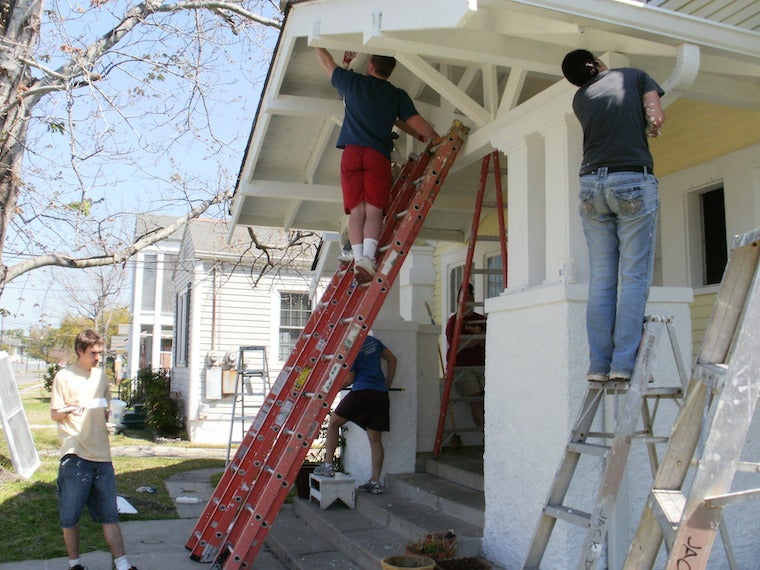 The group with a homeowner we worked with as well as our favorite volunteer family, the Maloneys.

Our last day of painting!

Friday morning was a little different since Beacon of Hope doesn't operate that day. On that day, we went to the National World War II museum, which was AWESOME. They were showing a 4-D movie [no, I don't mean 3-D] which featured shaking chairs, fake snowfall, and feeling like we were actually in a fighter jet. It was brilliant. After the museum we went to this restaurant called Parkway, which has delectable Po-boys [a.k.a. New Orleans' tastier version of the submarine sandwich].

Now that I'm on the topic of food, let me ramble about the delicious dishes we scarfed down while in NOLA. Food in New Orleans cannot be beat. The food was so amazing there that I ate shrimp. This may not seem like a big deal, but as someone who hasn't eaten any meat/fish for two years, it was a pretty big step. Call me a bad vegetarian, but it was so delicious that I didn't regret it a bit. In fact, I got a fried shrimp po-boy the next day. We also went to this restaurant called Mother's, which was featured on the Food Network for its mind-blowing bread pudding. We also discovered a little shop called Queen of the Ball which sells a dessert called snowballs. I had never heard of a snowball before going to New Orleans, and it's unfortunate I've lived the first 21.83333 years of my life without tasting one. It's like eating Dreamsicle-flavored snow dropped from the heavens--with ice cream in the middle. After eating two of these, I informed my mother that the Queen of the Ball needed to be present at my wedding reception someday. 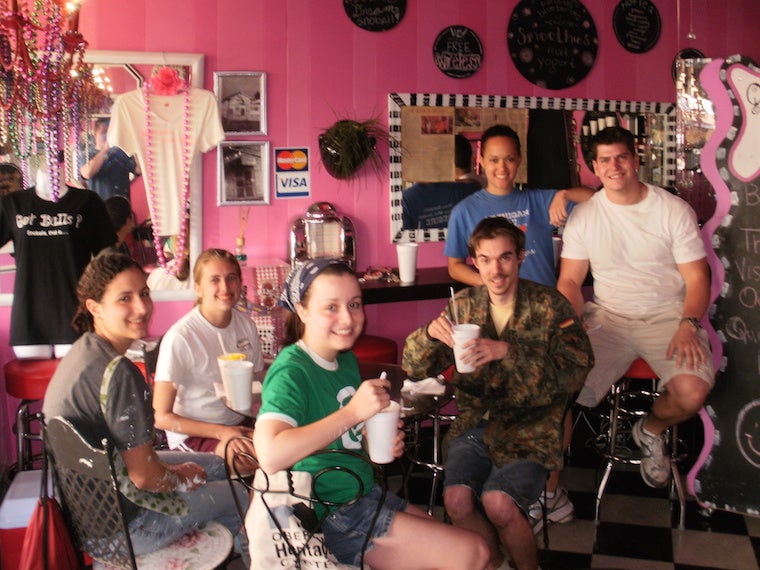 Nothing beats Queen of the Ball after a long day of painting and wrestling with light bulbs.

From 1:30-4:30 each day, we volunteered with a program called Green Light New Orleans. The project entails volunteers going into people's homes and replacing all of their light bulbs with Earth-friendly bulbs. After Hurricane Katrina, the project was launched in order to help residents save money on electricity while also helping make the world a little greener. Anyone in the city can sign up to have the free bulbs installed in their homes, and some people had been waiting two or three years before we showed up to light up their lives. People in New Orleans are generally incredibly friendly, and when we came to change their light bulbs the excitement we saw on their faces let us know we were making a difference in these people's lives. Our task was not easy--it required balancing on dining room chairs, climbing ladders, and mounting bathroom counters. Hearing the homeowners' tales of the hurricane was heartbreaking, but it was important for us to realize that the effects of the hurricane are still prevalent today. There is so much more work to be done.

Cheesy picture with light bulbs after our last day on the job.

When we weren't working [or eating] we spent a lot of time exploring. We walked around the French Quarter quite a bit, watched some live music, and traveled to Mississippi to have a bonfire with the Oberlin group volunteering there. We even saw Spike Lee strolling down Bourbon Street!

What started as an innocent mini-van with 28 miles on it became a rugged, well-traveled veteran of the road one week and 2,000+ miles later. And what began as a group of seven random Obies quickly became a group of seven friends--seasoned in the art of house painting, light bulb replacement, and indulgence of all that is tasty. 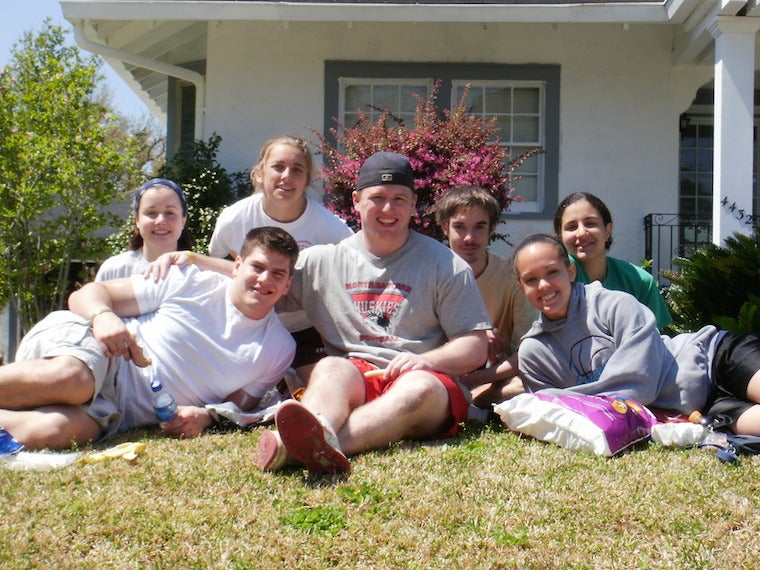 The Cast of the Real World New Orleans: Oberlin Edition.

Alisha, this was beautiful!!! I am personally voting for a NOLA IYS reunion event!!!! We can try to recreate snowballs and hand grenades and po-boys, and include red beans and rice for claire!!

Sounds like a wonderful experience. Makes me wish I was in college again -- only more adventurous!

Its great to see that there are other groups that are giving back to the community. Once in a while we donate paint to local contractors that help with rebuilding section 8 projects. Job well done!

Interesting to read of your adventure. There are a lot of ways you could have spent spring break but your student organization IYS and your group are really doing some good deeds in the community.

I think you should be very proud of yourselves for the help you offered changing light bulbs and painting.
You made it a fun trip and one you'll never forget,
well done to all of you.

I'm not sure what a Po-boy is but you said it was delectable, if I ever get to Louisiana, I definitely
want to try one of those!

Sydney falls in love with teaching through SITES (Spanish in the Elementary Schools) and meets the child of a future colleague.

Teaching in the community is one of my favorite things to do here at Oberlin.

Girls in Motion: An Exco I love dearly

Girls in Motion has always been centered around the promotion of women’s empowerment and body positivity, especially for young girls.