I've written about this before, how I value the opportunities I have as a staff member (and by being a part of the Oberlin community) to hear some of the most influential people of our time. 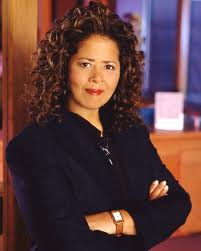 Deavere Smith is on my list of influential people--the artists, writers, politicians, musicians, scholars, filmmakers, environmentalists, as well as the lesser known but equally impactful--who use their intellect, skills, voices to compel us to take action, change behavior, and or think differently.

She describes herself as an actress and a playwright. Others call her a storyteller, a journalist, a performer, a social critic. Whatever the moniker, she often displays these skills in one-woman shows, a genre in which she excels.

Deavere Smith delivers what I'm going to call multi-logs. She creates multiple characters and then embodies each character on stage; she becomes the person through use of voice, dialect, body language, props, and costumes. When I've seen her specials on public television, I'm mesmerized and in awe that she can effectively exude so many disparate personas, ranging from a Texas bull rider to a Korean shopkeeper in Los Angeles. This from a Baltimore-born African American woman.

She conducts extensive interviews with people across the country and uses their words verbatim to develop and tell their stories that address the larger commentary such as race relations, discrimination, poverty, injustice.

You might recall her work on the popular political drama The West Wing, about a fictional president and how he deals with the issues of the day. She had a recurring role as national security advisor Nancy McNally. Despite little screen time, she had such a commanding presence among the likes of Martin Sheen and Bradley Whitford, who played the president and deputy chief of staff, respectively.

I first recall seeing her in the 1993 movie,

Philadelphia (by-friend-of-Oberlin filmmaker Jonathan Demme), about a gay man with AIDS who sued his conservative law firm for wrongful dismissal. Again she only had a few moments on the screen. She left such an impression that she was someone whose work I wanted to follow.

Now to be able to see her in person ... it's as if my wish list is being fulfilled. Already I've seen my favs Toni Morrison, Edwidge Danticat, Stevie Wonder, bell hooks, Esperanza Spalding, Gloria Steinem, among others. Perhaps in a few more years, college organizers will bring in Cornel West or Don Cheadle or Van Jones or Gwen Ifill. Yeah I'm giddy.

Take my word. Go see Deavere Smith. Unless she's uncharacteristically off her game, it'll be a night well spent.