The afternoon we arrived in Banff, a leaflet caught my eye in the lobby: DOGSLEDDING. Yes!!
In order to book this expedition to beat all expeditions, I had to get myself from the Banff Centre into Banff Downtown. Lewis (composition prof) goes, oh it's just a ten-minute stroll, easy peasy. Try walking/shuffling/sliding down a massive hill in -30 weather with snow all in your face... 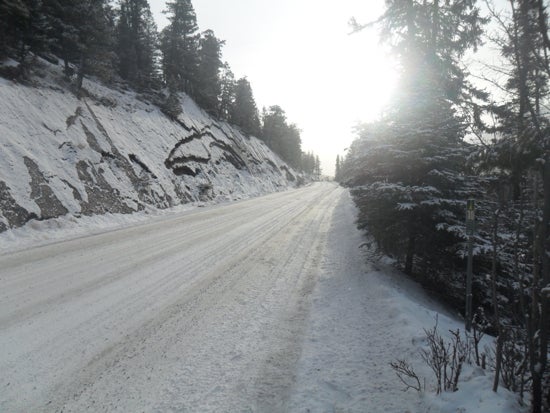 It's icy icy.
And then running into signs like this: 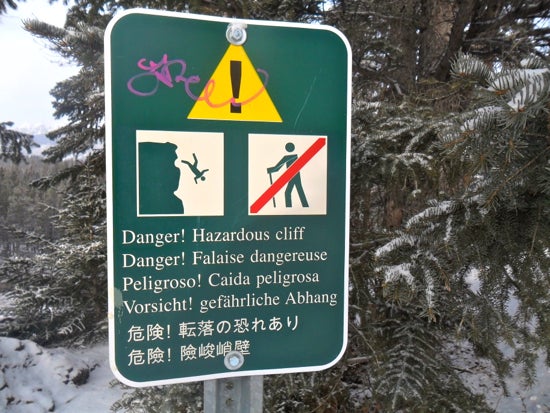 But I took some artistic pictures along the way: 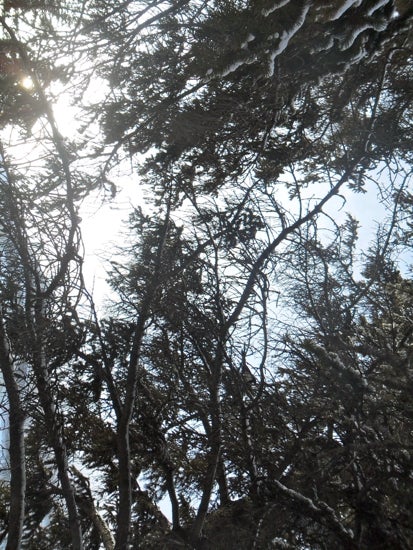 Which way's up? Who knows.
And here's a confused tree: 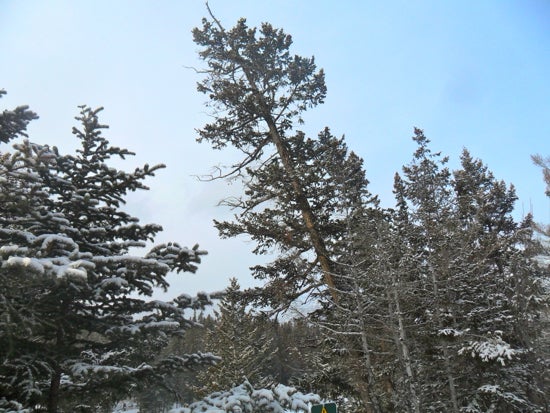 So this is the Banff demographic: you've got the starving artistes on the hill, the chichi ski bunnies hanging out in the DownTown, and elk. Safe to say, it's a weird dynamic. Also, I'm no skier, but really, your idea of fun is going up a hill, coming down, going up, coming down, going up....hmm. Well, I haven't tried it so I can't really talk. Anyway, I'm always going to choose a dog over a piece of plastic/metal.

So I made it to the tour booking office, walked in and said, 'I want dogsledding!' Then I remembered I'd forgotten my gloves on the marathon into town, so I spent the next ten minutes watching myself trying to write 'ruby' without going off the line. Phew. A nice little taste of old age there.

Bring on a week of husky dreaming. I watched every dogsledding video ever. At the height of husky fever, I bumped into this:

Next step: I didn't have waterproof trousers, so I decided to send a mass email out to the 40 resident artists at Banff, asking in the subject line, 'Let's collaborate on ski pants!' More fun than Mozart, eh? (I'm trying to be Canadian with those 'eh's.') I got a reply within minutes (oh yes, us artists are working so very hard surfing the internet) and it went like this:

I have a pair of old fashioned ski pants, v tight ones. (small) if you keen to try flick me a text! They r really not very nice but hopefully do the job!

I googled 'tight ski pants' (big mistake - but what else could i do?) and this came up: 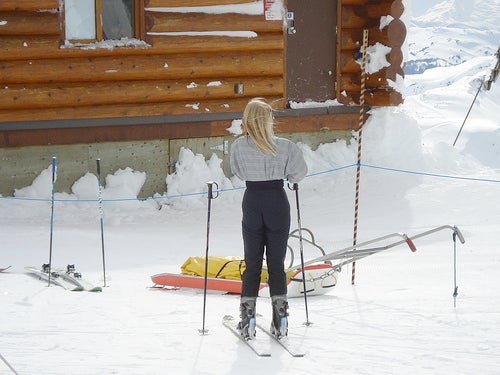 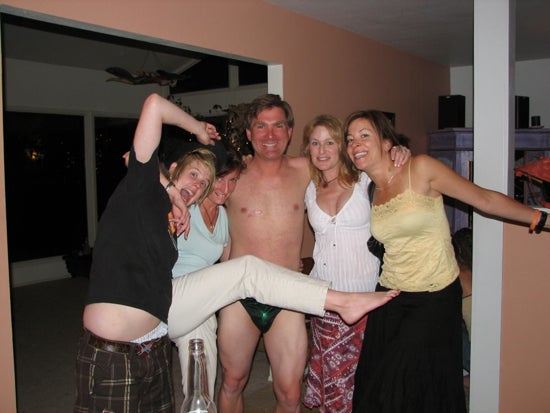 OK, definitely not. Who are all these old fashioned green ski speedo people?!

Luckily, I found some much newer-fashioned ski pants in time for the dogsdogsdogs.

Around this point, we made it into town again to get sushi (I would climb Everest for sushi). This wasn't just any old sushi - oh no, it was sushi delivered on a mini train! The track went all around the restaurant. You had to be snappy and grab that sushi before it rolled off on its travels. Cucumber, avocado and asparagus...mmmm. Can we set up a petition for a Stevie Sushi Bar please?? I would sacrifice the greasy food counter for it any day.

The night before dogsledding, I hardly slept - I was so terrified of sleeping through my alarm. This big old build-up may sound a little melodramatic to some of you well-adjusted, less animal-mad people out there, but one of the other girls on my tour the next day said she'd hardly slept either so I know I'm not the only crazy one.

Snowy Owl Tours picked us up and drove us out to the total wilderness, where 70 dogs were all harnessed up, ready to mush. 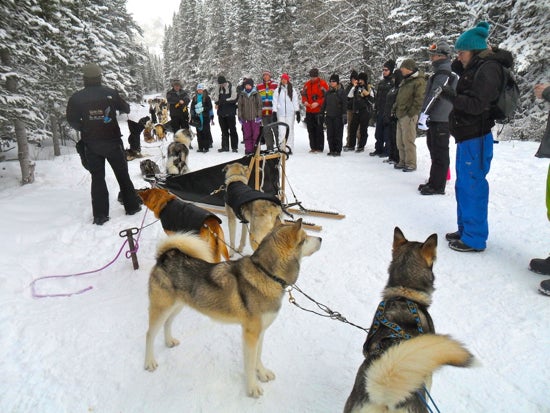 The introductory talk, in which I cuddled dogs whilst pretending to pay attention. We also learnt important lessons, like, 'No matter what happens, do NOT let go of the sled.'

The word 'mush' comes from the French 'marche,' but it doesn't actually feature in current dogsledding lingo. Here's a handy phrasebook for you:

To dogsled, you basically stand on these two wooden skis, and in between there's a brake, which you stand on and push down on to try to get the dogs to stop. You 'lean in' to the turns, and that's about all the steering control you have. I was first to try... 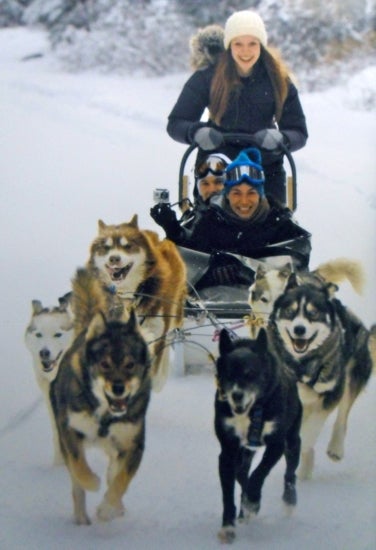 This is a look of sheer happiness and sheer terror at the same time. (Sorry for the dodgy quality - this is me taking a photo of a photo. But the haze kind of makes it look dream-like, which it was.) 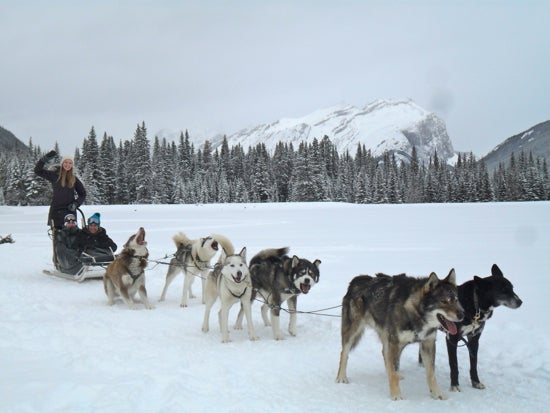 Introducing (left to right, front to back: Bageira, Avalon, Trot (who we nicknamed Kangaroo), Rocksteady, Red and Juliet.

Front right, which of your great aunts twice removed was a husky?! Well, he thinks he's a husky and that's all that matters. Notice Red (profiled dog later on), at the back, barking his head off like no other...while squatting? My mum commented that all the mammals in this photo look the same! And it's true. We are the same. I howled at least once that day (see videos later for proof). 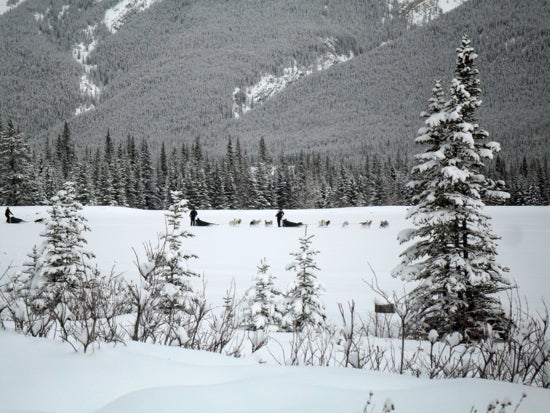 On a frozen lake. A bit scary. 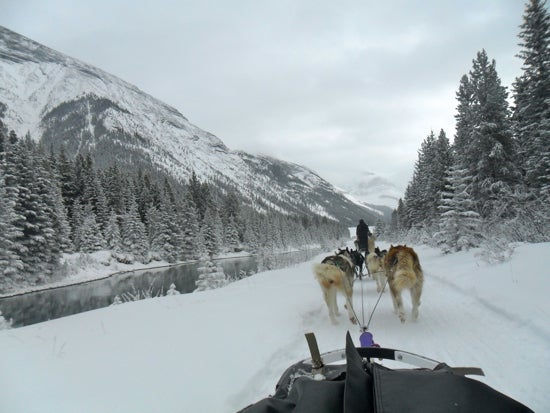 Absolutely stunning. I felt like I was in another world. 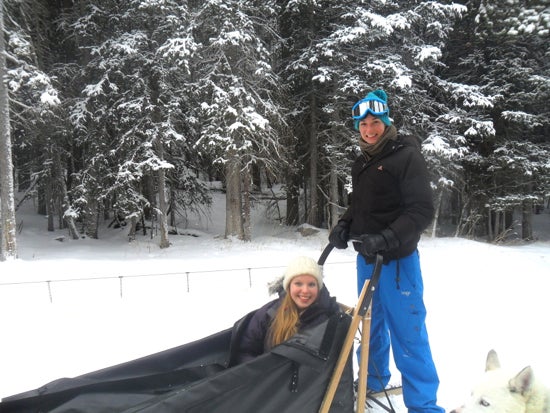 Ruby from England and Ruby from New Zealand in/on the sled! They had really warm blankets :) 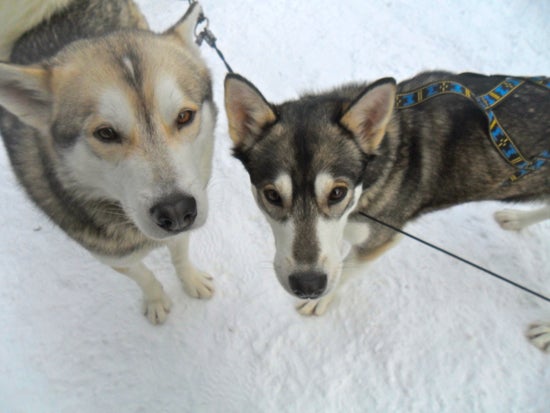 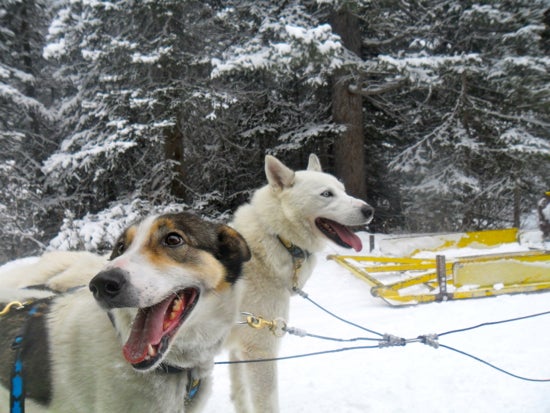 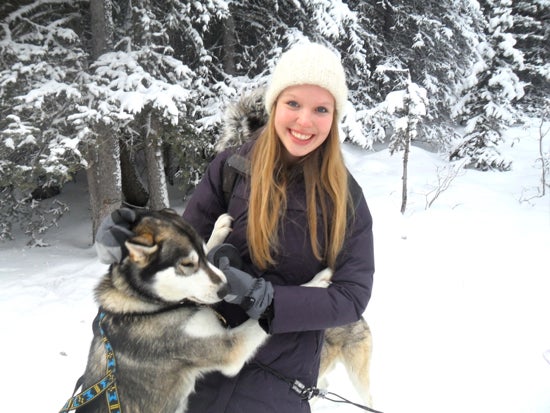 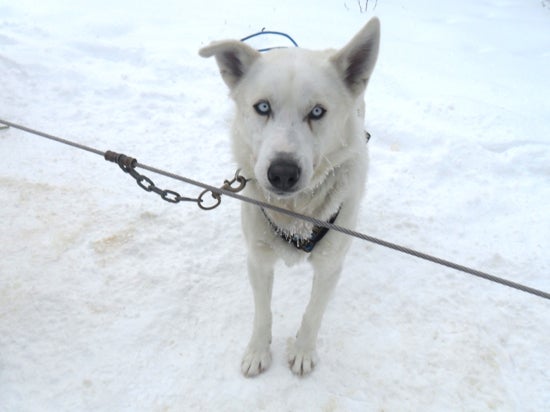 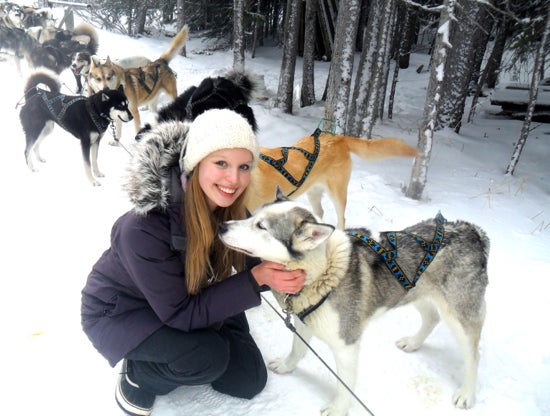 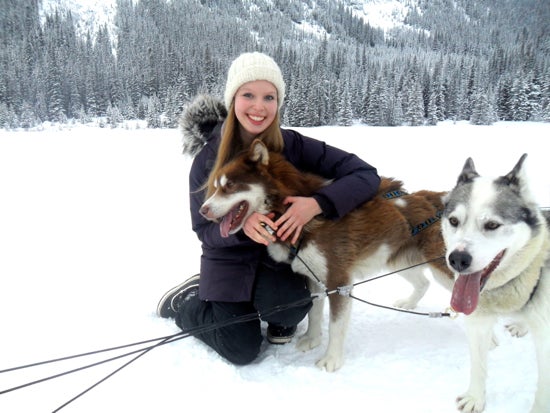 Red is a character. He has this weird deep, waily voice and howls like mad. Whenever we stopped, he'd shove his head in the snow or slide about on it like this: 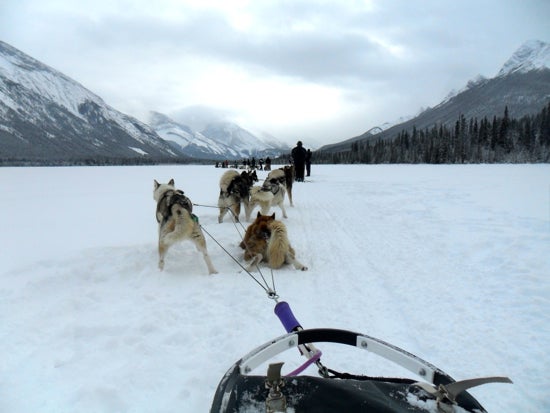 So when you've got this many dogs running around, someone's going to get the urge. Pretty much every two minutes, the whole 70 of us would pull up to allow someone to pee/poo. Because doing it on the go is not advisable. Red once tried to while still running, which was deeply unsuccessful. Unfortunately I cut off this video cos I got scared our sled was going to go haywire as Red slid all over the place, but luckily he pooed in peace and we all survived.

Another character was Trot, who would jump like a kangaroo every time we started up, because she got so excited (you can see it in this video, as well as Red eating snow and my fellow sledders Ruby from New Zealand and Marc from Paris):

At the end, all the dogs were attached to this long chain thing, ready to go home, and we drank cider (non-alcoholic, I think) and ate delicious cookies round a fire. 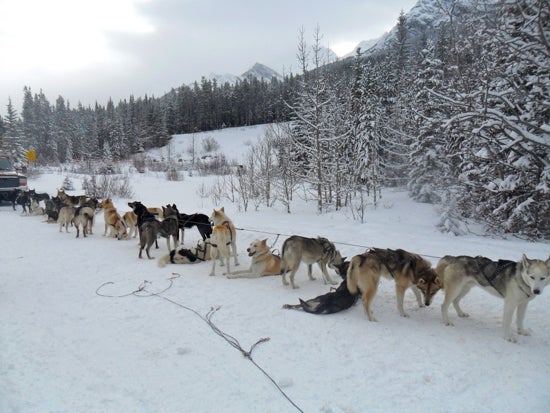 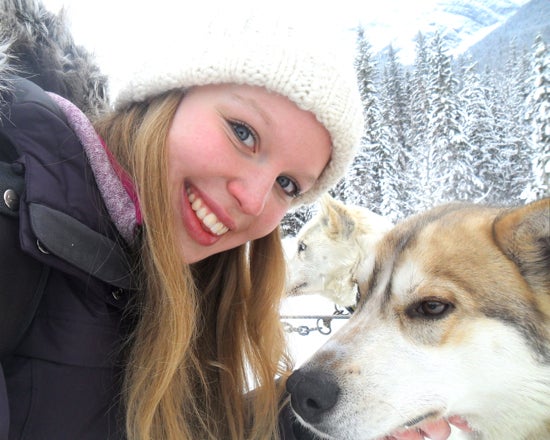 So many dogs! So so many! And seriously, these videos are excellent. I feel like I'm actually sledding with you, and that is exhilarating. I know it doesn't match actually being there, but thanks for giving me a taste of what it could be like.

I agree with you, lets start a petition for a Stevie Sushi Bar :) I just looove avocado and asparagus. Cucumber not so much, but its still better than greasy food.