Swing is a gateway drug. You take the Swing ExCo, start going to dances, and after a bit, you get really into it. You got your lindy hop, charleston, jitterbug, and some spiffy turns. You're a dance machine. When you hear the music start, the grin sticks to your cheeks like saran wrap.

But during a dance, you hear some songs that just don't fit. Maybe they're incredibly fast, maybe they're slow and sultry. But the normal approach doesn't work here. And the high recedes. You don't feel so cool, all of a sudden. Some leads stare grumpily at the dance floor and mutter, "I can't dance to this." As a follow, I should do the same, but generally, I end up dancing, irritating my partner, and making a total fool of myself.

Of course, it isn't always that dismal. Over winter break, I went to a lot of swing clubs in New York, which were often really crowded. At each venue, some gents would ask, "Hello! Do you do balboa?"

Generally, they'd walk away then to dance with someone cooler than me. And I would sigh and pick my nails.

But one guy just said, "Ah, that's cool, you'll pick it up!" He swung me into a closed position and started to, um, balboa. Balboa is danced from "closed position": rather like tango, your chests are connected. Or, if you're dancing with an older man with a fairly sizeable tummy, your tummies are connected. Which I think is super cute, and was helpful. I couldn't see what his feet were doing, but I got a good gist of where to move by the way his torso traveled. When I faltered, he started whispering the steps to me. By the end of the dance, things started to make sense.

Of course, one dance does not make muscle memory.

Helpfully, one of the best balboa dancers in America... lives in Cleveland. Valerie Salstrom. "Bal Val" is a great dancer, and a spectacular teacher. OSwing, Oberlin's swing dance club, in its great and powerful wisdom, invited her and her partner, Matt Mitchell, to visit for a weekend to teach balboa and blues, with a full day spent on each.

The workshop was simple. While last fall's workshop, the Hooverville Stomp, had four teachers, a live band, outside DJs, and a truckload of alums coming back, this time was decidedly more chill. Jeremy and Anna took the lead on advertising and organizing, and put the focus on the classes portion. This was great, as we all had a lot to learn. 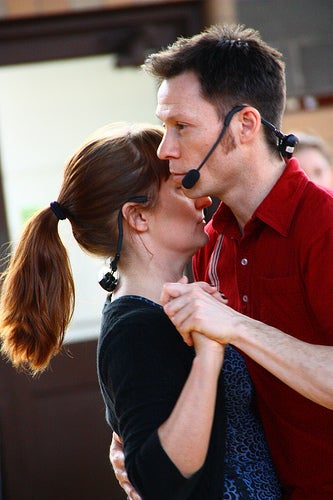 Val and Matt demonstrating the basic. All photos courtesy of the excellent Fenna Blue.

Originating in Southern California during the '20s, balboa was created to respond to overcrowded ballrooms, where swing-outs, breakaways, or large movements were often difficult, if not actually banned by the venue. As a result, balboa looks way different from swing--it's more for dancers than spectators. Movements are small, fast and shuffling, with focus placed on weight shifts. Generally, dancers take up a tiny amount of space, allowing them to jam to fast music (say, up to 300 beats per minute).

The Cat was stuffed with dancers on Saturday morning eager to learn: Obies, Case Western kids, Cleveland and local dancers. Lessons went on all afternoon, with a dance in the evening. Given midterms, the crowd changed shape and size, but was always enthusiastic. 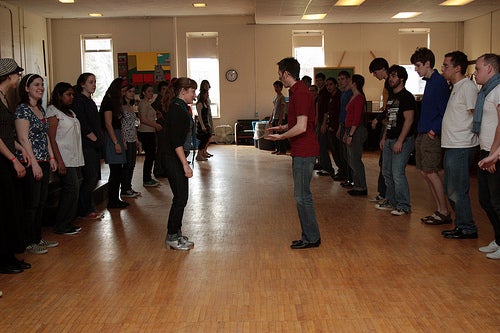 I struggle to describe dancing. As a follow, you need to shut off most of your brain to really listen. It's a fascinating exercise, and it leaves me with the dumb grin I get after hours at an amusement park. The more nuanced, the less I use my brain. I just feel.

At the beginning, balboa felt really weird. There was a bunch of off-balanced-ness and toe-scuffing; I realized which leads had worn deodorant, who had drunk an entire pot of coffee. Because the dance was so new to me, and none of the clues were visual, I closed my eyes pretty often. In retrospect, the morning seems dreamy, like a fantasy ball, where everything is swirling and little movements.

It was sometimes hard to "read" my partner, until Val said, "Follows, be your lead's shirt." Somehow, the shirt metaphor clarified a lot.

However, there's still a lot lost when I can't always feel the steps with super subtle weight shifts. It's hard to meet a stranger, and instantly move as one organism. But considering where I started, I'm pretty happy with my progress. 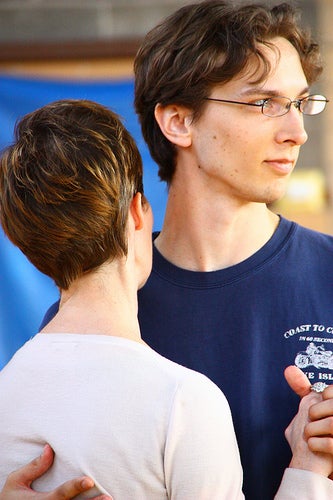 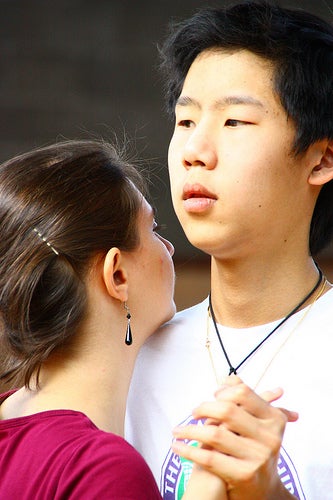 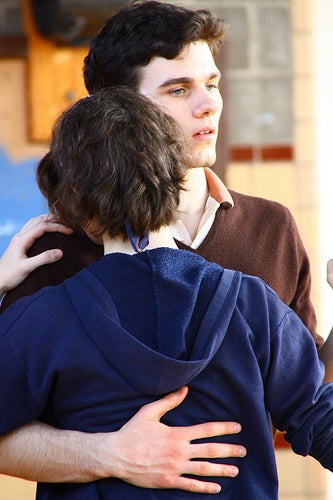 What was fantastic was that nearly all of the Oberlin folks were at the same level. Confused, giggling, hitting toes, having to restart, counting out loud. While some leads picked it up faster, it was still a lot of graceful stumbling around. No one worried about perfection, just about playing with it.

"Can we try the kick thing?" one of my leads asked.

He led it perfectly, and as we swiveled around the room, he exclaimed, "Sweet! I didn't think it would work!" 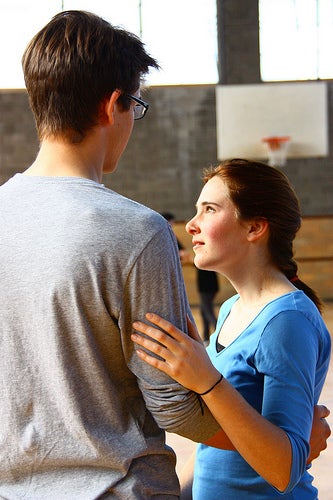 The attitude of the whole event was relaxed, a testament to the organizers, Jeremy and Anna. Jeremy is a ridiculous good dancer (also a phenomenal Go player and pastry chef). Watching Jeremy dance is like watching a stream flow. A very suave, charismatic steam.

Besides being an amazing dancer, Anna is the incarnation of grace and cheer. She's a ball of sunshine, a cloud of bubbles. It's impossible to be reserved, or irritated, around Anna. 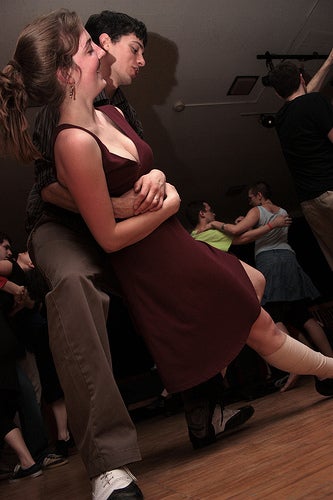 Anna and Jeremy dancing. Note how Anna is not actually standing the way normal humans do? That's because they're doing blues, as discussed super soon! Photo Credit: Fenna Blue.

All photos credited to Fenna Blue. If you'd like to see more of the event, check out her collection here!