I wonder what it feels like to be courted, to be pursued, to be sought after ... but in a good way. I don't mean being sought after for a traffic violation, a delinquent credit card payment, or by a phone solicitor who wants 20 minutes of my time for a political survey. 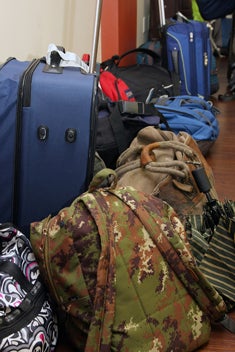 I'm referring to students who converged on the campus about two weeks ago as part of All Roads Lead to Oberlin. Our Admissions Office coordinates this outreach effort for admitted students who've not yet committed to attending Oberlin.

During a roughly two-week period, students from all over the country come to campus for the first time or for a repeat visit to help them determine if Oberlin College is the best fit. Planning features separate but parallel programs for parents and students. The visit often includes dinner or dessert receptions with deans, professors, staff, and students, campus and town tours, classroom visits, panel discussions, info sessions, a concert or other social happening, and, for some, overnight accommodations with a current student.

It is a terrific opportunity for admissions and the campus at large to showcase all that the college and community has to offer aspiring Oberlin students. It’s a red carpet-like treatment for families—minus the cameras, celebrity emcees, and plush carpet.

The Admissions Office encourages campus members to be a part of the allure and this year I volunteered. I attended a parents-only dinner at the Koppes-Norris House that also serves as the home of the dean of students. I also had a breakfast and a lunch with families, and called about a half dozen students to congratulate them on their acceptance.

Parents and students often asked what makes Oberlin Oberlin or as some would term it, the ethos of Oberlin. One parent asked what were my favorite places. When I can break away from my cozy yet windowless office, my chill spots include Mudd library, the Science Center atrium, and Tappan Square.

Another parent asked if Oberlin was too much of a bubble because of its size and small-town feel. I told her that unlike other schools in Ohio that tend to admit students from a particular region within the state, Oberlin draws students from throughout the country and abroad. That ‘‘All Roads’’ moniker is true: I met families from Minnesota, New Jersey, Nebraska, New Mexico, Colorado, New York, Florida, Washington, D.C., Maryland, and California. I also met parents with origins in India and Brazil.

One dad, originally from Nigeria, wanted to come here after learning about the college’s longstanding commitment to inclusion and social justice and yearned to study in that kind of environment. However, once he became of college age, he said he could not afford the tuition. Now a professor at a Colorado college, and the father of three daughters, he was overjoyed that his youngest daughter was admitted to Oberlin. Yet he had some anxiety.

His youngest daughter was the last opportunity for a member of his immediate family to attend the college he could not. He learned from his experience with his middle daughter, who also had been admitted to Oberlin, not to speak too favorably about a school so as to show bias. His enthusiasm in part, he believes, prompted his middle daughter to choose another school. He's tempered his approach this time, he said, and will accept whatever she decides.

That seemed to be the overall approach of other parents, who have resolved (possibly reluctantly?) to allow their son or daughter to make the final decision.

For some students, the choice is clear: Oberlin has something that a competing college did not. Perhaps it was a type of co-op, the focus on sustainability, community service opportunities, a purely undergraduate curriculum, study abroad, music, music, and more music, pedestrian-friendly streets (e.g., no car needed here), foreign language-based housing, and as I explained to one student, a small community with a global perspective.

For others who were still on the fence once their first-hand experience on campus concluded ... I'll be curious this fall to find out how many of them chose the road leading to Oberlin.

That father is from Sierra Leone, not Nigeria; and it's his middle daughter (not last). More importantly, she decided to enroll at Oberlin in the Fall. So, my plan (of not talking Oberlin up) worked. For what else can a father ask?

I should have taken notes of our conversation rather than rely on memory! I hope you will forgive my faulty recollection. :-)

I heard many touching and compelling stories from parents about their children and their aspirations and yours was among the most conflicted, considering your personal dreams of wanting to come to Oberlin and how your children had the opportunity you didn't... yet may choose otherwise. I am glad your middle daughter decided on Oberlin. She's sure to have an all around great experience.

All Roads did lead to Oberlin. Woo hoo!