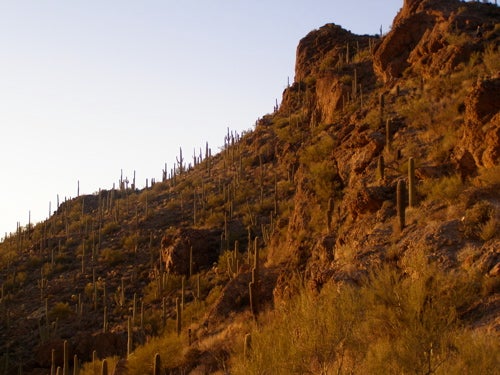 I'm just crawling into bed now, exhausted at the pathetic hour of 9 p.m., after the first day of my semester abroad. I'm in Tucson, Arizona, on the Border Studies program run through Earlham College. Now you might be thinking that Arizona isn't exactly abroad and Tucson isn't exactly on the border (it's an hour north), so let me explain. I was accepted to this program months ago, when it was supposed to be in Ciudad Juarez, Mexico. When the drug war escalated there and shootings in broad daylight became commonplace, the program was moved to the smaller, calmer town of Nogales, Mexico. Then, recently, the drug war made its sinister way to even the smallest and calmest of border towns, shaking up Nogales with random acts of violence, and the program was moved to Tucson. Now initially I was upset. The program had become something I had not signed up for. I wanted to be immersed in Spanish and Mexican culture and be challenged on a day to day basis. I didn't want some safe, easy program in the U.S. where I could study immigration from a distance and not really experience it.

But ever since arriving to this unique program, my fears have been washed away. Starting in a few days, I will be living with a Spanish-speaking host family in the south side of Tucson (which I've heard described as "more Mexican than Mexico"), working with an organization called Border Action Network that does community organizing and resistance among migrants in Tucson, and taking a month-long journey throughout Mexico with my program, visiting communities that are important to the immigration story.

Today, after meeting my fellow students at the airport (by the way, there are only six of us, and we're all women) we ate incredible Mexican food, held an orientation explaining the days and weeks ahead of us, hiked up a saguaro-studded hill to watch the sunset, ate more incredible Mexican food, got to know each other and talked about how we had all chosen this program, then crashed (that's where I am now, typing as my eyes droop). The days ahead will be full and intense, including crossing the border on foot on Sunday to tour the infamous maquiladoras fueled by NAFTA and poverty. 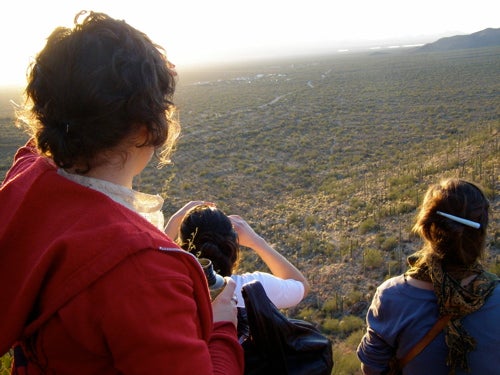 Something I've learned already from being here is that the line between "Mexico" and the "U.S." becomes blurry in the borderlands, and though the wall dividing them is quite clear, the communities on either side make it feel arbitrary. So, in the sense that I'm in a new, beautiful place awaiting difficult experiences, I am abroad.