Before I get started on the meat of this post, which is about the trip the Sunshine Scouts took to Chicago for the national improv tournament finals, I would like to say a few things about my Winter Term project for the benefit of those who have shown interest in it over the past few weeks.

I turned in the final version (72 pages with the appendices, which include complete transcriptions and data tables), this morning. This afternoon, I had an e-mail from my sponsoring teacher calling the project "fantastic." He said I should present my findings and that I might want to consider being a Sociology major. That feels pretty dang good.

Now, back to the Scouts.

Last week was busy. I got back to Oberlin on Tuesday night and spent most of Wednesday getting reoriented. Wednesday evening we had our first practice. It was a different set of people than what we'd done last semester. For starters, two people are away this semester. Not even all of us still in the country were going to be able to go to Chicago--one member, Sam, was in Love's Labour's Lost, which opened the night of the show, so he had to stay in Oberlin. Those who had stayed in Oberlin over Winter Term had practiced together periodically and even put on their own show, but the rest of us were trying to get back into top form quickly.

We had two practices Thursday. In between these practices, my roommate and I switched rooms. (We have a divided double, meaning each of us has a small room of her own, but only one room has a door into the hallway. At the beginning of the year, we decided to switch after the first semester, so each of us would have a chance in the outer room and the inner sanctum.) So Thursday was an exhausting day: four hours of improv and at least as many of cleaning and moving possessions around. Then I was up fairly late playing Monty Python Fluxx--goofiest card game ever invented--with some friends. Fortunately, however, I got enough rest to be ready to roll Friday.

We left at noon in two cars. The plan was to drive straight to Chicago, with any luck arriving there before dark. We were going to be staying with some Scouts alumni, who "had access to a ballroom" where we would sleep. We would hang out with them that evening, practice, sleep, get up early in the morning, and go to the 9:00 "meet and greet" at StudioBE. We would be performing later in the day, but our presence was required for the introductions as well.

That's pretty much how things worked out. The five-hour drive went smoothly, with a democratic method of choosing music and crazy topics of conversation. I spent part of it sleeping or reading the new book by Sir Terence David John Pratchett (I'm still thrilled Terry Pratchett got knighted; can you tell?) but was also part of a really interesting discussion of dreams and how they have significance in different ways, etc.

We pulled into Chicago just after it began to snow. (It actually snowed a lot that weekend; it turned out we'd just missed a dump of about six inches in Ohio. Washington, D.C. got hit the worst, though.) It was bitterly cold. Fortunately, we did not have far to walk at all to get to the home of the alumni who were hosting us. We went up three flights of stairs and were welcomed into--

It's difficult to describe that space. I had considered bringing my camera with me but, in the end, didn't, a fact I instantly regretted. They had called it a "ballroom," and later told us it used to be the Lithuanian Cultural Center, so that may give you a feel for the scope of it. I'm not good at judging distances, but I estimated the room ran a little under a hundred feet to the left of the door. To the right, there was a small kitchen-dining room-bathroom chain of rooms. Stairs led up to bedrooms directly above this section. A small curved platform jutted out from the far wall towards the door. There was a sort of two-story-tall booth behind it, now used as a bedroom. The room was about fifty feet wide.

It was two stories tall where the rafters crossed the roof, but there was still space above those as well. Someone had built an extra room in that space (mostly out of paper-mache). It was a small, cozy nest with a bed, an opening window for air circulation, and bookshelf niches built right into the walls. You got into it via a ladder from the second story.

It was dark when we straggled in, except in the area to the right of the door, which is where most of the living happened--the big space, I feel, was more for hanging out and semi-official performances. There were large lights overhead, but they weren't turned on. A few floor lamps and Christmas lights wrapped around the back of a chair were our illumination as we met, talked, and attempted to skate (there was a skateboard and one of those things like a skateboard with a hinge in the middle. I could barely handle the regular board, but Isaac was soon zipping around the room on the wiggly one--very amusing). There was furniture scattered around the big central area, but not much, and it was easy to avoid.

The Scouts alumni, Ben and David, were truly funny (of course) and very friendly. We went out to eat at a nearby diner called Huck Finn's. This was wonderful, because I was starving, as were most of the rest of the group. Since they also sold doughnuts, we bought a dozen to take back for a snack.

Back at the room/stage/Epic Space of Awesomeness, we talked and played some more. Someone turned on one of the big overhead lights and still more wonders were revealed. From the rafters dangled: a swing!

It had a blue wooden seat, with the word "FLY" painted on it in white, and we took it at its word. I enjoyed watching the faces of the other Scouts as they swung on it, and I loved being on it myself, getting underdogs, trying to see if I could touch the disco ball across the room. (I couldn't quite, but Tim almost did.)

After the novelty of the swing had worn off slightly, someone produced one of those huge parachutes--you know, the kind you used in P.E. in grade school, where you put dodgeballs on it and bounced them up and down, or you ran underneath and pulled the edges down and sat on them to make a tent. We had more fun with that thing--wrapping each other up in it and then rapidly unspinning them, making a tent, tossing around a roll of duct tape, bonding in sheer silliness--than I think any kindergartner could imagine. At one point it got stuck up on one of the fans overhead, but a giant pole was produced from somewhere and it came down without incident, though rather dirtier.

It was at about this point that I decided I want to live like this when I (fail to) grow up.

The real treat of the evening, of course, was yet to come. Remembering that we had come here for a purpose, after all, we got into a performing mindset. We did our usual improv warmups--David and Ben joined in--and then the Scouts put on a show for our hosts. Halfway through this, the power went out, and we finished the story by candlelight. It was interesting to see how the different lighting affected our tone.

Then David and Ben performed for us. They had just done a performance the night before, the first of a series about two men who work together, and gave us a taste of what that was like. It was an improv show, of course--they had designed the characters but everything else was fair game. They, too, adapted to working in the dark, and even incorporated it into the show. The lives of two desk jockeys were never so amusing. ("Your barber always holds a razor at your throat?!?" "Why yes, doesn't yours? I assume he just forgets to move it when he's done shaving me.")

Then the lights came back on, just before we went to bed.

I was sleeping in one of those nest-chair things, wrapped up in the top two blankets that were usually on my bed in Oberlin. It was actually a very comfortable and natural sleeping experience, because my head was cushioned and elevated over my body, and I sleep all curled up anyway. If you're a sprawler, I would not recommend sleeping in one of these chairs. Otherwise, I'd give it a great review. 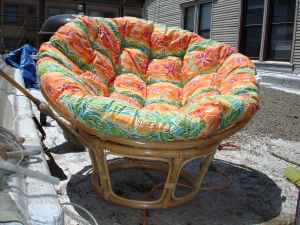 It was one of these kinds of chairs.

This story is getting far too long for just one blog, so I think I'll draw the veil there for this week. (Actually, for last week--sorry this is getting up a little late). Check back soon for the thrilling conclusion, in which we actually perform!! And are webcast live--the StudioBE folks were very excited about that.