Wondering where I've disappeared to lately? 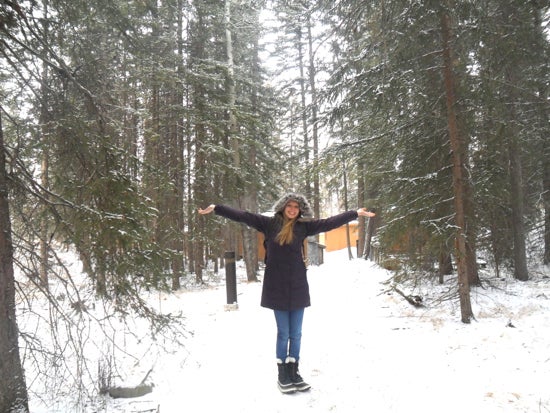 Narnia.
Every morning I walk along this path: 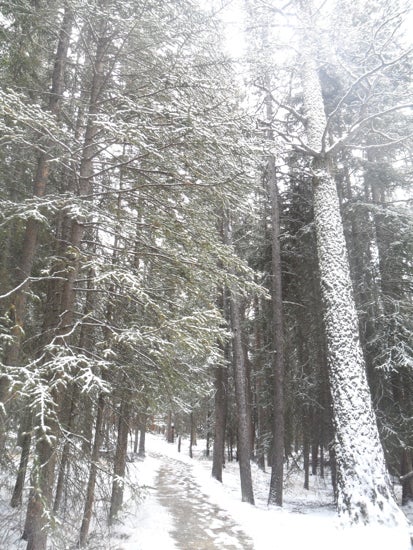 to meet Mr. Tumnus for brunch.
I never go to that mountain over there: 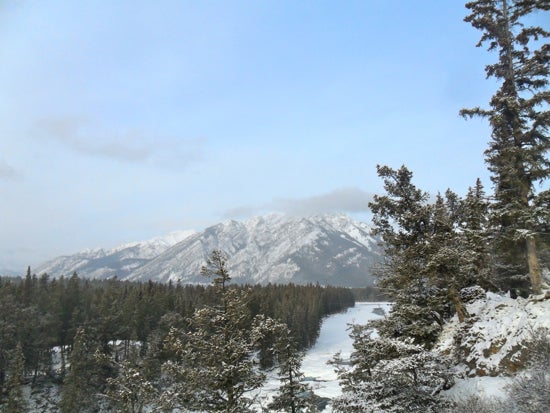 cos that's where the snow queen lives and her gelatin-free Turkish delight comes in a blueberry flavour, which I could never ever resist.
Sometimes I get hungry and eat a banana on the nearby beach: 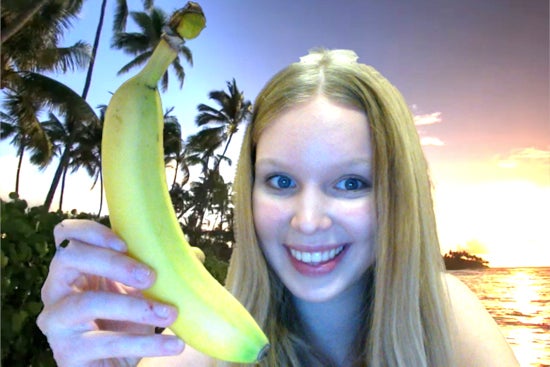 In the evenings, I pop over to Hagrid's (yep, Narnia backs onto the Forbidden Forest) for a cup of butterbeer with the werewolves: 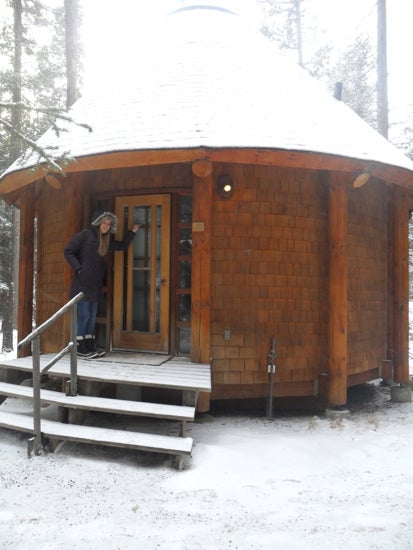 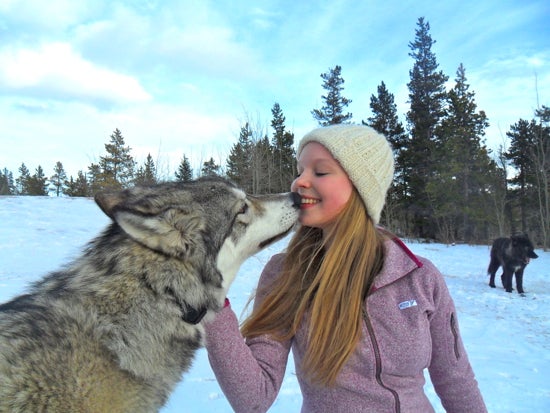 My trusty huskies know how to get from A to B with a lot of gusto and even more poop: 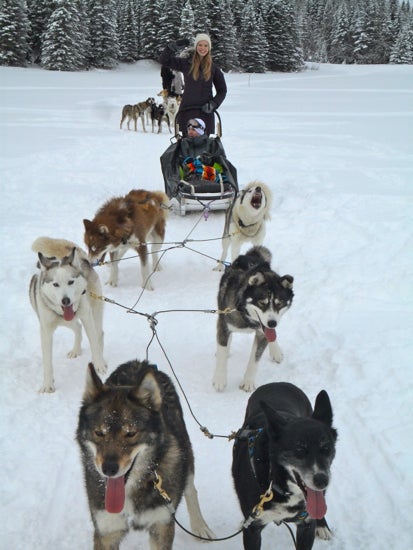 And that's my winter term! Done.

Alternative version...Narnia goes under the cover of 'Banff'. Yeah I know, surely if they were coming up with a cover name they could have come up with something a bit less suspicious, a bit more boring (and look what I found!) I mean, Banff? Have you ever heard of a more fantasy-ish name for a place? It should have its own series. The Chronicles of Banff. The Banffonites. Matthew, Mark, Luke and Banff. I would read that.

I am living at The Banff Centre. And was there ever a more mysterious name for a place? The Centre. Of what? No, just The Centre. Elk behavior studies?? Grizzly bear-inspired karate? Disney Princess Monopoly game strategy? (Best game ever, by the way.) Puppetry?

YES! It is The Banff Centre of Puppets. 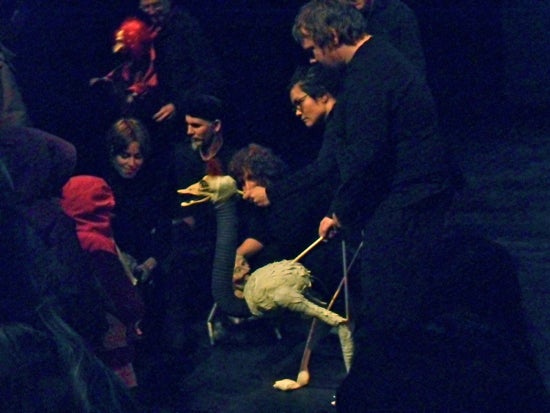 And also some music, possibly. But I didn't get a photo of that.
(I have just realized the little girl in that photo has no face. Erm...that's a dangerous ostrich.)

So I have been sent all the way up here with ten other Oberlin composition students and two professors, on a noble mission: sit in a hut, stare at snow and be inspired. Oooh! Basically, work bloody hard and write a bloody massive piece of music. How long? 3 weeks. PANIC ATTACK.

Calm down, remember, the huskies are coming soon!!

Banff is really, really cool. It's gooorgeous and crazy. Us resident artists get totally pampered - there's a massive swimming pool, sauna, gym, free concerts, we live in a what's basically a hotel, and the food is delicious. Oh, the fruit smoothies. Our professors give a few group seminars and private lessons whenever we need them, but basically we're left to work independently. We each have a particular project that we've decided to work on - for example, I'm setting poems, and other people are writing operas or string quartets. We're encouraged to collaborate with the many other musicians, artists and writers undertaking creative residencies here, and it's a very collective kind of environment. The whole trip is heavily subsidised - I only had to pay for flights, and $200 for everything else. I don't know how Oberlin wangled this one. It's a seriously great winter term opportunity and I feel really lucky to have been able to go. You couldn't ask for a better place to spend some productive time, have some space to think - and have a lot of fun, of course. 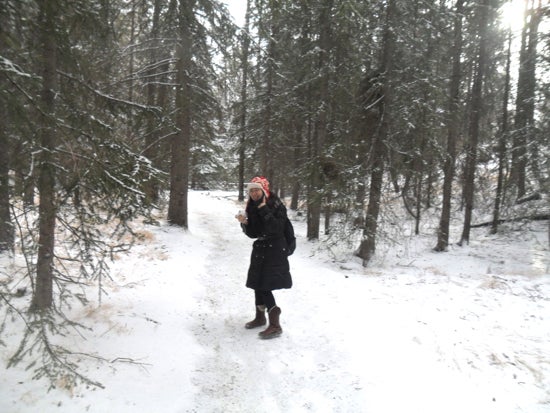 As you've probably worked out, I live to eat. In general, I am just so glad humans need food. I mean, otherwise, how on earth would I get from breakfast to dinner??

Here's a little tour of the Banffy campus:
I just realized, I took no photos of the dining hall! Please forgive me. 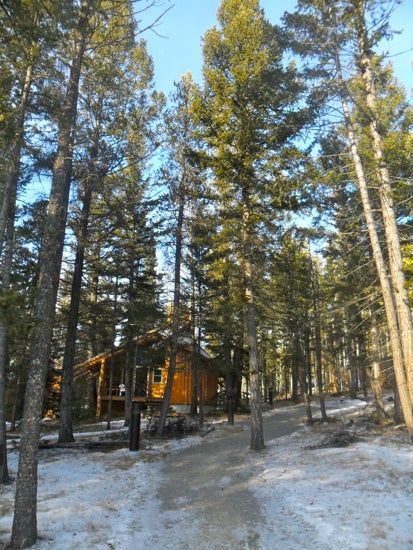 Another cute music hut in the forest, where writers/musicians/artists go to create their masterpieces. 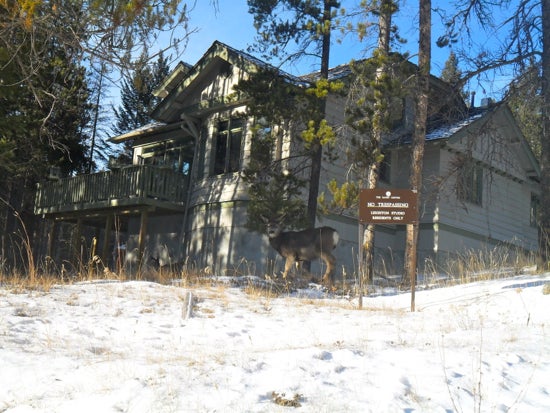 This is the Painter House, where we work, the deer pose, and I also sleep (shh). It's gorgeous. I have a lovely room to work in whenever I want, with a keyboard, a very comfy swivel chair and a great big mountain view. I compose in luxury. I've realized it's actually called the Pinter House, but because of everyone's US accents, I've been calling it the Painter House!! That's why they looked at me funny when I asked where it was. Anyway, Painter House is much better - more artistic.

Whenever I needed a break, these guys would show up at my window. I'd hear them a mile off - they're a bit clumsy when it comes to snow: 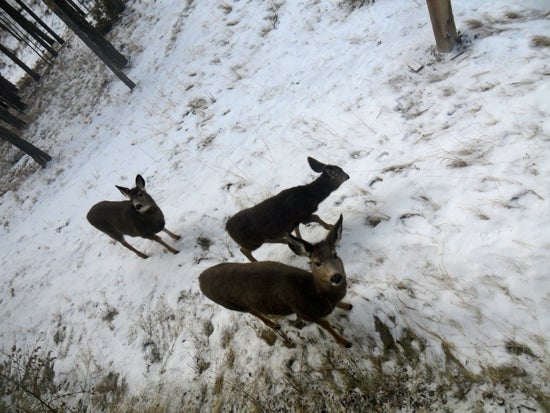 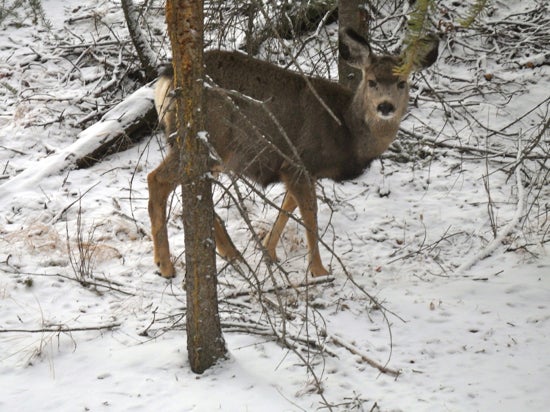 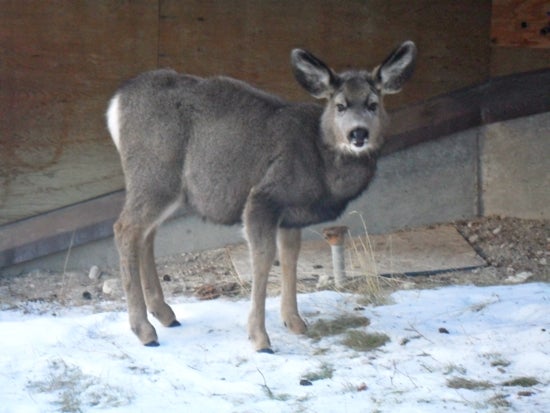 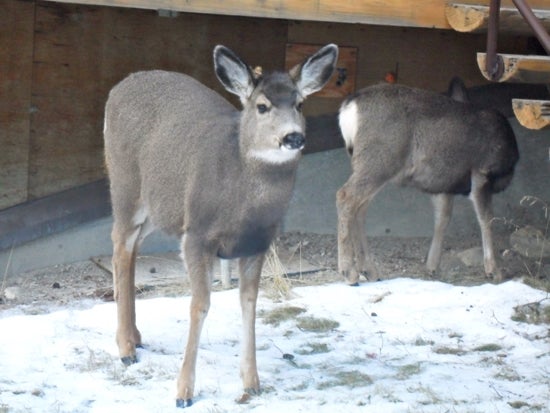 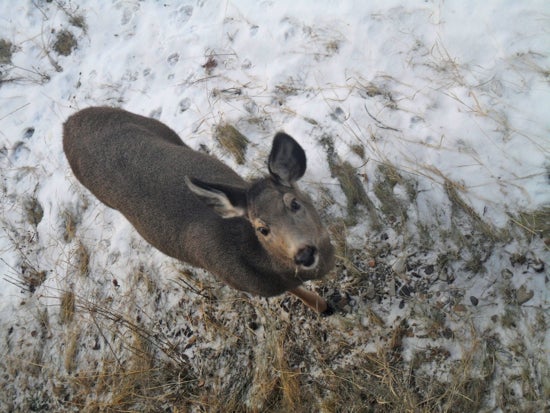 I was testing out my new broomstick when I took this last photo. Annie was impressed.

And here's a bird. Let's call her Gladys. 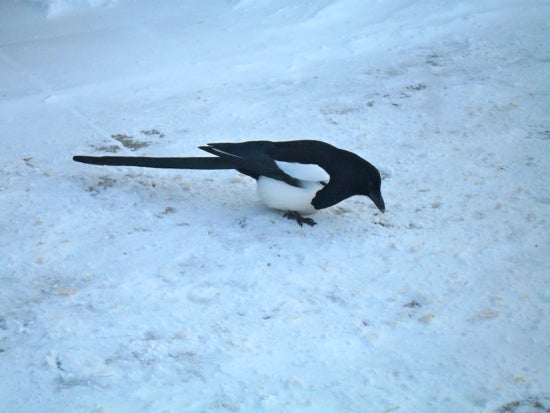 There are way more animals than humans in Banff, but there were actually a few other people around, hiding out in their huts - we're hard to pin down apart from at our feeding times, though. So I spent a few hours hanging out with the deer. Cold, yet relaxing. 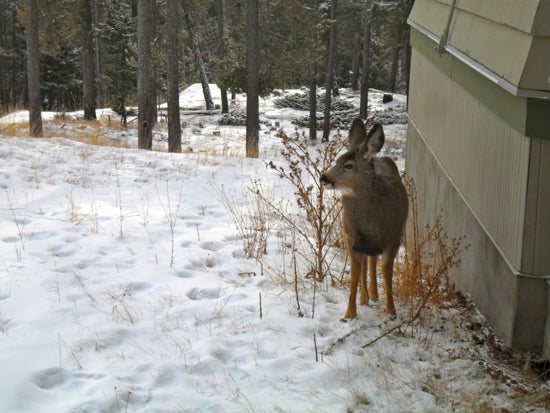 Someone's hiding under my window.

It turned out that the deer versions of Jane and Annie were also the eaters of the bunch. No surprise, really. In this award-winning deer documentary, entitled 'The Frozen Grass is Always Greener', Jane notices Annie has monopolized a juicy spot of grass, looks over enviously, then turns her nose up and stomps off. I think I should win a prize for so clearly proving the phenomenon of Deer Jealousy. Get ready to be amazed.

My scientific genius has come to fruition (no pun intended). Anyway, after this video, I couldn't actually feel my face any more so I went inside to write deer music and wait for dinner time.

You're probably still confused about the ostrich earlier on - basically, there was a 2-week 'Puppetry Intensive Workshop' at Banff. Puppeteers came from far and wide to hone their skills (I know, I didn't think it was serious at first either. But boy, were they serious. They worked from 9am to 2am every day!). Banff is full of these random things. During our visit there was also a Pork Seminar - yep, they talked about pork for a week. Not really my scene. Here are some videos from their final showcase - the puppets, not the pork, thank god. No words were allowed - it's all about telling a story through movement...so good luck figuring out what's going on!

Puppet chaos at beginning of show:

Why am I writing music? I should be a puppeteer!! We all should be puppeteers! The world would be a better place.

P.S. There may be one photo in this blog that was not really taken in Banff. Well it was, but it wasn't. You work it out.

Wow, those puppets are SO AWESOME. One of my dad's Oberlin friends does educational puppetry and your blog post took me back to meeting him several years ago. So cool!

Also, you were living in the wilderness and there are so many animals. Oh my goodness!

I would be inretested in your Mull workshop if there are places available.I would also like to book a one to one course with youthanks Ally

Oh my god, these spam comments crack me up! Or are you a real person, Alex?! Unfortunately, the Mull workshops (whatever on earth they are) are fully booked for at least a year in advance. And for one to one courses, there's a competitive application process akin to the Hunger Games. I'm in high demand. :P