Oberlin College seeks to prepare students to become engaged and informed citizens by providing essential information and resources to vote in local, state, and national elections.

The 2022 General Election will take place on November 8, 2022. The deadline for registering to vote at your current address in Ohio is October 11, 2022. If you wish to vote in Ohio, you must be registered at your current address; see below for information on voter registration.  Whether voting in Ohio, absentee, or by mail, be sure you are prepared and know when and how you can submit (or cast) your ballot.

Learn Who and What is on the Ballot

In Oberlin the ballot will include U.S. Senate, U.S. Congress, Governor,  Secretary of State, and other statewide offices, and the Ohio Senate, Ohio House, and county offices. There are also judicial elections for the Ohio Supreme Court, Court of Appeals, and the local courts.

See the list of candidates at the Lorain County Board of Elections.

Find out what's on your ballot

Plan Your Vote: Here’s How

You can request an absentee ballot by printing and mailing this form before November 5. Absentee voting starts October 12. Make sure you are correctly registered first.

Vote at the Polls on Election Day

After every 10-year census, each state adjusts the number and location of its federal congressional districts as well as those for the state legislatures. In 2015, Ohio voters amended the state constitution in an attempt to reduce partisan gerrymanders in the state legislature by creating a bipartisan redistricting commission and a set of rules to make it more difficult for the majority party to redraw districts in their favor. In 2018, Ohio voters approved a separate but somewhat parallel amendment to reduce gerrymandering for U.S. congressional districts.

In 2021, these two processes were implemented for the first time after a delayed census report due to the Covid-19 disruption. The commissions were unable to reach a bipartisan consensus, and new maps were approved based on the majority party (Republican) designs. A number of voting rights organizations, including the non-partisan League of Women Voters, filed suit against the redistricting commission, arguing that the maps approved for both state and federal legislatures are unconstitutional partisan gerrymanders.

In four separate rulings, The Ohio Supreme Court rejected as unconstitutional the latest Ohio House and Senate district maps. Earlier in 2022, the court ruled that the maps drawn for the federal districts also do not comply with the state's constitution anti-gerrymandering requirements. Nevertheless, the maps will be used for the General Election in 2022.  New maps will not be in place until 2024. 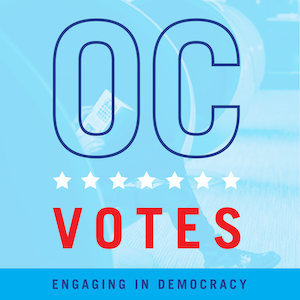 More About Voting at Oberlin College