Oberlin’s history of embodying leadership and empathy in times of political and social turmoil makes the title of the upcoming traveling exhibit, Courage and Compassion, especially fitting. The show, which explores the lived experiences of Japanese Americans during World War II — including Pearl Harbor, removal and incarceration, life in internment camps, and Japanese American veterans’ post-war struggle for redress — opens Saturday, February 17 in the Richard D. Baron ’64 Art Gallery.

The interactive exhibit has been touring since July 2017 and will eventually be displayed in 10 cities. Each pit stop was selected for the specific role it played in supporting Japanese people during the 1940s. Planned by the Go for Broke Foundation, organizers asked Oberlin to participate because of the school’s decision to recruit and admit nearly 40 Japanese American students during the war, and for Nisei (second-generation Japanese American) students’ activism. The local iteration of Courage and Compassion features permanent fixtures from the national show interlaced with pieces of Oberlin-centric history.

“This exhibit reminds us of a history that is extraordinarily relevant today,” says Renee Romano, the Robert. S. Danforth professor of history at Oberlin College and project co-director. “It offers us stories of local people who rejected wartime hysteria about Japanese Americans and who insisted that the United States live up to its democratic ideals. Today, as the nation again debates issues of immigration, citizenship, and belonging, it is vital that we grapple with America’s checkered history of exclusion.”

Romano is spearheading the project with Julie Min, an Oberlin resident and former exhibit developer who previously worked on public history projects about Japanese American internment. The two have arranged for an event series consisting of academic lectures, documentary film screenings, a performance by San Jose Taiko, and talks by internment survivors, including Alice Takemoto ’47, to accompany the show. Alumni from the Network of Oberlin Asian Alumni are also gathering to visit the exhibit on March 10.

“We thought about Oberlin’s particular history, both in its activism and its engagement with political issues of the day, but also its history of offering sanctuary to people who are vulnerable,” Romano says of how she and Min approached the exhibit. “It’s not like everyone at the time agreed or that these students came here and didn’t face any issues, but they did find that most people at both the college and in the town supported them, which is what makes this place very powerful. People stand up for each other in very interesting ways.”

Romano has prioritized making the exhibit accessible not just to the college community, but to local schools. All of Oberlin’s eighth graders will take field trips to the exhibit, and thanks to careful coordination and grant funding, each of the 18 fifth-grade classes from Lorain County will visit as well. Since there are so many classes coming from Lorain, these students will split into smaller groups upon arrival with one class spending an hour at Courage and Compassion and the other going to the Allen Memorial Art Museum, then vice versa. Afterward, the classes will congregate for lunch at StudiOC, where they will buddy up with Oberlin students to learn more about college life.

“It's been a point for us to make the field trip engaging,” says Ava Prince ’18, the exhibit’s field trip coordinator. “We’re doing an activity where students have to ‘pack a bag’ according to the restrictions placed on incarcerated Japanese Americans — no pets, no cameras, and so on. With the Oberlin students, I think it will be especially interesting to see our community portion of the exhibit, and for them to have a geographic connection to the past and take pride in their community.”

The first event associated with Courage and Compassion will take place Monday, February 12, when professors from the classics, comparative American studies, history, and Africana studies departments host the panel, “What is Sanctuary? From International Historical Concept to Oberlin’s Present.” Transforming the project’s lofty vision into a reality also required dedicated assistance from student researchers, faculty members from several academic departments, the deans offices, the Office of Development and Alumni Affairs, the Oberlin College Library, the Office of Communications, Oberlin College Taiko, the Oberlin Heritage Center, and Oberlin Shansi.

Nov. 30, Dec. 2 events to be followed by four additional artist-teacher visits, with virtual festival in summer.

Art in the Archives: Works Presented for the First Time 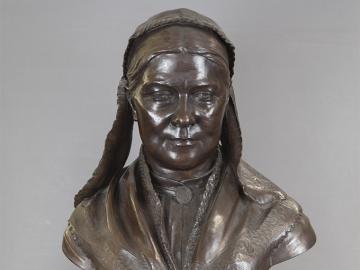 'Remaining Awake Through a Great Revolution'

On this Martin Luther King, Jr. Day we look back at the civil rights activist's visits to Oberlin College, and the powerful 1965 commencement speech he gave in Tappan Square. 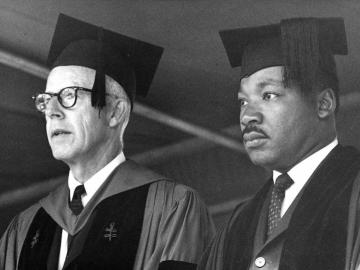