Kurtz joins the advancement team after serving for the past two years as director of philanthropic gifts at Hathaway Brown School in Shaker Heights, Ohio. As a relationship manager with alumnae and friends, he supported the success of Hathaway Brown's Lighting the Way comprehensive campaign. In addition, he led gift-planning initiatives and participated in annual giving efforts.

Kurtz earned a bachelor of arts degree at Baldwin Wallace University and a master of fine arts in performing arts management at Brooklyn College of the City University of New York (CUNY).

Before working in higher education, Kurtz’s career path includes work as an airline pilot for US Airways Express, general manager of The Cleveland Play House, and other fine arts organizations.

"We are excited to have Terry here. He comes with a strong background in alumni- and advancement-related leadership and work with volunteer councils and committees," said Grzesiak. "I look forward to working with him—and with the entire Oberlin community—to grow annual giving and lead a unified outreach effort to create and sustain commitment and engagement among Oberlin's alumni."

Ranked among the nation’s top liberal arts schools, Oberlin College and Conservatory is known for its exemplary academic and musical pedagogy and its commitment to social justice, sustainability, and creative entrepreneurship. The college, founded in 1833, holds a distinguished place among American colleges and universities as the first to grant bachelor's degrees to women in a coeducational environment and was a leader in the education of African Americans. The Conservatory of Music, a recipient of the National Medal of Arts, was founded in 1865, making it the oldest continuously operating conservatory in the United States. Oberlin Conservatory alumni enjoy illustrious careers in all aspects of the music world, achieving prominence as performers, conductors, composers, music educators, scholars, and arts administrators.

Oberlin Harnesses the Power of Community

On Thursday, April 23, 2020, the Oberlin College community rallied to celebrate what is truly good and beautiful about Oberlin. 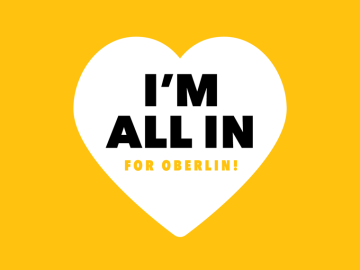