A double-degree student who splits her studies between philosophy in the College of Arts and Sciences and a self-designed conservatory major in contemporary vocals and electronics, Gruber has taken an unconventional path to where she is today.

Originally from Menlo Park, California, she arrived at Oberlin as a jazz voice major under professor La Tanya Hall, but she soon found herself gravitating toward TIMARA classes. She ended up with an individual major that allows her to incorporate her jazz vocal training with the experimental improvisation and extended technique elements of TIMARA. For Gruber, it’s the best of both worlds.

Fittingly, the music she creates strikes a balance between worlds as well. Gruber's classical, jazz, and contemporary musical training helps her see music from a unique perspective: “Vocal training has influenced my singing style a lot, and I’m really grateful to La Tanya for helping me hone my craft,” she says. “I would say that you can kind of hear the jazz influence, but there’s also a lot of what I learned in classical theory. I mostly just apply it on the aural skills side, having these cadences and this classical chordal structure, combined with jazz and pop.”

Gruber’s internet persona, diana starshine, combines vocal lines with synthesized and found sounds that are at times lush, at times high-energy. Gruber describes diana starshine as “a project with pop music taken to the extreme, with pretty experimental production. It’s very online. It exists sort of within a community.” And that community is growing: Her first single as diana starshine, “it’s love”—a collaboration with artists galen tipton and recovery girl—has been streamed more than 200,000 times on Spotify alone.

Collaboration is another important part of Gruber’s musical practice, and Oberlin is not short on options. She makes music with her housemates, as well as students in TIMARA and jazz. “It’s nice to have people around to collaborate with, but also to bounce ideas off of,” she says. “I do trust my vision, but I want to know what people think. It’s really nice having a community of artists.”

We caught up with Gruber, as she completes her fourth of five years at Oberlin, to talk about her musical lives on and off campus.

What is the origin of diana starshine?

I have a project that is pop-oriented that errs on the side of almost—not quite—satire. I think people can take it however they want. I’ve never said anything that I haven’t actually done. You could say it’s abrasive, I suppose...But I would say it extends more into “tasteful music” too.

At the same time, I am making music under my normal name, which leans more toward the electroacoustic side, where I’ve done collaborations with more “serious” people like Giant Claw (Keith Rankin). I am sort of bridging the gap between serious and not serious. A lot of the music I make takes inspiration directly from theory and aural skills from both jazz and classical. It’s really cool to have that approach to doing both popular and obscure/artsy music.

Aside from your vocal studies with La Tanya Hall, how has your conservatory training informed the music you’re making?

The [music theory and aural skills] classes I’ve taken with Arnie Cox have influenced my music so much, because it’s made me think a lot about theory as concepts and more from a liberal arts academic perspective, which is less based on just learning notes, but rather thinking more of overarching theory. That’s really useful for making pop music too because there’s a lot of thinking of memetic participation and expectation, how something will make somebody feel, particularly based on timbre, rhythm—all that stuff.

In what ways do you collaborate at Oberlin?

It’s really nice within the TIMARA and jazz departments to have people to work with, learn from, and play with. You can’t really go here without absorbing some of the aesthetics and attitudes. A lot of the stuff I’ve learned here is really useful. My housemates and I all do stuff together, and that’s really fun.

What’s next for you?

I have a whole other year here, which I am really excited about, because I feel like my practice has been developing so much. Up until now, I really didn’t have a lot of free time because I was trying to balance jazz, classical, and TIMARA. Next year I am only finishing up my college degree. I am really excited for my recital next year because I don’t know where I am going to go with it.

Oli Bentley is a fourth-year TIMARA major from Cincinnati, Ohio. She currently resides in Los Angeles. 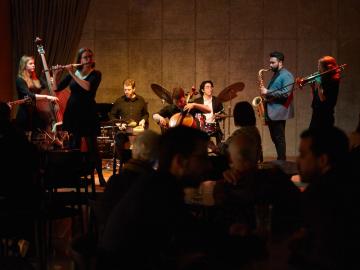 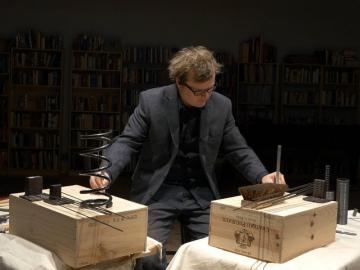 Principal harp of the Indianapolis Symphony Orchestra to begin in fall 2022.