Double-degree mezzo-soprano Perri di Christina '16 looks back on her Oberlin years and ahead to a special reunion.

Perri di Christina was a fifth-year double-degree student in 2015 when she learned that the Oberlin College Choir would be performing Aaron Copland’s In the Beginning that fall. She leapt at the opportunity to audition for conductor Gregory Ristow ’01 to sing the work’s solo for mezzo-soprano. And she won the job!

“It was a difficult piece and entirely a cappella,“ she says today, “but Greg gave me fantastic tips and tricks to navigate its complex musical structure.”

Now halfway through her master’s degree at the Mannes School of Music in New York City, di Christina still holds Oberlin near to her heart. And when Ristow chose Stravinsky’s Les Noces for the fall 2018 concert cycle, he invited di Christina to return as the mezzo soloist. She’ll be close to home when the Oberlin College Choir takes the piece on the road to Carnegie Hall on January 19. 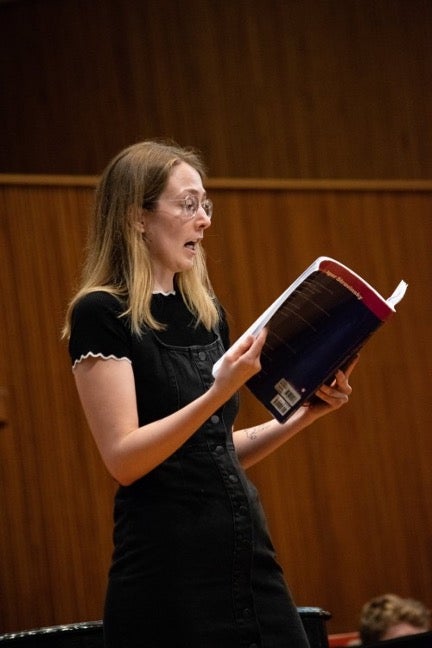 In preparation for a preview performance of Les Noces in Oberlin followed by her Carnegie debut, di Christina spent a week on campus before the holidays rehearsing with the choir—an experience she calls a “nostalgia fest.”

“I ate a bagel at The Local [Coffee and Tea] every morning and had dinner at Kim’s [Grocery & Carryout Restaurant] every night.” The young singer is honored to be part of the project, and she’s thrilled by all that she’s learned from the process so far. “Opportunities like this—coming back to your alma mater and debuting at Carnegie Hall—do not come around often, and I thank my lucky stars that I get to work with all of these incredibly talented Oberlin musicians throughout the process,” she says.

Les Noces involves a number of elements: four pianos, a full percussion section, a chorus, and four vocal soloists. Its thick musical textures and complex meter are hurdles that all members of the ensemble must overcome, but di Christina has additionally embraced the technical workout the piece provides. “The mezzo solo sits in a tricky place in my voice,” she explains. “The most rewarding part of the process so far has been feeling the piece gradually fall into my body. The intense work I’ve put into Les Noces has informed my technique in other repertoire tremendously.” She’s also enjoyed cultivating the Russian folk style in her voice, which Stravinsky likely would have appreciated. 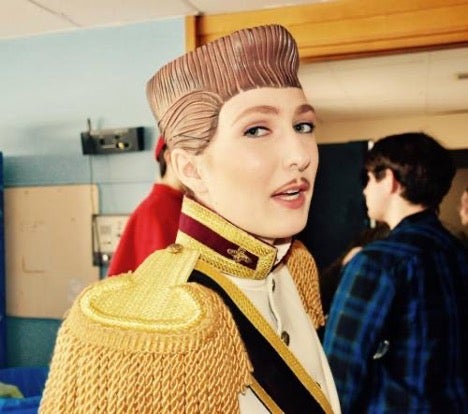 Thoughts of di Christina’s Oberlin days fill her with fond memories. “Oberlin gave me so much while I was a student,” says the former philosophy and vocal performance major. “Obviously, the whole experience of preparing and performing my first operatic role as Don Ramiro in Mozart’s opera La finta giardiniera is unforgettable. It was my first real role, my first taste of Mozart—one of my favorite composers to sing—and my chance to share the stage with some terrific rabbit costumes!” she says, a reference to one of many endearing staging devices employed by opera theater director Jonathon Field.

“I loved my philosophy of music class that was joint-taught by [Oberlin College philosophy professor] Katherine Thomson-Jones and Jamie O’Leary!” she exclaims, noting that she recently dug up the syllabus for that class online in order to jog her memory of a particular philosopher and consequently ended up re-reading half of the articles listed there. “That class married my philosophy and performance degrees beautifully.”