An expansive collection of artifacts spanning centuries of American music was gifted to Oberlin in 2008 to enable study by scholars for generations to come. That collection will now be made readily accessible to researchers through the creation of the Frederick R. Selch Center for the Study of American Culture.

The Selch Center’s opening will be celebrated with an inauguration event at 4:30 p.m. Wednesday, October 5, in Stull Recital Hall (77 W. College St.) on the campus of Oberlin Conservatory. The program will feature a selection of artifacts from the Selch Collection and a talk on late singer and activist Paul Robeson (pictured), presented by noted music historian Thomas Riis, a 1973 Oberlin graduate.

The event is free and open to the public. For more information, please visit the Oberlin Events Calendar.

ABOUT THE SELCH COLLECTION: Throughout his life, New York City publisher Frederick Selch—known to friends as Eric—was fascinated by music, and he amassed with his wife Patricia an enormous collection of unique instruments and seminal books that document the history of North, Central, and South American music through the ages.

In 2008, the Selches gifted their collection to Oberlin. Included are some 800 instruments, 9,000 rare books, and a large collection of artworks depicting musical themes. Since its arrival on campus, the Selch Collection has been used for research by Oberlin students and faculty, as well as visiting scholars.

The Selches also established the Frederick R. Selch Professorship of Musicology, a faculty position held by James O’Leary. In 2012, Oberlin unveiled the Selch Classroom, a technologically superior learning space in the main conservatory building, Bibbins Hall. The Selch Classroom serves as the symbolic home of the new Selch Center.

The Selches made their gift to Oberlin with the confidence that it would foster study not merely of American music, but of American culture in a broader sense. To that end, Oberlin has convened a panel of faculty, staff, and students from both sides of campus to facilitate the implementation and support of cutting-edge, interdisciplinary research across the sciences, humanities, and the arts.

“What I love about the center is that it includes not only people from a broad category of academic disciplines, but also from all branches of Oberlin: students, faculty, staff, and administration,” says O’Leary. “What brings us together is our passion for what we all study, to remind us that we are a community of scholars and thinkers, and that our work is devoted to knowledge and performance.”

This fall also marks the first class of Selch Fellows, student scholars selected by a faculty panel through an application process in spring 2016. These fellows—Julian Cranberg, Nora Cooper, Isabelle Harari, and Sofia Pierson—all hail from Oberlin’s College of Arts & Sciences and will pursue research projects involving Peruvian music, linguistics, folk literature, and the intersection of legal and religious policy in present-day Massachusetts.

“Given the range of interests and talent here at Oberlin,” O’Leary says, “I think the center will be an exciting place in the years to come.”

ABOUT THE TALK: The October 5 program will feature a talk by Riis, a professor of musicology at the University of Colorado Boulder and a member of Oberlin’s Board of Trustees. Riis will present “Paul Robeson: Artist and Activist for Our Time.” A remarkable figure for numerous reasons, Robeson was born in 1898 and graduated first in his class at Rutgers College, where he was a two-time All-American football player and one of only three black students at the school. He graduated from Columbia Law School while playing in the National Football League and acting on stages in the U.S. and England. Celebrated around the world for his artistry, Robeson made 11 feature films, recorded hundreds of songs, and could speak and sing with his deep bass voice in 20 languages. He also became an outspoken advocate for human rights long before the Civil Rights Movement took hold in America. But Robeson’s political principles—he supported various Soviet policies—led to his being blacklisted during the McCarthy era, transforming him from international stardom to relative obscurity in the U.S.

“I got excited about doing work on him in 2006, after learning of an archive of his letters in Berlin,” says Riis, who is writing a book about Robeson. “My research is focused on fleshing out the details of how Robeson became the great musical figure that he was—especially during his almost 10 years of living abroad, from 1929 to ’39.”

The Hollings Scholarship provides academic assistance for two years and a 10-week paid summer internship at a NOAA facility. 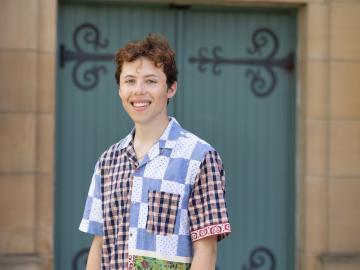