New York and Chicago may be theater powerhouses, but no city is more central to the history and vitality of English-language theater than London. The 2016 Theater in London winter-term trip allowed 12 students the chance to experience the history and variety of the London theater scene firsthand. For two weeks, the students studied theater in performance by preparing for, attending, and discussing 10 plays currently in production.

The trip was led by David Walker, professor of English and creative writing, who is no stranger to London. He has taught and led the Oberlin-in-London Program six times and co-directed London theater trips for Oberlin alumni every other summer since 1996. He has also lived in London for extensive periods and says he knows it well. “I love introducing students, and others, to one of the most dynamic cities on the planet,” he says.

Each morning the group met for discussion and regrouped later in the evening to attend the performances, which included both classic and contemporary works. There were also organized excursions to the reconstructed Globe Theatre and Exhibition, a backstage tour of the National Theatre complex, and visits to relevant exhibits at the Museum of London and the Victoria & Albert Museum.

“I chose to go on the Theater in London winter-term trip for a few reasons,” says third-year English major Gracie Freeman Lifshutz. “The main reason was that I am very passionate about theater and the performance arts, but I had never really gotten the chance to study them in depth. The opportunity to study the theater culture of a place like London, which is such an artistic and cultural hub, was one that was too exciting to ignore.”

The New York City native says the experience has changed the way she approaches theater. “While studying abroad this semester, a friend and I went to see a play at our local theater, and I could feel the difference in my approach to it. I found myself watching it and thinking about it more closely, and I think it enhanced the experience for me. Whenever I see or read a piece of theater now, I know that I have a greater vocabulary and framework to approach it with.”

Second-year Will Osborn agrees that the experience has helped him appreciate theater differently. “I certainly feel more connected with what’s happening onstage,” he says. “There’s not a self-imposed barrier of ignorance between me and the stage. I feel like I’m worthy of being in my seat at a show.”

In addition to learning more about theater, second-year Charlie Kimball says the trip’s flexible schedule left a lot of time for the students to explore London and the United Kingdom on their own terms. Each student received unlimited metro and bus passes, which he says made travelling throughout the city easy and allowed him to experience London’s thriving music scene. One of his favorite moments from the trip was when some of the group took an excursion outside London to Dover Castle.

“I was a bit of a war-history nerd when I was younger and it was exciting to see how much history was still intact from battles that happened 800 years ago. I think that living in the U.S. can give you a weird frame of reference for historical narratives. A historian at the castle mentioned that it’s not unthinkable to go into your backyard and accidentally stumble upon an 1,800-year-old piece of clay pottery from when the Romans held Britain,” he says.

Walker says that from his perspective, the trip was a tremendous success. “The group bonded and learned a great deal from each other, and I think they came away from the project with an enhanced understanding of and appreciation for theater. It was a great pleasure to introduce them to my favorite city.”

Jakob Faber ’21 explored ways to broaden the scope of branched flow with the goal of introducing work that has been done in radio astronomy and radio geophysics into the field.

Many areas of the country saw significant drops in pollution levels when stay-at-home orders were put in place several months ago. The effects on the atmosphere suggested to Devin Williams ’21 that there might be other factors to investigate. He joined a team of students who assisted Professor of Psychology and Environmental Studies Cindy Frantz in a project that would lead to the study of COVID-19 on psychological factors. 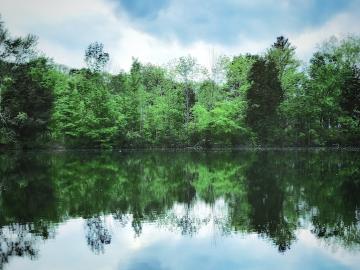