As an early December snow fell outside the third-floor windows of Stull Recital Hall, a string quartet warmed the space inside with a performance of Peruvian composer Celso Garrido-Lecca’s Cuarteto No. 2. 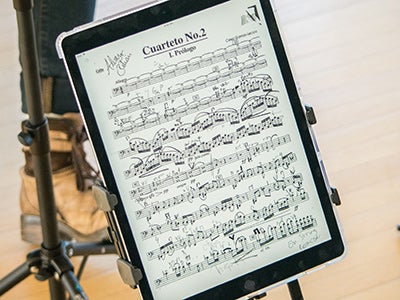 The emotionally charged piece, which honors a former colleague of the composer who was murdered by Chilean government officials, has likely never been played at Oberlin in the 30 years since it was written—and certainly never quite like this: In place of the usual music stands were four slender tripods supporting iPads.

The quartet, made up of conservatory violinists Molly Tucker ’20 and Riley Calcagno ’21, violist Emily Edelstein ’18, and cellist Raffi Boden ’19, is piloting a new initiative to incorporate the technology in the practice room and on the stage—a relatively new phenomenon that has begun to gain traction among musicians since the advent of Apple’s largest-ever iPad Pro in 2015.

The ensemble’s early rehearsals revealed the great challenges in Garrido-Lecca’s score. “We kept joking that with the music we were using, we needed iPads,” Edelstein recalls.

And they had company at Oberlin. In recent years, several faculty members and numerous guest artists have used iPads in performance on campus. With a 12.9-inch screen that approximates the size of a single page of sheet music, the device can be equipped with music apps like forScore, which allows musicians to “turn” pages with the click of a Bluetooth-enabled foot pedal or a quick tap on the screen, in addition to offering essential tools such as tuners, metronomes, and recording capability. The device’s available stylus makes it easy to mark up scores, and since each iPad is backlit, no cumbersome stand lights are required—making them particularly useful in low-light settings.

The potential benefits of iPad use had already been discussed among conservatory administrators and Oberlin’s Center for Information Technology. CIT, in fact, spearheaded the purchase of 12 iPads for the conservatory’s newly renovated piano lab in 2014 and was supportive of the notion of expanding the technology.

As the quartet prepared to take on Garrido-Lecca’s dense score, the timing seemed right for a trial run. With support from CIT, four iPad Pros with forScore, custom stands, and necessary accessories were purchased and shared with the ensemble. 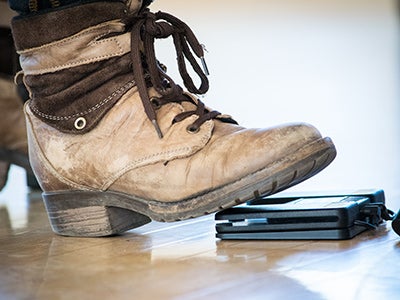 “People have performed this work before without iPads, but the numerous and fast page turns were the initial problem the quartet had to figure out,” says Professor of Conducting Timothy Weiss, who coached the ensemble for two December performances of Garrido-Lecca. “The iPad solves all of that with the foot pedal. The ease in visual communication—especially with chamber music groups—is also one of the biggest challenges the iPad addressed for this quartet. The students using the iPads are finding all kinds of subtle advantages while learning parts and performing.”

The quartet began its pilot program by becoming acclimated to the software and test-driving several kinds of foot pedals. Though the new technology came with a discernible learning curve, the benefits were very quickly evident.

“It’s a really helpful tool for organizing our music in the way we want to,” says Tucker. “In some places, we wanted to be able to see the entire score when all the parts are on one page, rather just our own part, and with the iPads it was easy to have it pop up when we wanted that.”

The devices’ many useful functions, as well as their slimmer profile, also enabled the musicians to more freely interact with each other—and their audiences.

“It was one of those things that just fell into place,” says Edelstein. “Being able to make eye contact and see each other’s instruments—and getting closer to another level of reading each other’s minds and anticipating next moves, rather than just reacting—really helps you connect.” 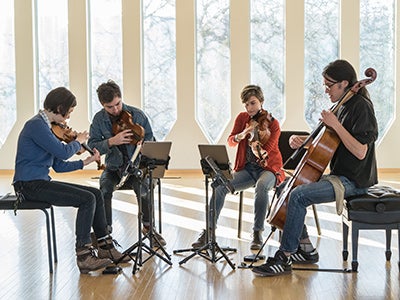 “The thing that I’m working on a lot in chamber music is being able to get my energy from and interact with the people I’m playing with,” says Tucker. “Because the iPads were smaller [than sheet music stands], we were able to get a lot closer, and I felt like in the end, the physical music wasn’t a barrier to me interacting with the others.”

“I'd say that 50 percent of the music we perform comes from self-published composers who send us PDFs,” says Weiss, who directs the Contemporary Music Ensemble and Sinfonietta. “It's easy to upload all that into iPads. For the first time, we can now easily edit the score and individual parts during the rehearsal process on the way to the end product. The forScore app allows you to make a change on one iPad, and that edit goes to every other person's device in the ensemble. And it's not just from the conductor's score: A section leader can also change a bowing or a rhythmic grouping pattern, and the changes appear throughout the section.

“Note-taking on an individual part can sometimes get very dense,” he adds. “The iPad makes it easier to make notes on layers that can easily be removed once those rehearsal or practice notes are absorbed, ultimately making the part cleaner and easier to read by the time you get to performance.” 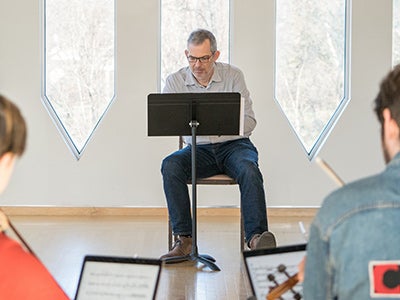 Like many musicians, Weiss empathizes with those who cling to paper scores and who value the penciled-in markings that pile up over the years like so many rings on a tree. Plus, he adds, his 50-year-old eyes haven’t quite adapted to reading notes on a screen.

But now that he has begun uploading scores into his own iPad, Weiss also finds benefit in not being weighed down by cumbersome texts. He has yet to conduct a performance from an iPad, but plans to do so for the first time this spring.

“The iPad can so easily remove some of the challenges we face in rehearsal and performance,” he says. “Rehearsals would be much easier. There are pieces where you need to see how your part fits in. Having everyone just pull up the score on their iPad in the middle of a rehearsal would make things understandable more quickly. If everyone had the score on their stand, it would be amazing!”

Role focuses on African American and African diasporic musics, aligns with studies in both the college and conservatory.