Heralded soloist and chamber musician to begin in fall 2020.

Violinist Francesca dePasquale, a performer and teacher whose playing has been hailed by Musical America as “scintillating,” will join the Oberlin Conservatory string faculty as Assistant Professor of Violin, an appointment that begins with the 2020-21 academic year.

DePasquale comes to Oberlin after four years on the faculty of Rutgers University’s Mason Gross School of the Arts. She has also taught in the Juilliard School Pre-College Program and as an assistant in the College Division, the Heifetz International Music Institute, and the Perlman Music Program Sarasota Residency.

She served as a visiting professor at Oberlin in fall 2018. 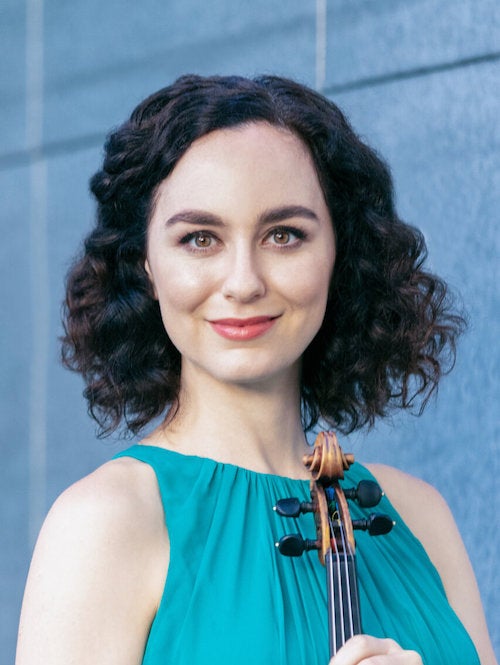 “That experience was really eye-opening to me in showing how incredible Oberlin is as a school, town, and community,” says dePasquale. “The students and the school create an atmosphere that is extremely special, one of artistic excellence and intellectual curiosity. That I will be a part of this community and support that atmosphere is absolutely fantastic.”

Raised in a very musical family—her mother is a longtime cellist with the Philadelphia Orchestra, and her late father was the orchestra’s co-concertmaster—dePasquale was a prodigious performer from a young age. She debuted as soloist at age 9 for a tour of Spain with the Main Line Chamber Orchestra.

DePasquale won first prize in the 2010 Irving M. Klein International String Competition, one of the most prestigious competitions of its kind. She was honored in 2014 with a career grant from the Leonore Annenberg Fellowship Fund for the Performing and Visual Arts. The following year, the Classical Recording Foundation named her Young Artist of the Year.

DePasquale’s robust performance career includes extensive work in solo and chamber settings. She is a founding member of the Aletheia Piano Trio, which formed at the Juilliard School in 2013 and has performed in such venues as Lincoln Center’s Alice Tully Hall and the Kennedy Center’s Terrace Theater, in numerous festivals, and on tour in China in 2018 and 2019.

DePasquale is on the artist roster of Manhattan Chamber Players and Noree Chamber Soloists, and performs with Chameleon Arts Ensemble and Orpheus Chamber Orchestra. She has collaborated with a long list of standout musicians including Adrian Brendel, Paul Coletti, Kim Kashkashian, Itzhak Perlman, and Donald Weilerstein, and she has appeared as soloist with the Gustav Mahler Orchestra, the Bach Festival of Philadelphia, Colburn Orchestra, Galesburg Symphony, Peninsula Symphony, and Santa Cruz Symphony, among others.

“For me, music is at its most powerful when it’s a reflection of the human experience,” dePasquale says. “The type of repertoire I like to take on usually reflects that in some way, and that can be through old as well as new music.”

True to form, dePasquale’s self-titled 2016 debut recording features music ranging from Bach’s Partita No. 2 in D Minor to a new commission for violin and electronics by Paola Prestini. An accompanying tour drew accolades for dePasquale’s “sincerity” and “intensity” (Philadelphia Inquirer) as well as her “immaculate and discreet phrasing” (The Strad).

“Being able to draw from the perspective of an active performer and take those experiences back to my studio is really invaluable to my students, and I know that the balance of teaching and performing, on a personal level, has always left me most fulfilled,” she says. “It creates a relevance and a context for what we’re discussing, and it also continues my own evolution. No artist is ever complete, of course; I can continue my own artistic explorations and share this organic growth with others.”

DePasquale is a graduate of Juilliard and the Colburn School. Her teachers have included Itzhak Perlman, for whom she served as the Starling Fellow teaching assistant from 2013-16; Catherine Cho; and Robert Lipsett. Previous teachers include Hirono Oka and William dePasquale, with additional mentorship from Norman Carol.

“It is a tremendous privilege to welcome Francesca dePasquale to Oberlin,” says Dean of the Conservatory William Quillen. “She is a performer of superlative skill, and she excels in mentoring highly talented young musicians. She will be an extraordinary asset to our students and community.”

“Francesca dePasquale is a brilliant violinist and an outstanding teacher,” says Bowlin, who serves as chair of Oberlin’s Division of Strings. “She is already well known to faculty and students at Oberlin through her exemplary work as a visiting violin faculty member, and we are thrilled she will be joining us full time.”

Three Oberlin faculty members have been awarded individual grants from the Ohio Arts Council to continue their creative projects.