Emeritus Professor of Physics Dan Stinebring is a senior member of the North American Nanohertz Observatory for Gravitational Waves, known as NANOGrav. The group consists of about 120 astronomers and physicists from the United States and Canada who study how gravitational waves affect the universe and our Earth.

Recently, NANOGrav has discovered an exciting low-frequency signal, which might be coming from gravitational waves.

“We’re seeing evidence in our data that is consistent with gravitational waves,” says Stinebring. “At this point, we're agnostic about where those gravitational waves might be coming from. Our expectation is that the most likely source is supermassive black holes at the centers of galaxies.”

At NANOGrav, Stinebring studies pulsars, which are dense clock-like stars, made when massive stars blow off their outer layers during a supernova explosion. The remnants of these massive stars are a special class of neutron star, which rapidly spins around their rotational axes. As these neutron stars spin, they generate pulses of radio waves, which astronomers detect using the world’s largest radio telescopes.

Gravitational waves are ripples in space-time triggered by extremely massive objects moving, which could possibly be orbiting black holes or colliding neutron stars. Scientists monitor these ripples by measuring very small changes in the locations of objects, such as Earth itself.

“Over the past 15 years, we have set up to look for irregularities in the timing of the ticks of the pulsars that would indicate the presence of gravitational waves,” Stinebring says. “We’ve noticed that pulsars are jiggling around and they're all jiggling around at about the same level of disturbance.”

The presence of gravitational waves can cause irregularities in the timing of the pulsar ticking, as the ripples create stretching and shrinking in space-time. This change results in tiny fluctuations in the expected times of the pulsar signals, which tell us that earth’s position has changed.

Though Stinebring no longer teaches classes at Oberlin, he still works as an emeritus faculty researcher and also mentors several students. His research is funded by two grants from the National Science Foundation, one through the NANOGrav Physics Frontiers Center and one directly to Oberlin College, that support his exploration of the interstellar medium using pulsars. Both grants provide funds for student support during the academic year and summer.

“I've been working with about three students a year, trying to understand exactly how much the pulsar signal gets delayed by traveling through the interstellar medium or the gas between stars. That’s what I train Oberlin students to work on, and we work side-by-side,” Stinebring explains.

Jakob Faber, a fourth-year physics and philosophy major, began working with Professor Stinebring on radio astronomy during his first semester at Oberlin. He has collaborated on projects and research modeling scintillation in pulsars, studying fast radio bursts, and investigating branched flow. In addition, Jakob’s research experience has involved several major science conferences and some international travel.

“During the summer following my second year, Professor Stinebring took me and Hengrui Zhu to a conference on scintillation in Hermanus, South Africa. We spent ten days listening to fascinating talks, having deep discussions with brilliant scientists from around the world, and hiking through gorgeous mountains and vineyards. That trip will always be one of my favorite memories at Oberlin and probably my life.”

Hengrui Zhu is a fourth-year math and physics major who has also studied alongside Stinebring since his first year at Oberlin. In their research, Hengrui has helped observe pulsars and analyze the data with numerical models and theoretical analysis.

“I have had so many memorable experiences. I gave my first academic talk at a global conference held in Shanghai, China, when I was a sophomore. Our trip to South Africa for a conference in the summer of 2019 was another memorable one. Studying the neutron stars hundreds of light-years away has always been a privilege, especially with Dan's supervision.”

The feeling is mutual—Stinebring also enjoys the collaboration.

“The wonderful thing about working with smart Oberlin students is that very quickly they are asking me questions that I can't quite answer. It leads us in new directions and we have so much fun trying to figure things out, and the students have some amazing experiences along the way.” 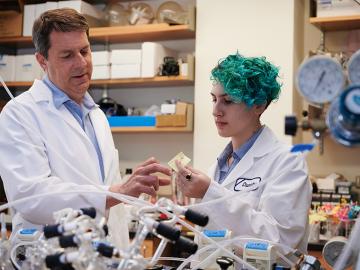 A published manuscript coauthored by Ella Halbert ’23 offers software tools that pathologists could use to assist with a tedious, yet necessary process in the study of disease. 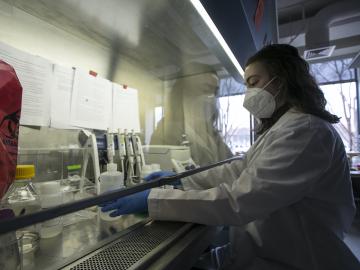