The competition has intensified on the Oberlin campus, where the field of participants in the 2013 Cooper International Competition has been narrowed from 24 to 6.

The top 10 young violinists performed in the Concerto Round on Tuesday, July 23, after which the jury determined those whose quest for first prize would continue. Advancing to Wednesday's Recital Finals are:

Recital Finals will begin at 7 p.m. in Warner Concert Hall on Wednesday, July 24. The top three Recital Finalists will advance to the Concerto Finals on Friday, July 26, at Severance Hall. There, they will perform with The Cleveland Orchestra under the direction of conductor Jahja Ling. On the line will be cash prizes totaling more than $20,000, as well as three full scholarships to attend the Oberlin Conservatory.

In addition, top performers not advancing to the Concerto Finals will take part in an Honors Concert in Warner Concert Hall at 7 p.m. on Thursday, July 25.

The Recital Finals and Honors Concert are free and open to the public. Tickets for the July 26 Concerto Finals at Severance Hall start at $15 and are available at the Severance Hall Box Office or the Cleveland Orchestra website.

Young pianists vie for $40,000—including a first prize of $20,000. Finalists perform with the Cleveland Orchestra, earn full scholarships to attend Oberlin. 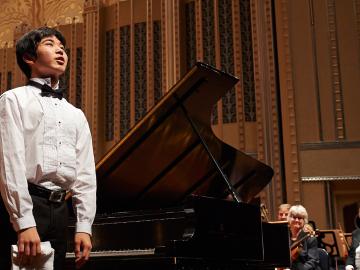 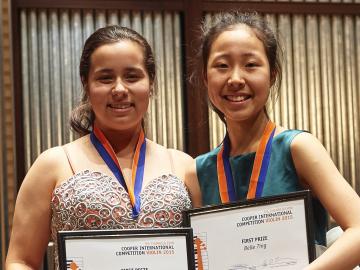